A regional alliance of researchers is giving voice to an under-resourced community. 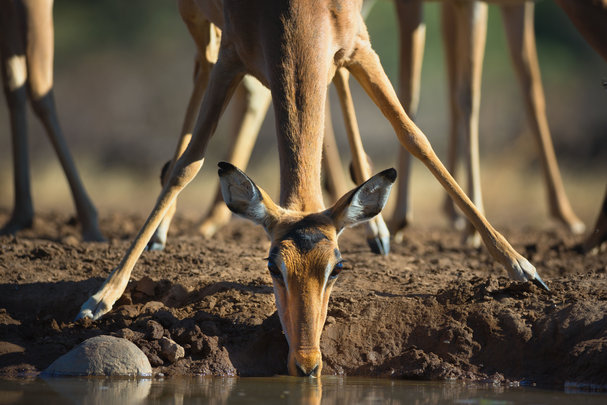 An antelope drinks at a watering hole in South Africa. The region's rich natural environment is a valuable resource for science.

In 2017, Johann Mouton and Astrid Valentine published a paper that shocked and dismayed South Africa’s research community. They estimated that the government had paid up to R300 million (US$25 million) to academics for publishing articles in predatory journals through a scheme that financially rewards productive researchers.

Mouton and Valentine were the first to quantify the scale of South Africa’s problem with dodgy journals, one of the many weaknesses that the African Research Integrity Network (ARIN), conceived in 2015, is trying to address.

“We hope to create awareness amongst all sectors and stakeholders of the research enterprise in Africa about the importance of research integrity,” says Francis Kombe, ARIN co-chair and a UNESCO bioethics trainer.

Ensuring research integrity is imperative to building confidence in the body of work and knowledge produced in Africa says Allen Mukhwana, research systems manager at the African Academy of Sciences (AAS).

A continent rich in natural and human resources, Africa offers a host of research opportunities for individuals and teams working across all disciplines. The region’s research strengths, says Mukhwana, lie in its genetic, cultural and environmental diversity. Pockets of excellence have emerged in disease study, such as the Zika, Ebola and Marburg viruses in Uganda, as well as malaria research and some zoonotic diseases like brucellosis and elephantiasis that are particular to Africa, he adds.

A recent Web of Science analysis, published in Scientometrics in February 2018, found that South Africa produced more than a quarter of the 369,683 papers from Africa between 2000 and 2015. Egypt contributed to more than a fifth of the total. In the most recent five-year-period, Africa's top subject was chemistry, accounting for 6.4% of papers, followed by engineering (5.4%) and physics (4.9%).

South Africa also led the region in the Nature Index, with a weighted fractional count (WFC) in 2016 of 60. The majority of high-quality research papers from Africa were in the physical sciences, followed by the life sciences.

But the region has also been plagued with cases of research transgression, as Mouton’s study pointed out. Between 2005 and 2015, researchers in South Africa published some 4,000 papers in journals classified as predatory, accounting for 3.4% of the country’s total output.

ARIN is beginning to address the problem of research integrity in Africa by sensitizing researchers and empowering them to be more proactive in improving the situation, says Kombe, who has contributed to international discussions on responsible conduct through such platforms as the Science Forum South Africa and the Southern Africa Research and Innovation Management Association. The long-term goal is to respond to cases of misconduct, he says.

In December 2017, the International Network for the Availability of Scientific Publications and African Journals Online developed a framework to help researchers differentiate between reputable journals and predatory publishers.

For ARIN to be successful, Mukhwana says, it will need to coordinate with these and other initiatives.