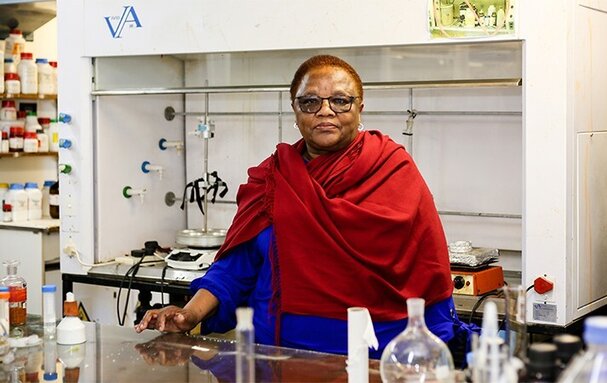 From fish scales to the nano scale, these three scientists are drawing on natural inspiration, and novel tools, in the search for new materials as solutions to long-standing problems.

For more than ten years, Juha Song has been fascinated by fish. Specifically, the grey bichir (Polypterus senegalus), the three-spined stickleback (Gasterosteus aculeatus) and other species with armour-like scales that are among the most ancient living fish.

“It’s a very interesting system because the scales that protect the fish body are very rigid, but help the fish move and be flexible,” says Song, who started studying the prehistoric creatures during her PhD at the Massachusetts Institute of Technology in Cambridge.

Could body implants, such as bone plates and cardiovascular stents, be designed to offer a similar balance between suppleness and protection, she wondered? The trick, Song soon discovered from the fish, was to give the implants’ hybrid magnesium coating a wavy — rather than flat — surface. 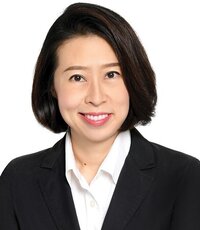 “In this way, you can avoid any critical stress between those rigid and soft materials,” she says. “Fish solve this problem by using a pattern on their body, and so we did the same.”

Song, now an assistant professor at Nanyang Technological University (NTU) in Singapore, describes herself as a materials scientist, structural designer and interface engineer, all rolled into one.

“I try to make materials work better through certain structural designs,” she says. “I focus on interfacial issues [relating to a common boundary] because they can be easily resolved by bio-inspiration from nature.”

Nature has much to teach us, says Song, who moved around a lot growing up, thanks to her father who was in the armed forces. Some places were very rural, she recalls, “and my only friends were the trees and animals”.

Animals and plants have adapted to “maximize their survivability”, she says. “Nature can cope with many different problems in many different ways. It doesn’t always give you the best solution, but it gives you inspiration on how to approach a system.”

Song has developed a number of bio-inspired materials, including a flexible battery and, in collaboration with City University of Hong Kong researchers, a microneedle patch for transdermal drug delivery.

In a 2020 paper, Song and her NTU colleagues described how they transformed sunflower pollen — one of the toughest known plant materials — into a soft microgel material, with potential applications in eco-friendly polymer gels, stimulus-responsive paper and biomedical scaffolds.

Song has pioneered a method to 3D-print live cells for use in biomedical scaffolds or in vitro test-beds for drug screenings, without killing them in the process; a technique inspired by the hard, protective coatings of seeds.

These cells can be made to lie dormant, she and her colleagues found, then later activated by applying a special biochemical agent.

According to Song and her co-authors, this ‘cell-in-shell’ technique can be used to transport living cells at room temperature, bypassing the need for freezing, which can damage or kill them. — by Sandy Ong

Tebello Nyokong, a South African chemist, is developing nanomaterials containing photosensitive dyes for use with lasers to attack certain types of cancerous cells.

Photodynamic therapy is a non-invasive, low-toxicity method of causing cell death used to treat a wide range of medical conditions, including several forms of cancer. Dye particles are ingested, injected or applied in a cream, and after they have built up in the body, a laser is applied to targeted cells, either externally or via an endoscope.

When the photosensitive dye is excited by a laser, it can react with the oxygen in cell tissue to produce a highly reactive form of oxygen molecule called singlet oxygen, which can destroy cancerous cells. In a February paper, Nyokong and her colleagues reported on a new photosensitive dye, finding it was suitable candidate for further research to treat breast cancer.

Nanomaterial research requires extremely expensive equipment to understand matter on an atomic or molecular level, says Nyokong, who is director of the Institute for Nanotechnology Innovation at Rhodes University in Makhanda, South Africa.

“Nanomaterials are so tiny, you need high-powered equipment to see their composition, the surface of this material, and whether they have any pores to absorb the drug or not.”

Nyokong says she is proud to have established a state-of-the-art facility for nanotechnology “in the middle of nowhere”: Makhanda is about 750 kilometres from South Africa’s legislative capital, Cape Town, and 975 km by road from its largest city, Johannesburg.

Nyokong battles to find adequate funding. African nations largely fail to allocate adequate resources for scientific research, she argues in a paper published in March, and adds that funding challenges are compounded by system failures in payments of grants.

Nyokong works with up to 40 postgraduate students and postdoctoral researchers from across Africa. One of her collaborators, Bokolombe Pitchou Ngoy, now a professor at the University of Kinshasa in the Democratic Republic of the Congo, says Nyokong likes to promote the work of young scientists, particularly women.

Another former colleague, Edith Amuhaya, now an assistant professor in chemistry at the United States International University-Africa in Nairobi, Kenya, was a postdoctoral researcher at the institute, where she collaborated with Nyokong. She describes her former colleague as “hands-on”, despite managing a vast lab, with many students.

The institute’s research builds on work that Nyokong has been doing since she was first awarded two lasers by the National Laser Centre. Given mere hours in 2003 to write an application for the lasers, today those lasers have been updated and replaced many times over.

“It changed the course of my research,” she says. “I could not do the research on exploring my molecules for the possibility of use in photodynamic therapy without the lasers.”

Now research facilities across South Africa send materials to the institute for analysis, and its own research is forging new paths.

Research is now under way with researchers in Canada and Kenya to explore the use of photodynamic therapy to treat bacterial, fungal and viral infections.

Nyokong says she remains frustrated that industry take-up in South Africa of novel scientific research continues to be slow. Her team has worked on developing a film or screen to protect pilots’ eyes from exposure to laser beams while landing, but moving the project forward had been difficult.

“I want to work with someone to push this into mass production,” she says. “I need fresh ideas, because I’m training fresh minds.” — by Sian Powell 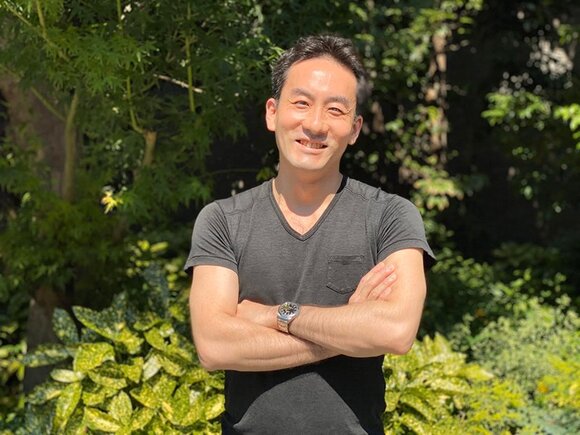 Seiji Takeda’s team at IBM Research in Tokyo has added a novel twist to the multitude of free things to do online. Its virtual lab web app, launched in March, lets users design molecules with the characteristics they want from a built-in data set using artificial intelligence (AI).

“It can motivate many people, including students interested in AI or chemistry, who don’t yet have that knowledge,” says the research scientist.

As a test, using a version of the IBM Molecule Generation Experience (MolGX) system aimed at chemistry professionals and materials-manufacturing industries, Takeda’s team and colleagues in Zurich and the company’s Almaden lab in San Jose, California, developed a new photoacid generator (PAG) as a non-toxic alternative to PAGs currently used in semiconductors.

The system has been used by a company in Japan to create new sugar and dye molecules with specified properties, in less than 10% of the time that it would take chemists.

Takeda is passionate about the power of open innovation to accelerate scientific discovery. “I hope this can be the start of collaborative open innovation in this materials informatics technology.”

The system for molecule generation is the culmination of seven years of research that marked a big switch in focus for the scientist, whose PhD research at Keio University, Tokyo, was in silicon photonics.

That work, on the fabrication of micro-sized lasers for integrated circuits, using light instead of conventional physical metal wires to improve data transfer in and between microchips, continued into a postdoc year at the École Centrale Lyon, France, and a further year as an untenured assistant professor back at Keio.

IBM is the leading corporate institution by far for materials science in the Nature Index, with a Share of 134.52 in the period 2015–20. Takeda joined IBM Research, the company’s R&D division, in 2012 because it ticked three important career aspirations: continued research in silicon photonics, an international working environment, and a chance to learn about science-driven business.

But when IBM discontinued chip manufacturing in 2014 following a $US1.5-billion deal with GlobalFoundries, a US semiconductor manufacturer, his group looked for a new direction.

At that time, materials science was at a threshold, explains Takeda. It was the dawn of deep neural networks, a form of AI that replicates the workings of the human brain by having machines analyse data on multiple levels using a set of algorithms.

“So we thought we could accelerate finding new materials by combining IBM’s high-performance computing with an analytic approach,” Takeda recalls.

Their platform is one of four components of what IBM calls its accelerated discovery strategy. For the PAG molecule, the company’s cloud-based research engine, Deep Search, extracted information about known PAGs from sources such as scientific papers and patents, augmenting it with simulated data to fill knowledge gaps about the precise properties of each chemical structure.

MolGX, the technology developed by Takeda’s team, then analysed the resulting data library to learn the relationships between molecular structures and their properties. It generated novel molecule candidates to fit specified target values across desired characteristics, such as low toxicity, light absorption, biodegradability and water solubility. The 7,000+ candidates generated by the model were vetted, with a few selected to be experimentally synthesized in an automated lab in Zurich to identify the best one.

“We confirmed that we can accelerate the design speed process,” says Takeda. It normally takes humans at least ten years to produce a new molecule, but the system did it in ten months, he adds.

The work has been described in conference proceedings, and two papers are to be submitted to a journal. The next phase is to replicate the method at scale and for other materials, for example, drugs or polymer membranes.

Although MolGX’s parameters can be set to avoid unsafe molecule traits, Takeda says the use of powerful AI technologies needs to be regulated. — by Catherine Armitage

These selected areas of research in materials science are the focus of an increasing number of articles in the 82 journals tracked by the Nature Index and Dimensions, Digital Science’s comprehensive database of publications, grants and clinical trials.

To determine the publication trend for each topic, a keyword search of titles and abstracts was performed. The proportion of articles related to the topic is shown as a percentage of the topic total for the period 2015–20. Topic article totals in 2015 and 2020 are also shown (in bold). 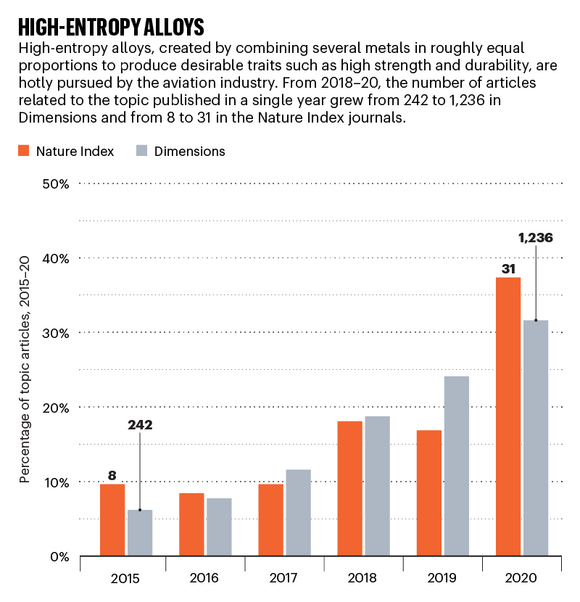 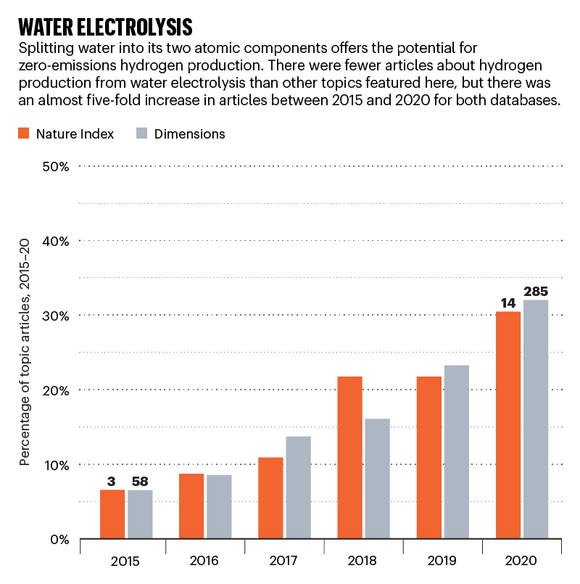 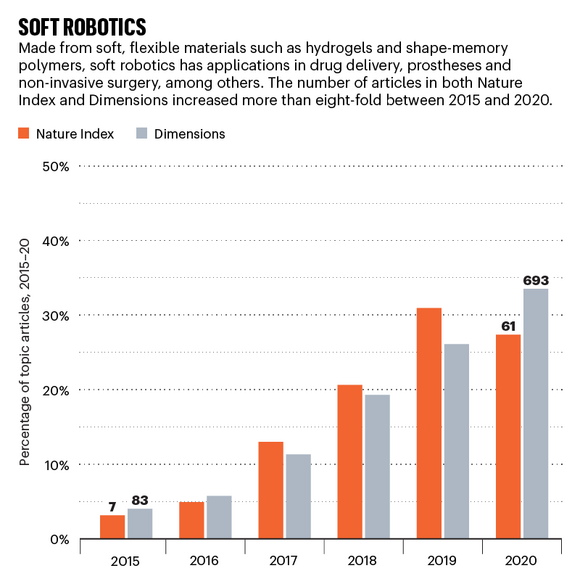 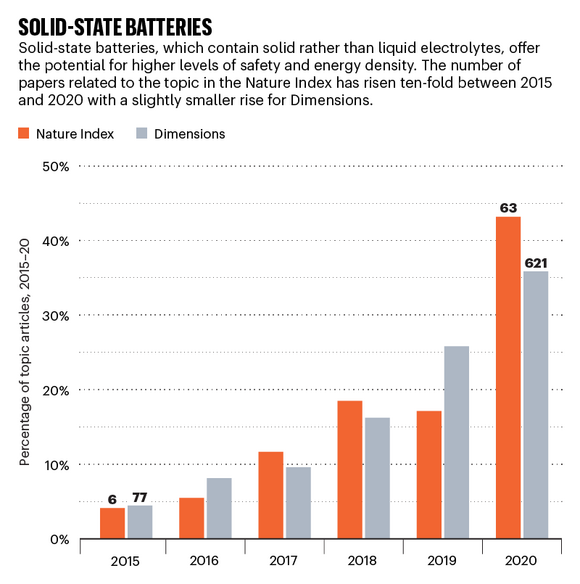 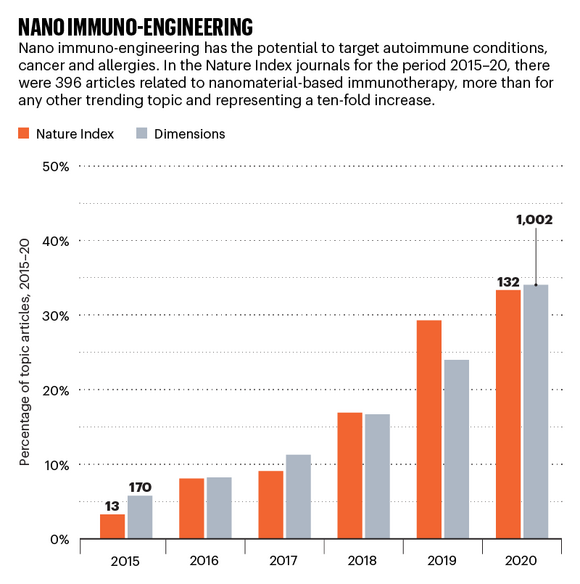