With the most to lose from looming federal funding cuts, California's researchers take a stand. 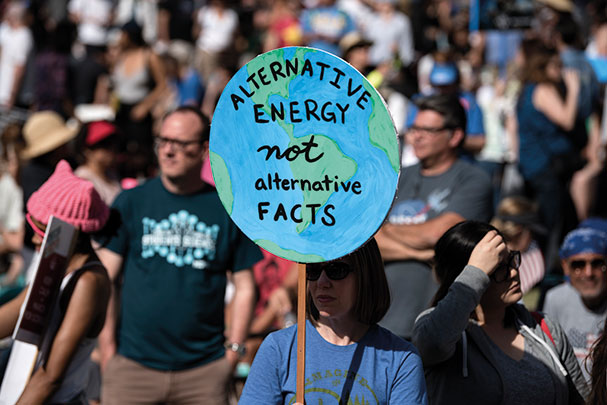 The March for Science in Los Angeles on Earth Day in April was in protest at proposed federal cuts to research funding.

In December 2016, at a meeting of the American Geophysical Union, the governor of California, Jerry Brown, declared that if the new Trump administration stopped monitoring the Earth’s climate with federal satellites, the Golden State would “launch its own damn satellites.”

Brown’s response followed earlier comments from a senior advisor to then president-elect Donald Trump proposing the elimination of funding for NASA’s Earth science division. It was the first of many rumours, culminating in deep reductions to federal science spending in the president’s proposed budget for 2018. The announcements have coincided with moves to restrict immigration, including a sweeping review of the visa programme used by research institutions to employ foreign scientists.

“We’ve got scientists, we’ve got lawyers, and we’re ready to fight,” said Brown to resounding applause from the crowd of climate scientists. But scientists in California are doing much more than cheering and clapping. Like Brown, they are using their political voice to challenge what they feel has been a gradual erosion of evidence-based policy-making.

“From climate change to food scarcity to income inequality, we need people in office who can think creatively and use evidence to make decisions,” says Jess Phoenix, a geologist who studies active and extinct volcanoes across four continents. In April, she announced her decision to run for Congress to represent her home district north of Los Angeles. “We need scientists to take a stand,” she says.

California, the most populous state in the US, has long been a science stronghold. With a weighted fractional count (WFC) of around 3,000, the research output of institutions in California in the Nature Index is nearly double that of its closest competitor, Massachusetts. For every 1,000 scientists and engineers working in the state in 2014, the United States Patent and Trademark Office granted it 45 patents — the highest in the country.

Part of the state’s research dominance can be explained by the large number of life, physical and social scientists employed in California — almost three times as many as in Massachusetts. In 2016, California received 15% of the total US allocation for the National Institutes of Health (NIH) and National Science Foundation (NSF), which was the largest share for any state, amounting to US$4.6 billion.

But from its position at the pinnacle of research, California stands to lose more than any other state from the cuts to science funding proposed by the Trump administration.

California’s losses would be likely to have far-reaching implications for the research output of the wider scientific community, given that many scientists in the state collaborate with peers across the country, and the world. In 2016, institutions in California formed more than 8,400 partnerships with counterparts in other states to co-author papers included in the index — the highest in the country. California’s institutions also formed the most partnerships with institutions outside the US.

Of course, a budget blueprint is just a president’s wish list and an actual budget has to pass through Congress, which has largely rejected slashing funding for scientific research. The budget reconciliation for 2017 added money to federal science agencies.

There is much trepidation among scientists about what cuts will pass Congress. “We are in a period of significant uncertainty,” says Randolph Hall, vice president of research at the University of Southern California (USC) in Los Angeles.

If federal funding is cut, California researchers will be looking for more money from the state’s budget, foundations and industry. Corporate funding currently makes up about 5% of research money, and private foundations 5–10%. State funding ranges from 2% or less at private institutions like USC, up to 11% at the public University of California system.

“While we might hope for these funds to rise in the future, it won’t ever come close to the amount from federal funding agencies,” says Hall, who is also the incoming president of the University Industry Demonstration Partnership, an organization that enables interactions between industry and academia.

Research also requires a reliable supply of talented people. Universities are concerned that reviews of visa policies, such as the 90-day ban on travellers from six Muslim-majority nations, and the more recent restrictions on visitors from a revised list of seven countries, could affect their ability to attract and retain the world's best researchers.

When Trump’s travel ban first went into effect in January 2017, Giovanni Peri, an economist at the University of California, Davis, was considering a candidate from Iran, one of the countries on the banned list, for a professor position. The selection panel decided that a different candidate was better qualified, but the administration’s announcement raised many concerns about whether the suspension on travel barred them from hiring an Iranian.

Reforms to the H-1B visa for highly skilled foreign workers could also hinder university recruitment. Universities in California employed more than 3,000 H-1B visa workers in 2015, according to the Office of Foreign Labor Certification. H-1B visas are becoming even more important for universities because fewer US citizens and permanent residents are pursuing advanced degrees in science. In 2014, 25% of the students enrolled in graduate programmes in the US were temporary residents, compared to 21% in 2000. “Universities would be impoverished and the ability to hire scientists would be reduced if the programme changed,” says Peri. In an analysis of US metro areas between 1990 and 2010, he found a 1% increase in the number of foreigners filling scientific and technical positions increased the average income of college educated native workers by 5–6% in that area.

The H-1B visa programme does not appear to be at immediate risk. But processing times have lengthened since the Department of Homeland Security suspended fast-track processing of H1-B applications in April 2017.

The current political climate has inspired some Californian researchers to look beyond the lab. Following the 2016 election, Phoenix found herself drawn into politics. She was dismayed to learn that her congressional representative, a member of the House Science Committee, does not believe that the federal government should regulate greenhouse gas emissions. 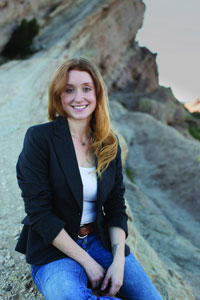 In April 2017, she decided to challenge for the seat in the upcoming 2018 midterm elections. Days later, she spoke at a March for Science rally in Los Angeles defending scientific research and informed decision-making. “I’m 35. No-one else is going to get involved politically for me,” says Phoenix, who runs an educational non-profit called Blueprint Earth and is a fellow at New York-based professional science society, The Explorers Club.

Kevork Abazajian, a physicist studying the origins of the Universe at the University of California, Irvine, is also considering a run for city council — a local office. He hopes to get the town of Irvine to take more action on climate change, for one thing. “After the November election, scientists have been shocked by the degree of incompetence at almost every level of elected office,” he says. “There is a history of scientists going into elected office in other countries, and that’s what we need more of.”

Abazajian is also the California coordinator for 314 Action, a non-profit group that supports science-savvy candidates and policies. Since January, the group (whose name comes from the value of the mathematical constant π) has organized two training sessions in Washington DC and California for scientists interested in running for office. Training included fundraising and crafting a message that sticks with voters. “You have to be a good messenger,” says Abazajian.

314 Action has also supported stem cell researcher, Hans Keirstead, in California, along with volcanologist Phoenix, in their bids for Congress in 2018. Adding more scientists would shake up the decision-making process: currently only one of the 535 representatives and senators is a practising scientist with a doctoral degree — physicist, Bill Foster, of Illinois. “When California leads, the world follows,” says Phoenix. “Now, more than ever, we are called to bring truly representative democracy to the fore.”