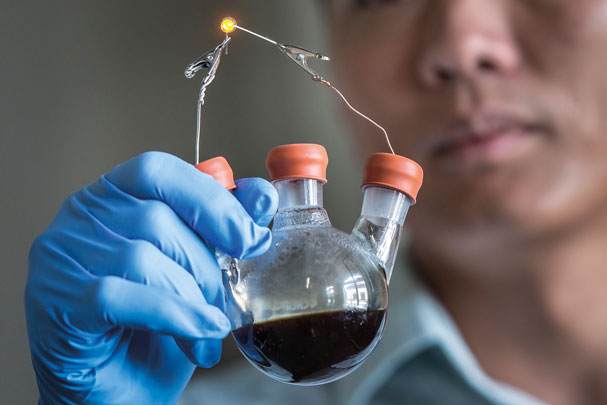 Industry funding supports more applied research, such as this lithium-polysulfide flow battery, which could serve as a model for low-cost, long-lasting energy storage.

Industry–academia collaborations have been a small, yet enduring presence in the knowledge production system. According to the US National Science Foundation (NSF), industry has accounted for between 3% and 9% of academic research funding every year, going back to 1972. In 2014, the latest year available, it was US$3.6 billion, or 5.7% of total funding, on par with investment from non-profits, and state and local government.

Vakili and his colleagues, Florenta Teodoridis, at the University of Southern California, and Michaël Bikard, at the London Business School, were not entirely convinced by the negative results. The productivity differences observed by Hottenrott and other studies, says Bikard, could simply be due to how worthy of publishing a research project is. “Every piece of science is different, so it’s very difficult to know what causes what,” Bikard says.

The increase in publishing and the decrease in patenting by academics who collaborate with industry could be a result of an efficient division of labour, Vakili suggests. Many scientists who don’t have industry collaborations are still interested in commercializing discoveries. It could be, Vakili says, that those scientists devote some of their time to turning a discovery into a product and have less time to write papers. Meanwhile, in an academic–industry collaboration, the industry side could be focussed on the commercialization work, leaving the academics free to publish more. While the twin study looked at collaborations where industry was actively involved in research, some collaborations are just financial, where firms provide grants to sponsor academics' work.

In a separate analysis of papers in that dataset, Bikard says, the team found neither a positive nor negative effect on publishing from sponsorship. “We’re not saying that bringing money is not important,” he says, but industry sponsorship did not provide an edge, maybe because academics in the sample get enough funding from other sources.

Academic publications were also more likely to grab public attention if they included a corporate co-author, according to an analysis of the high-quality papers tracked by the index. The online discussion around a publication authored by an academic researcher, measured by its altmetric attention score, more than doubled when a corporate researcher was involved. Industry can provide other benefits to academics besides financial support, says Anthony Boccanfuso, head of the University-Industry Demonstration Partnership, a non-profit organization originally sponsored by the US National Academy of Sciences to help academia and business collaborate.