How to manage a multi-author megapaper

Large teams can produce more impactful work, but organizing a paper produced by many can be a major challenge. 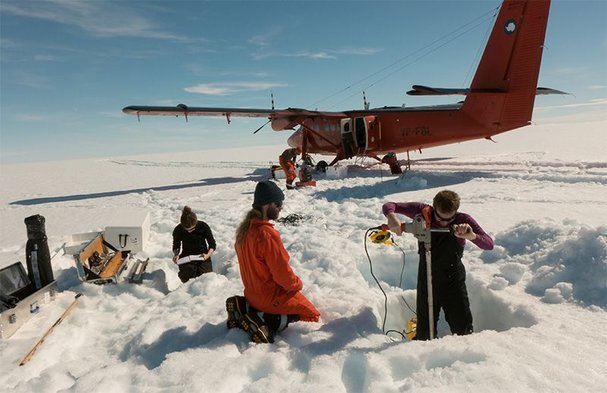 Andrew Shepherd and his team collect cores from the George VI Ice Shelf, Antarctica, in their work estimating ice loss from polar caps.

For a frog, exposure to the amphibian chytrid fungus (Batrachochytrium dendrobatidis) is very bad news indeed. The fungus thrives in the same wet, hot conditions that frogs favour and it grows on amphibian skin. Frogs breathe through their skin, which is used by almost all species for electrolyte exchange. Chytrid prevents electrolytes from entering the animal’s body, which eventually causes a heart attack.

Chytrid fungus species are responsible for significant amphibian population reductions in Central and North America, Europe and Australia. Although declines were at their worst in the 1980s, one 2004 study suggested that at least 43% of amphibian species are dwindling worldwide. New Guinea, home to 6% of the world’s frog species, is one place chytrid is yet to invade.

Deborah Bower, an ecologist at the University of New England in Armidale, Australia, is investigating proactive protection strategies for New Guinea, including increased quarantine measures and an island-wide surveillance programme.

In 2015, she collaborated with 29 other scientists on these and other recommendations. The results were published in June 2019 in Frontiers in Ecology and the Environment. Such collaboration is unusual in Bower’s field, where single-author papers are common.

“When the fungus gets to New Guinea, more than 100 frog species could go extinct,” she says. “The island has a complex political system; it’s half Papua New Guinea and half Indonesia. There’s not much local experience in dealing with the disease. We brought in scientists from the US and Australia who had experience with chytrid, plus experts from a policy background who have worked with governments on large-scale changes.”

Bower hopes the paper will have more impact than something she could have produced alone. “We had authors from five different countries, which gave us access to more skills. One of the co-authors did climatic modelling on the fungus, for example.”

Another bonus, adds Bower, is a more refined document. “There are more eyes going over it,” she says.

At the same time, this presented a challenge. Organizing schedules was difficult, almost as much as fielding multiple pages of feedback.

“Getting comments from 29 people is overwhelming. I had maybe 20 different documents to go through. A colleague travelled 460 kilometres from Sydney and we sat down with two computers, one with tracked changes and one with comments, to manage it.”

Another struggle was editorial policies and style guides. In 2017, Science accepted a ‘perspective’ article from Bower and four co-authors to outline work in progress.

“I had to ditch 25 authors,” she says, noting that the journal sets a limit of five authors for its perspective articles.

Scientists are co-authoring more than ever before. In 2016, The Economist reviewed more than 34 million research papers published between 1996 and 2015, and found that the average author numbers grew from 3.2 to 4.4 per paper.

A 2018 Nature Index analysis found that the field of high-energy physics is largely responsible for the rise of papers authored by more than 1,000 individual scientists in recent years. A 2014 collaboration estimating the size of the Higgs boson, for example, listed a record-breaking 5,154 authors.

Papers in physics and astronomy, genetics, oncology and immunology, were also identified by Nature Index to be the most likely to have long author lists.

CERN’s particle-collision experiment, ATLAS, which is designed to test the standard model of physics, makes use of one of two general-purpose detectors at the Large Hadron Collider in Switzerland, and regularly produces physics megapapers.

Karl Jakobs, a physicist and ATLAS collaboration spokesperson, is part of a publishing group that makes up the 3,000-strong team. “In terms of who actually writes the paper, we assign two or three editors, called an editorial team,” says Jakobs. “They discuss, present an outline and write the paper, with input from the scientists who provided the data.”

Papers are then subject to a series of internal peer reviews and the editorial team takes in contributor feedback, followed by an external institutional review from a collaborating physics department. The extent of this back-and-forth editing before a paper is even submitted to a journal might seem intimidating for some, but “it’s not a nightmare”, says Jakobs, because the collaboration and review process is well defined and organized in a way that makes sense to the participants.

The ATLAS collaboration published more than 100 papers last year, but similar efforts can be a struggle in other fields. Andrew Shepherd, an Earth observation scientist at the University of Leeds, UK, leads a publishing consortium of 96 researchers who estimate ice loss from polar ice caps.

“In 2010, when we started working on this, there were probably around 50 individual estimates in the literature for how much ice was being lost,” Shepherd says. “The project was established to shed light on why there were such large differences between individual estimates, and then to produce a single estimate for the community.

“The main challenge is some very large characters in the project who have very different opinions as to whether ice is being lost or gained, for instance,” he says.

Shepherd explains that organizing the input of almost 100 experts on a topic of great interest to the press and public can be difficult.

“It’s very intensive on my part. I calculated that, in the first assessment, I sent 5,000 e-mails on the project. We’ve done three assessments now. I haven’t counted those e-mails because it’s quite depressing, but it’s probably about the same,” he says.

The ice sheet mass balance inter-comparison exercise (IMBIE), which has produced high-profile papers in Science (2012) and Nature (2018), “ate into my summer holidays”, Shepherd admits. “I’ve spent probably about two hours every morning of my vacation this year dealing with the minutiae of publishing this most recent paper. It demands a lot of time.”

Shepherd says this time investment has its rewards. The group’s first publication estimated ice loss of around 4,000 gigatonnes from the Antarctic and Greenland ice sheets since 1992.

The paper has clocked more than 800 citations since 2012, which is “very, very high for the climate sciences”, Shepherd says. It also has a high Altmetrics score, which measures interest from social media and online news audiences.

“We have a broader impact,” says Shepherd. “The US Environmental Protection Agency has been using our data for the past four or five years as a climate indicator, for example. It’s a very rewarding project."