Peace and common membership of the European Union have allowed scientists in the Republic of Ireland and Northern Ireland to build a unique, cross-border research system. 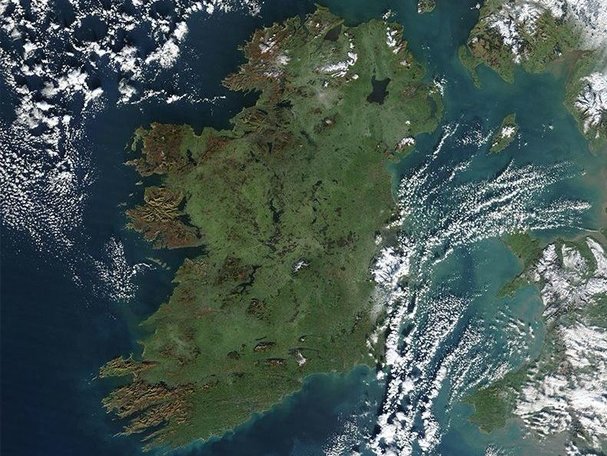 The Irish border has been a major sticking point in Brexit negotiations.

Separated by a two-hour drive through Ireland’s verdant countryside lie two institutions and an international border that is all but invisible.

One is Queen’s University Belfast — the premier research university in Northern Ireland, a region of the United Kingdom, which is scheduled to leave the European Union as part of Brexit on 29 March. Trinity College Dublin, its counterpart in the Republic of Ireland — a member and ardent supporter of the EU — will stay.

The drive wasn’t always so leisurely: for three decades until the 1990s, Northern Ireland endured a complex and bloody conflict known euphemistically as the ‘the Troubles’. British army checkpoints and watchtowers punctuated the frontier — imagery never far from the minds of people both sides of the divide.

But for the past two decades, the island of Ireland has benefited from peace and economic growth in the wake of the 1998 Good Friday Agreement, which ended the conflict and made the border disappear. Science, too, has profited and the island’s universities and institutes have cultivated a unique, cross-border research ecosystem in which north–south collaboration is common. But Brexit now risks upsetting that community, say researchers, and could create a divide on the island once again.

That’s because the Irish boundary is the United Kingdom’s only land border with the EU. Goods and services currently flow freely because both nations are members of the EU — but the split risks reintroducing checks at the border.

Largely ignored during the Brexit referendum campaign in 2016, the Irish-border issue has become a major sticking point in UK–EU Brexit negotiations. A renewed ‘hard’ border is unpalatable to almost everyone on the island, including scientists, and would violate the terms and spirit of the peace agreement. And while both the EU and United Kingdom have pledged to prevent such a border, a practical solution to the conundrum is yet to be agreed.

A hard border in Ireland would be a “catastrophe” in terms of cross-border collaborations on the island, and, worse, it could raise tensions, says Catherine Godson, a molecular biologist at University College Dublin (UCD).

“The worst Brexit outcome would be a resumption of violence,” agrees Tom Molloy, director of public affairs at Trinity College Dublin.

The Good Friday Agreement has fostered a de facto all-island education and research community — and cross-border collaboration, in turn, has helped with community integration and the peace process, says Jane Ohlmeyer, a historian at Trinity College Dublin and co-chair of the Royal Irish Academy’s cross-border Brexit taskforce, which is assessing the impacts of Brexit on research and higher education.

Seamless sharing and exchange of personnel, equipment, reagents and data have all facilitated collaboration, says Godson. Any border restrictions, or differences in regulations, would greatly burden partnerships, she says. “It would just make things so difficult,” she says. “I dread to even think about it.”

Many cutting-edge collaborations result from a partnership with the United States, developed as part of the peace process to foster research excellence. Launched in 2006, the US-Ireland Research and Development Partnership funds teams made up of scientists from the north, the south and the United States to compete for awards from the US National Institutes of Health and National Science Foundation; it has so far given out 49 awards worth €73 million (US$83 million).

Godson, who has won three awards, says that teaming up with researchers at Queen’s University Belfast (QUB) gave her the all-island critical mass needed to be credible partners with their US colleagues at the Broad Institute of MIT and Harvard in Cambridge, Massachusetts. If Ireland’s research system is weakened, such partnerships might be more difficult to forge.

“The US-Ireland research and peace initiative has tremendous value for research, but its value goes beyond research,” says Paul Hurley, who heads nanoelectronics materials and devices research at University College Cork in the republic, and is a recipient of two awards for projects involving QUB and the University of Texas at Dallas. It would be a great shame were it to be harmed by Brexit, he says.

Hurley, from Cork in southwestern Ireland, says he had never set foot in Northern Ireland until he went to Belfast in 2008 to work on a joint US–Ireland grant proposal.

Worries to the north

Northern Ireland — which in the 2016 referendum voted 56% in favour of remaining in the EU — is particularly vulnerable to Brexit, says Gerry McKenna, a former vice-chancellor and president of the Ulster University, a multi-campus institute in Northern Ireland, and the other co-chair of the Brexit taskforce.

Northern Irish researchers are already geographically isolated from the rest of the United Kingdom, and politically from the republic; Brexit would risk further isolation, he says.

Funding from the EU and elsewhere has helped to build up research capacity in the north since the end of the Troubles — which has made it more competitive and attractive for funding and researchers. But this recovery is still fragile and would be set back by Brexit, says McKenna.

Mark Lawler, a cancer researcher at QUB, says that Brexit risks damaging the university’s world-leading cancer research — one of Northern Ireland’s strongest areas of science. It threatens QUB’s participation in major European cancer research networks, often involving scientists in the republic and UK researchers. Any restrictions to free movement of EU citizens after Brexit would mean that EU researchers might not be able to freely come to live and work in the north, or no longer even wish to come, adds Lawler, who moved to QUB from Trinity College Dublin in 2013.

Brexit could also scupper collaborations involving EU money — more than half of Northern Ireland’s projects funded by the EU’s Horizon 2020 research programme involve research partners in the republic. The split could harm these ventures because it’s not clear how the United Kingdom will participate in EU research-funding programmes.

“They have a lot to lose,” says Mark Ferguson, director-general of Science Foundation Ireland (SFI) and the republic’s chief scientific adviser.

Scientists in the republic have similar fears about EU programmes, because the United Kingdom has historically been Ireland’s largest research collaborator.

Irish research institutions want to preserve and reinforce their collaborations with UK researchers because of Brexit. For example, SFI is launching joint 5-year research professorships with the United Kingdom, each worth €10 million to the researcher.

Ireland would have to increase its research spending to compensate for any loss of EU support for joint projects with the United Kingdom, says Ferguson. But it would be difficult for the government to make financial reassurances when Brexit risks hitting the Irish economy badly, he adds (the United Kingdom is its biggest trade partner). Poor economic growth would affect public spending, including funds for science, says Ferguson.

The threat to Ireland’s economy and research could not come at a worse moment, says Ferguson. Ireland has just begun recovering from the 2008 financial crisis and years of austerity — which reversed almost a decade of rising research spending, he notes.

There might yet be a silver lining for the republic. The situation could make Ireland more attractive to scientists and companies as an alternative research destination to the United Kingdom, argues Ferguson — Ireland would be the only English-speaking country with full access to the EU single market and EU research programmes.

The SFI sees opportunities to recruit top talent in the process, says Ferguson. “It’s not a parasitic approach. We are not encouraging people to leave; we are saying that if you are leaving the UK, consider Ireland as a destination,” he says.

Molloy and other officials in Ireland say that they are already noticing an uptick in the number of UK researchers considering a move to Ireland since the Brexit referendum.

But Godson thinks that any advantages for Irish research will be far outweighed by the negatives. “Whatever short-term gains there may be, our long-term interests as academics, scientists and researchers are not well served by an EU without the UK,” she says.