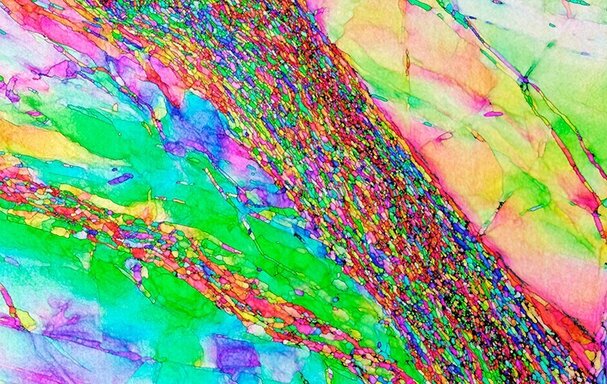 Nanocrystalline microstructures, similar to those shown here in an aluminium alloy, can impart desired properties such as enhanced strength and hardness in high-entropy alloys.

Aircraft engines work better at higher temperatures. As they get hotter, they burn fuel more efficiently, which means they can fly farther on the same volume of propellant. But they can’t get too hot — above 1,150 °C, the nickel superalloy in their turbines starts to soften and bend, which could quickly lead to engine failure.

A solution to this problem might come from a burgeoning field of metallurgy: high-entropy alloys.

Unlike conventional alloys, which usually feature one main metal mixed with small quantities of others, high-entropy alloys typically use five metals mixed in roughly equal proportions. The resulting crystal structures can endow the alloy with a combination of useful properties, such as strength, toughness and resistance to corrosion.

One of the biggest challenges in structural materials is creating substances that can maintain their integrity at high temperatures, such as those found in aerospace applications, says Robert Ritchie, a materials scientist at the University of California, Berkeley, who studies the mechanical behaviour of such alloys at the US Department of Energy’s Lawrence Berkeley National Laboratory.

Jet engines convert heat energy from burning fuel into thrust, and the greater the temperature difference between the heat source and the cool air outside the engine, the more thrust the engines can get from a given amount of fuel.

But to keep the engine parts from being damaged by high temperatures, the engines also use some of the fuel, which could otherwise be devoted to flying the plane, to compress air so that it can be used to cool the parts, thus decreasing efficiency.

Engines could run several hundred degrees hotter than existing metals allow, Ritchie says, if only the materials were available. “We’d kill just to get a five-degree increase in temperature in the engine.”

It is possible to make metals that can withstand higher temperatures by using alloys with very strong atomic bonds in the crystal. The trouble is, as materials get stronger that way, they become less ductile, making them brittle.

So if you put them in an engine, the first pigeon you ingested would shatter the engine,” Ritchie says. High-entropy alloys, however, show promise in providing both high strength and high ductility.

The term high-entropy alloys arises from the high level of internal disorder that occurs when the principal elements are mixed. Typically, when several metals are combined, enthalpy drives them towards forming intermetallic compounds that are hard and brittle.

By increasing the relative proportions of the elements and introducing more internal entropy, the formation of such compounds becomes energetically much less favourable, giving the resultant alloys improved physical properties without the drawbacks of conventional mixtures.

Researchers are now beginning to question the entropy explanation. The alloys can still form intermetallics, the metals don’t have to be in precisely equal proportions to get interesting properties, and entropy doesn’t seem to be the most important factor, Ritchie says.

And they don’t even have to contain exactly five elements. The materials might be better called multicomponent alloys, or multi-principal-element alloys, but the high-entropy name has stuck.

Perhaps 50 metals in the periodic table could provide useful properties, leading to more than 2 million possible combinations of 5 elements in equal shares, a vast number of potential new materials.

But because an alloy can have more or fewer elements, and the concentrations can vary, the number of possibilities becomes practically infinite. Those numbers shook up the rather mature field of metallurgy.

“You suddenly have a lot of uncharted territory,” says Dierk Raabe, a computational materials scientist at the Max Planck Institute for Iron Research in Dusseldorf, Germany. “So many possible compositional and maybe also property variations are suddenly in reach.”

The high-entropy idea is beginning to be applied in materials that are not metal alloys, such as oxides and ceramics, says Ritchie. 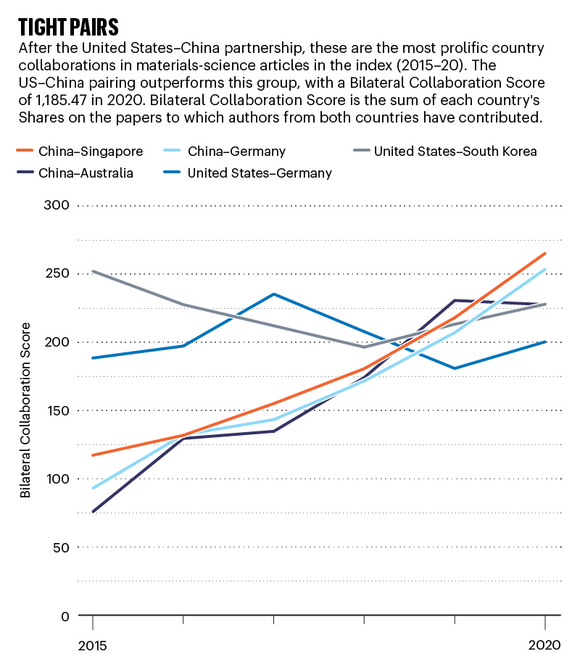 “It has massive potential for wonderful new materials to contribute to human development in many ways,” Cantor says.

One of the alloys Cantor developed was equal parts chromium, manganese, iron, cobalt and nickel. Ritchie found that versions of the Cantor alloy get tougher at ultracold temperatures, such as those of liquid nitrogen, the point at which most other materials get more brittle. That could be important for anything containing ultracold substances, such as rockets that use liquid oxygen.

High-entropy alloys could have other useful properties. Cem Tasan, a metallurgist at the Massachusetts Institute of Technology in Cambridge, is particularly interested in materials that are resistant to hydrogen embrittlement. Because they are so small, hydrogen atoms can easily penetrate many ductile materials and cause them to become more fragile.

“Some of the micro-structural mechanisms we see in [high-entropy] alloys can potentially be quite beneficial for hydrogen embrittlement resistance,” Tasan says.

Researchers might also be able to find new materials with properties such as magnetism, or superior resistance to corrosion. One group at Tokyo Metropolitan University recently created an alloy of cobalt, nickel, copper, rhodium, iridium and zirconium that showed superconductivity at 8 kelvin, extremely cold, but still a higher temperature than is seen in many other superconducting materials.

Discovering high-entropy alloys remains a challenge. Scientists can calculate thermodynamic models that predict some useful material compositions, but those models can miss subtleties. Ritchie points out that such an approach would probably not have uncovered steel, which requires not just mixing iron and carbon, but also applying the right combination of heat and pressure.

Another discovery approach is rapid alloy prototyping, in which a slab of material is cast with the concentration of elements varying from one end to the other, then tests are performed on different samples throughout. That provides limited samples, though, and can become expensive.

Researchers can also start with knowledge of how certain crystal structures give rise to particular properties, and try tweaking those structures to improve those properties.

The field is growing rapidly, and researchers expect that growth to continue. “Literally hundreds of papers are published monthly,” Tasan says. “There are so many engineering applications where we need new materials.”