These institutions have made great strides over the past three years in their production of high-quality research. 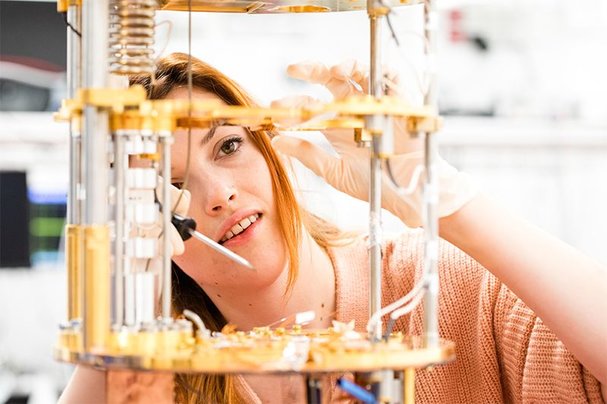 Matilda Peruzzo, a PhD student in Johannes Fink's group at the Institute of Science and Technology Austria. Her experiments seek to characterize new types of superconducting qubits.

Although many of the top institutions have benefited from centuries of steady scientific activity, these younger contenders are reaching for the sky. Established as universities after 1988, they have made significant progress in contributions to 82 high-quality journals over the past three years. We profile six of the leading young institutions.

India’s Department of Atomic Energy (DAE) created Homi Bhabha National Institute (HBNI) in 2005 to advance the country’s capabilities in nuclear science and engineering. Named after Homi Jehangir Bhabha, considered the father of India’s nuclear programme, the university was formed from 10 DAE institutions focussing on nuclear physics and mathematics. Among them is the Variable Energy Cyclotron Centre in Kolkata, which houses India’s first major accelerator for peering inside the atomic nucleus. In 2016, an 11th member, the National Institute of Science Education and Research in Bhubhaneswar, became part of the university.

HBNI has increased its contribution to papers in the index by 68.2% since 2015, and is the top-ranked rising star in India in the physical sciences. Papers cover theoretical investigations into subatomic particles, from neutrinos to mesons. Researchers at the institution have also contributed to work on harnessing the Sun’s heat to halve the fossil-fuel consumption of existing coal-fired power plants, and the use of molecular assemblies to prevent amyloid build-up in the body, a hallmark of many diseases including Parkinson’s. HBNI received 15 million Indian rupees (US$212,000) in grants and subsidies in 2016–2017, and has 1,042 research faculty. — by Smriti Mallapaty

Southern University of Science and Technology

Southern University of Science and Technology (SUSTech) is positioned for success in Shenzhen, a city often referred to as China’s Silicon Valley. Between 2015 and 2017, funding at SUSTech increased from 153 to 600 million yuan (US$87.8 million), largely from the Shenzhen government and National Natural Science Foundation of China. With the city’s support, SUSTech is also building the country’s most advanced cryo-electron microscope laboratory for revealing the structure of biomolecules.

Shenzhen’s investments are yielding results. Since 2015, SUSTech has more than quadrupled its contribution to the Nature Index — making it the top rising star under 30, with strengths in chemistry, and rapid growth in the physical sciences. Among its top index contributors is Xumu Zhang, who has a chemical reaction named after him.

Some 90% of the university’s 300-strong faculty have overseas experience, with the majority of courses taught in English. SUSTech has enlisted 60 staff members through China’s national Thousand Talents Plan, which offers incentives to Chinese professors, trained abroad, to return to China.

The university also has policies that encourage high-quality work, such as a meritocratic appraisal system that makes it easy for researchers to identify promotion opportunities, and deters nepotism. — by Sarah O’Meara

Starting with two institutes in 2006 in Pune and Kolkata, there are now seven Indian Institutes of Science Education and Research (IISER), with two set up in 2015 in Berhampur and Tirupati, on the central-eastern coast.

The IISERs were established to bring high-quality science teaching and research under one roof. It was an unusual model for the country. University faculty, burdened with teaching loads, poor funding and limited infrastructure, did not engage in research, while the elite research institutes did not teach. “The IISERs have the right combination of both components,” says Soumitro Banerjee, a physicist at IISER, Kolkata.

The Indian government now recognizes several IISERs as Institutes of National Importance, a designation given to institutions that play a role in developing highly skilled individuals, which affords them additional funding.

Collectively, the institutes have increased their contribution to science tracked by the index by 24% since 2015.

The mandate to balance teaching with research has engaged undergraduates in research, some publishing results by completion of their master’s degree. The IISERs’ research budget was 6.3 billion Indian rupees (US$89 million) in 2016–2017. — by T. V. Padma

Institute of Science and Technology Austria

Located in Klosterneuberg, just outside Vienna, researchers at the Institute of Science and Technology Austria (IST Austria) are encouraged to explore their curiosities, far from the fixation on impact. Established by the federal government in 2009 to focus on basic research, “the institute values science for its own sake and not its potential to bring immediate benefit,” says biologist, Fyodor Kondrashov, who runs a research group that uses an array of tools — mathematical modelling, bioinformatics data, and experiments — to study evolution.

The graduate-only university, which is organised into research groups with no departments, encourages students to be collaborative and broadminded, says Kondrashov: students spend the first year rotating among groups to find the best fit for their interests.

Researchers have thrived in the intellectual environment, more than doubling their contribution to the Nature Index since 2015, with the life sciences accounting for two-thirds of this output. Among IST Austria’s most prolific teams are those determining how immune cells move and change shape, how plants adapt to changing environments, and how neuronal networks process information.

IST Austria supports 700 staff, and 142 PhD students. The Austrian government committed €290 million (US$336 million) for its first 10 years, with researchers securing an additional €100 million in third-party funds. — by Gemma Conroy

The university’s deep pockets for research and salaries have drawn foreign talent. Among them is chemical scientist, Yu Han, who moved to KAUST in 2009, and stands out in the index journals for his work on nanoporous materials used to purify water and clean fuel emissions. Some 95% of KAUST faculty are international, and more than three-quarters of papers co-authored at the university in the journals tracked by the index are with international partners. — by Gemma Conroy

The university encourages commercial partnerships, and has 11 start-ups developing technologies such as rehabilitation exercise devices, robots that work on building maintenance, and a fire-retardant insulation material.

With three other national institutes advancing science across the country, in Daejeon, Gwangju and Ulsan, DGIST president, Sang Hyuk Son, says the university stands out for its interdisciplinarity: roboticists team up with life scientists, while solar energy specialists work with materials scientists.

DGIST’s contribution to articles tracked by the index has doubled over the past three years to a fractional count of 13.99 in 2017. Chemistry accounts for more than half of its overall output. In 2017, for example, DGIST researchers developed a high-resolution imaging technique to analyse living biological samples without chemical pre-treatment, which could be applied in medical diagnosis and drug screening. — by Gemma Conroy