The research giant lags in its support of female leadership. 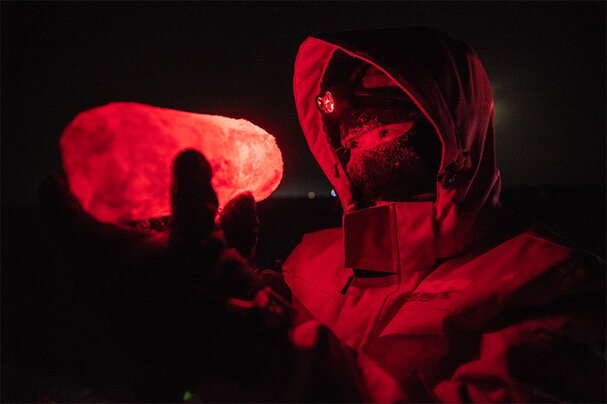 Allison Fong from the Alfred Wegener Institute in Germany uses red light to study an ice core extracted during the MOSAiC expedition.

It is striking how often researchers in Germany mention their appreciation for the chance to pursue blue-sky science.

This ability to undertake fundamental, curiosity-driven research without first needing to demonstrate potential applications is especially evident at the Max Planck Society, Germany’s flagship research organization and the country’s most prolific institution according to Share in the Nature Index, our key metric, which measures contributions to articles in 82 selected natural-sciences journals.

Lucy Aplin, a researcher who moved there from the University of Oxford, UK, to run a lab that investigates the social dynamics of wild populations of songbirds, says nowhere else has encouraged her as much to focus on the blue-sky aspects. Aplin is also a leader in one of Germany’s Clusters of Excellence.

The nation’s growing support for its start-up ecosystem is an important factor. Many start-ups are spun out of universities, such as Leibniz University Hannover, where geobotanist and soil-scientist, Simone Strey, conducted preliminary research before co-founding PEAT, the company behind one of the world’s largest crop management apps by number of users.

With the proportion of female start-up founders in Germany at just 15.7% in 2020, Strey joins Ida Tin, founder of Berlin-based start-up, Clue, among a growing number of female leaders in Germany’s innovation scene. But a similar lack of diversity in the academic sector, where women accounted for just 19.4% of senior academic staff in 2016, is a reminder that, despite its successes,

German science can still do better.