Some papers have a profound and obvious influence on future research and industry applications. Patents citing these life science papers indicate their bearing on developments which have widespread health implications. 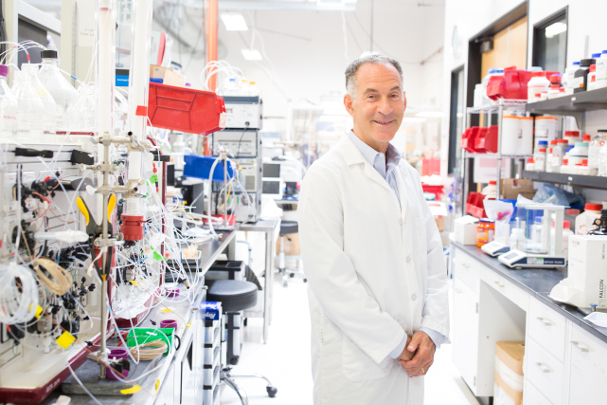 David Lipman, who co-authored the BLAST paper, which has been cited in at least 4,900 inventions according to patent documents in the Lens database.

Lists of the most highly cited academic articles garner considerable attention from the research community. But articles that are highly cited in patents don’t receive the same attention. This is surprising given the demand from governments that scientists demonstrate the societal or economic value of their research. Citations of articles in patents are a general indicator of the dynamic between science and technology, and can infer that a piece of research has influenced an invention. Here, the index profiles three life science articles that have been highly cited in patents. Each article has had profound impact on industry and, eventually, consumers. These papers were selected from the Lens platform, based on articles cited in patents. Each paper had been cited in more than 1,000 patent families by 2016. Patent families represent a single invention. Inventors often file patents in multiple countries, which is why the number of citing patents is larger than the number of patent families.

THE GOOGLE OF GENOMES

Basic Local Alignment Search Tool published in the Journal of Molecular Biology in 1990.

Inferring the function of a protein 40 years ago required finding a related protein with a known function. To determine the similarity between two proteins meant comparing their amino acid sequences using a time consuming algorithm.

In 1983, biologist David Lipman and colleague W. John Wilbur reported a faster method to identify the similarity between two unrelated sections of DNA or protein. A year later, a global team of scientists used the technique to show that amino acid sequences from a human growth factor closely resembled sequences from a cancer gene in a chicken virus. The paper marked significant progress in the basic understanding of cancer development and revealed the value of computational tools for making biological discoveries.

Lipman, then based at the National Institute of Arthritis, Diabetes, and Digestive and Kidney Diseases, says this unexpected discovery prompted him to find how to detect more distant relationships between proteins. In 1990, Lipman and colleagues Stephen Altschul and Warren Gish, along with collaborators Webb Miller, at Pennsylvania State University, and Eugene Myers at the University of Arizona, published details of a more advanced algorithm. The Basic Local Alignment Search Tool (BLAST) used pattern recognition software to perform faster sequence comparisons. It could calculate the statistical level of similarity between two sequences, says Lipman, who recently left the NCBI after 28 years as its director.

Within 10 years automated DNA sequencing machines had also gained a foothold and some 50,000 nucleotide sequences from plants and animals were stored in the NCBI-owned genetic sequence database known as Genbank. BLAST enabled researchers to search for, or compare, DNA sequences. Just five years after its release, BLAST was handling about 200,000 queries a week. These comparisons could yield several types of clues: what organism the sequence probably came from, its evolutionary origin, and potential function.

BLAST has since evolved into a family of free web-based bioinformatics search tools that are still widely used. Since 1990, the BLAST paper has been cited by at least 4,900 new inventions, according to patent documents in the Lens database. Chemical giant Dupont and several of its subsidiaries own the most patents that cite the paper.

The NCBI team have created a new programme within the BLAST toolkit that they hope to publish by September that will assist with finding small genetic variations in bacteria, which may be linked to traits such as antibiotic resistance.

Replacing the complementarity determining regions in a human antibody with those from a mouse published in Nature in 1986.

In 1986, Greg Winter and colleagues at the UK’s Medical Research Council (MRC) described in Nature a method for swapping pieces of a mouse antibody with those from a human to create a chimeric antibody. This was the second essential step in the development of antibody-based therapies for human disease, which represented more than 40% of total sales of biopharmaceutical products in 2016.

The first step occurred a decade earlier when Nobel prize winning researchers Georges Köhler and César Milstein developed mouse antibodies that recognize a single foreign molecule. While such monoclonal antibodies, had a wide range of applications in medical research and diagnostics, their use in medicine was limited. Mouse antibodies are different from human ones — even when they target and bind to the same part of a protein. “Antibodies that are generated in another species cause side-effects in humans,” says vaccinologist, Ursula Wiedermann, of the Medical University of Vienna. Indeed, the first US Food and Drug Administration (FDA) approved therapeutic antibody, CD3, is no longer used for this reason.

Winter’s method for creating chimeric antibodies meant they were less likely to be recognised as a foreign protein and destroyed by the human immune system. But, it was more than ten years after the Nature paper that chimeric therapeutic antibodies were approved for treating conditions such as rheumatoid arthritis and non-Hodgkin lymphoma. Georgina Clark, an immunologist at the ANZAC Research Institute in Sydney, Australia, says the delay was partly due to the difficulty and time taken to make antibodies. “It was reliant on other technologies such as cloning and sequencing that were only just beginning to take off,” she says.

In 1988 Winter and Milstein helped produce humanized antibodies, which are very similar to naturally produced human antibodies but still contain small sections of mouse antibody. This was the next logical step after the development of chimeric antibodies, says Clark.

Winter and others continued to advance methods for developing therapeutic antibodies, eventually producing fully human monoclonal antibodies using a technique called phage display. A number of papers on this work are also highly cited in patents. The first fully human monoclonal antibody, adalimumab, was launched in 2002 for treatment of rheumatoid arthritis and has become the bestselling drug of all time. About 70 antibodies have been approved by the FDA to treat conditions such as Crohn’s disease, cardiovascular disease and transplant rejection.

Wiedermann, who is also the chief scientific officer of Australian biotech company, Imugene, says much of the current interest in monoclonal antibodies comes from the rapid development of cancer immunotherapies. “We are in the middle of an exciting era,” she says. “A lot has changed in the last 15 years.” Major advances include multiple approaches to using antibodies for cancer treatment, such as antibodies that target the tumour itself, or those that target immune regulation.

The next iteration of immuno-oncology, Wiedermann says, is creating cancer vaccines that stimulate the human immune system to produce its own antibodies to fight cancer.

When, in 1997, young paediatric oncologist, Todd Golub, had the opportunity to test how brand new DNA microarray technology could be applied in cancer research, he faced a dilemma: “The question was, what’s the right experiment to do to really highlight its potential?”

If Golub’s group, working out of MIT’s Whitehead Institute, chose a problem that was too easy to demonstrate, no-one in the research community would care. If they made the problem too hard, they might diminish their chances of success.

The team, which included geneticist and mathematician, Eric Lander, chose to look at how using the microarrays to profile gene expression could help classify cancers. It was among the earliest attempts to move the identification of specific cancers beyond symptoms, responsiveness to treatment, and appearance. To achieve this, the researchers selected two cancers — acute myeloid leukaemia and acute lymphoblastic leukaemia — for which there were existing diagnostic tests. If gene expression profiling enabled them to distinguish between the two malignancies, they would be able to show the accuracy of the new method, says Golub, now director of the MIT/Harvard Broad Institute.

Golub and his colleagues were successful, and could distinguish between the cancers on the basis of the expression of just 50 genes. Nearly 20 years later, the experiment they settled on has become one of the most cited life sciences papers in global patents in the Lens database. Patents range from diagnostic technology for cancer, to skin substitutes for industry use, anti-inflammatory treatments, and algorithms for genomic data analysis.

The study provided a framework for the use of the new DNA microarray technology to classify other diseases besides cancers, including heart disease. It also helped later researchers structure analyses of the vast quantities of information DNA microarrays produce.

Golub says that by using the microarray technology on a problem for which the answer was already known, he and his colleagues enabled other researchers to use it to solve unknown problems, including how to determine the long-term prognosis for many cancer patients. “It opened the floodgates for many groups around the world.”

In an effort to promote further research in the area, and allow other scientists to test the results, the Whitehead Institute team was one of the first to share the vast quantities of raw data generated by the genomic array when the paper was published. It’s a practice that has become industry standard.

Golub says the 1999 paper was as much about illustrating the potential of the new microarray technology — that they didn’t invent — as it was about the science. “That technology in itself was kind of mindblowing.”