Everything’s melting, but Boaty McBoatface is a beacon of hope. 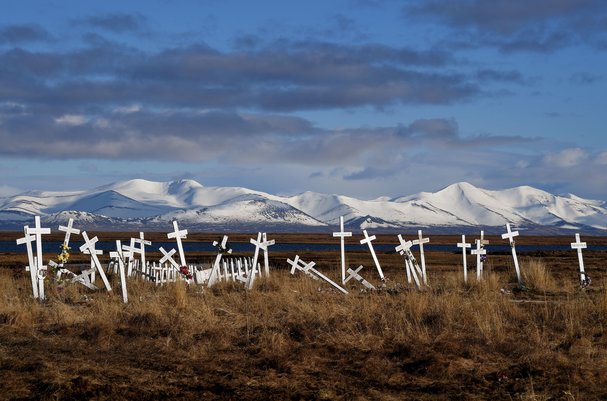 A cemetery sits on melting permafrost tundra at the Yupik Eskimo village of Quinhagak on the Yukon Delta in Alaska in April 2019. This is nearby the Canadian Arctic, at the centre of one of June's most talked-about papers.

The bad news, according to two of the most talked-about studies in June, is that the Himalayas and the Canadian Arctic are melting – and at a much faster pace than predicted.

The good news? Everyone’s favourite autonomous submarine came through with some important new insights from its first mission.

This ranking of June’s most popular papers in the natural sciences, published in 82 high-quality journals tracked by the Nature Index, also put a limit on human endurance, while hinting at unsettling changes in our cells.

Explore Altmetric's ranking of the five most discussed studies in the natural sciences below:

1. Acceleration of ice loss across the Himalayas over the past 40 years

The melting of the Himalayan glaciers has doubled in recent decades, according to this analysis of satellite observations across India, China, Nepal and Bhutan.

The report, by geoscientists at Columbia University and the University of Utah, found that glaciers have been losing the equivalent of more than 45 cm vertically each year since 2000 – double the amount of melting that took place in the preceding 25 years.

The study has been covered by almost 300 news outlets to date, and got a run on Twitter, Reddit, and blogs.

2. Rapid mixing and exchange of deep-ocean waters in an abyssal boundary current

That title might not mean much to you, but what about the words Boaty McBoatface?

The plucky little autonomous sub made news again in June, as results from its first mission were reported by a team from the University of Southhampton, the British Antarctic Survey and the National Oceanography Centre in the UK, and Princeton, Stanford and the Woods Hole Oceanographic Institution in the US.

The sub that launched spirited copycats around the world sourced evidence that revealed for the first time a process that links increasing Antarctic winds to rising sea temperatures.

"This study is a great example of how exciting new technology such as the unmanned submarine ‘Boaty McBoatface’ can be used ... to discover and explain previously unknown processes affecting heat transport within the ocean," one of the authors, Povl Abrahamsen, an observational oceanographer at the British Antarctic Survey, said last month.

Interestingly, the study was a hit with the news outlets, but not so much with social media.

Here's something to keep you up at night: this Science study found that roughly 95% of the 488 healthy people examined were carrying patches of mutated cells, the likes of some of which have been linked to various cancers.

While the study is far from saying we're all carrying potentially dangerous mutations in our tissues, what is interesting is that the team, led by Keren Yizhak of the Broad Institute of MIT and Harvard, found that skin, oesophagus and lung tissues carried the most mutations, likely due to the fact that they are more exposed to UV radiation, smoke and pollutants than other tissues.

The study, also contributed to by Gad Getz, one of Harvard's most prolific authors in the life sciences as ranked by the Nature Index, struck a chord on Twitter, featuring in almost 2,000 tweets so far.

The Himalayas have problems, and so does the Canadian Arctic, according to this study by a team from the University of Alaska Fairbanks in the US, the Northwest Territories Geological Survey in Canada and Germany's Helmholtz Centre for Polar and Marine Research.

Turns out, the thick layers of permafrost that were expected to remain frozen for at least another 70 years have already started thawing.

The data, collected between 2003 and 2016, showed that, in the northernmost site studied, the ground had thawed, melted and sunk by about 90 cm over that period.

The study received a solid response on from news outlets and Twitter alike.

We all have our limits, and this was made abundantly clear by a new Science Advances study, which found that, no matter what the activity, everyone hits the same metabolic limit when engaging in major feats of endurance.

The study, by researchers in the UK, China and the US, looked at activities that take several days, weeks and months to complete, from ultramarathons to pregnancy. The team determined that humans can only burn calories at 2.5 times their resting metabolic rate, after which point the body starts to break down its own tissues.

“Maybe someone will break through that ceiling some day and show us what we're missing."

Tweets, citations and other measures accurate as of 23 July 2019.