The 5 most popular scientific papers of August 2019

A month of spectacular firsts. 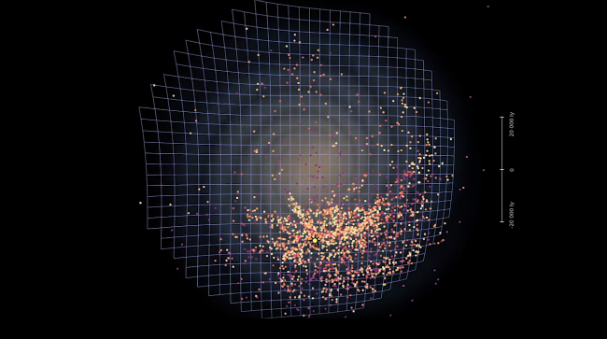 A high-profile paper in August revealed the true shape of the Milky Way.

The most talked-about papers last month reveal the first evidence of a genetic component in same-sex sexual behaviour, and the first skull ever found of a little-known human ancestor was unearthed in an Ethiopian goat pen.

We also got a glimpse of the Milky Way’s bizarre Pringle-like shape and a new pain-sensing organ, and heard the grim news that it’s literally raining plastic in the Arctic.

Below is an Altmetrics ranking of August’s most popular papers in the natural sciences, published by the 82 high-quality journals tracked by the Nature Index.

The study, which analyzed the genetics and sexual behaviour of nearly 500,000 people mostly from the United States and United Kingdom, found that the sex of a person’s sexual partners is influenced by their genes.

Led by Andrea Ganna, a research fellow in Ben Neale’s group at the Analytical and Translational Genetic Unit at the Massachusetts General Hospital, and Harvard Medical School, the study found what all others couldn’t because they were “small and underpowered,”

The paper was the most widely discussed study in August and received an Altmetrics score more than three times that of the paper that was ranked second. It was mentioned by almost 11,000 tweeters and 277 news outlets.

August brought us the most detailed 3D map of the Milky Way ever produced, and it revealed that our galaxy is not a flat disc, but is warped and distorted. To quote a headline by ScienceNews for Students, “The Milky Way is shaped like a curvy potato chip.”

The team, led by astronomer, Dorota Skowron, from the University of Warsaw in Poland, mapped the Milky Way using stars known as Cepheids, and confirmed the findings of a similar study published back in February.

The study was picked up by 176 news outlets and 10 blogs, and was most popular among Mexican and Japanese audiences.

3. "White and wonderful? Microplastics prevail in snow from the Alps to the Arctic"

It’s snowing plastic in the Arctic.

It sounds like something the Onion would come up with, but as lead scientist, Melanie Bergmann, from the Alfred Wegener Institute Helmholtz Centre for Polar and Marine Research in Germany told BBC News: “We expected to find some contamination, but to find this many microplastics was a real shock. It's readily apparent that the majority of the microplastic in the snow comes from the air.”

The study suggests that the plastic particles could be the result of ships grinding against the ice, but wind turbines might also play a role.

The study was picked up by more than 200 news outlets.

A beautifully preserved skull of a little-known human ancestor, Australopithecus anamensis, gave researchers an unprecedented look at one of the earliest hominins to walk on two legs.

The remarkably complete skull was the first of A. anamensis ever found. Discovered in an Ethiopian goat pen by herder, Ali Berein, it’s been dated to 3.8 million years ago.

“It’s the skull we've been waiting for,” Carol Ward, a paleoanthropologist at the University of Missouri, who wasn’t involved with the study, told National Geographic

A small team of researchers from Sweden announced the discovery of a new pain-sensing organ that consists of octopus-like cells called Schwann cells that wrap around nerves like mesh and are sensitive to painful mechanical damage such as pricks and pressure.

The study, which could help researchers better understand pain and how to treat it, was particularly popular among American audiences, and was picked up by more than 100 news outlets and 400 tweeters.