A Neanderthal-derived gene cluster linked to COVID-19 symptoms and a controversial AI algorithm feature in these stand-out studies. 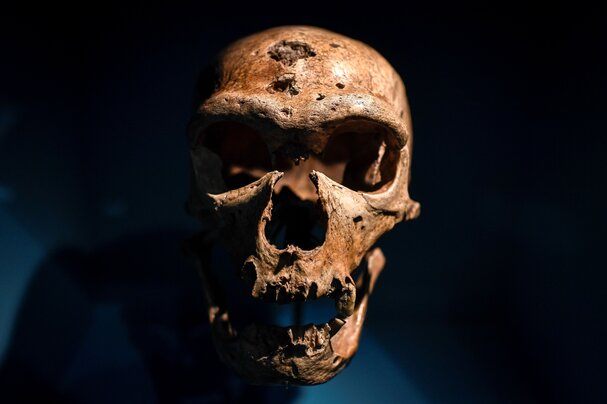 A skull is displayed as part of the Neanderthal exhibition at the Musee de l'Homme (Museum of Mankind) in Paris in 2018. A gene cluster inherited from Neanderthals features in one of the most widely discussed studies of September 2020.

September brought papers that could inform major advances in our understanding of the genetics that underlie a person’s physical response to COVID-19.

It also featured a highly criticized paper describing an algorithm designed to link trustworthiness to certain physical characteristics – an example of AI that appears to carry inherent racial bias.

The papers listed below are among the most popular natural-sciences studies of September, published in the 82 high-quality journals tracked by the Nature Index.

1. “The major genetic risk factor for severe COVID-19 is inherited from Neanderthals”

There is a gene cluster carried by around 50% of people in south Asia and around 16% of people in Europe that is thought to have been inherited from Neanderthals.

This gene cluster, which is found in people from other parts of the world, but less frequently, might also be linked to a higher risk of experiencing severe symptoms after SARS-CoV-2 infection (the virus that causes COVID-19), according to this Nature paper.

Co-authored by Hugo Zeberg and Svante Pääbo from the Max Planck Institute for Evolutionary Anthropology in Germany, the study identified the high-risk cluster by analyzing the genetics of patients who experienced milder forms of COVID-19 and those who required hospitalization.

The researchers say it’s notable that the highest carrier frequency of this gene cluster occurs in people from Bangladesh, where more than half the population (63%) carries at least one copy. They found that individuals of Bangladeshi origin in the UK have about a two times higher risk of dying from COVID-19 than the general population.

The study states that it’s not yet known what feature in the Neanderthal-derived gene cluster confers a higher risk for severe COVID-19, or whether the effects are specific to SARS-CoV-2, or are relevant to other disease-causing pathogens. The authors state that factors such as advanced age also contribute to a person’s risk of experiencing severe symptoms of COVID-19.

The study has been covered by 140 news outlets to date, and has reached an audience of roughly 14 million people on Twitter.

2. “Autoantibodies against type I IFNs in patients with life-threatening COVID-19”

This is another study that examined the characteristics of COVID-19 patients who experienced mild or severe cases of the disease. In contrast with the Nature paper described above, which had only two authors, this Science paper has almost 100 co-authors from around the world, including from the United States, France, and the Netherlands.

The study, led by Paul Bastard from the Laboratory of Human Genetics of Infectious Diseases at the Necker Hospital for Sick Children in Paris, identified genetic risk factors that could potentially be used to identify individuals at a higher risk of developing life-threatening COVID-19 symptoms.

Examining 987 patients with severe COVID-19 pneumonia, Bastard and his colleagues found that more than 10 percent had a specific kind of genetic mutation in 13 genes that govern the function of interferons – signalling proteins produced by cells as part of an inflammatory response to an infection.

The genetic mutation is quite rare in the general population; it was found in just 4 of 1,227 randomly selected healthy people.

Along with another study published in Science in September by many of the same researchers (see the paper ranked third in this list), the findings are the first results to come out of the COVID Human Genetic Effort, an international project that brings together more than 50 sequencing hubs and hundreds of hospitals from around the world.

The paper was covered by more than 200 news outlets and reached an audience of almost 10 million on Twitter.

3. “Inborn errors of type I IFN immunity in patients with life-threatening COVID-19”

This paper, as mentioned above, was produced by members of the COVID Human Genetic Effort. Led by Qian Zhang from the St. Giles Laboratory of Human Genetics of Infectious Diseases at The Rockefeller University in New York, it was co-authored by Paul Bastard, lead author of the paper ranked second in this list. It’s another ‘megapaper’, with more than 100 authors.

Here, the researchers analysed the DNA of 659 patients with life-threatening cases of COVID-19 and 534 patients who had mild or asymptomatic cases, and identified key differences in eight genes associated with an important class of immune-system molecules called type I interferons.

Two of the genes they looked at, TYK2 and DPP9, play a role in the body’s inflammation response. If the TYK2 gene is faulty, for example, a person’s immune response can result in harmful levels of lung inflammation.

The paper found that roughly 3.5% of patients with life-threatening COVID-19 pneumonia had genetic defects in at least one of the eight genes studied. The paper suggests that these genetic abnormalities are one factor of many that could contribute to a person’s risk of developing severe COVID-19 symptoms.

The paper has been covered by more than 160 online news outlets to date, including the BBC, Los Angeles Times, and NBC News. It reached an audience of more than 20 million on Twitter, gaining the most attention from members of the public in Saudi Arabia and the US.

This controversial paper is currently under review by a Nature editorial team following widespread criticism.

Led by Lou Safra from the Laboratory of Cognitive Neurosciences at the French National Institute of Health and Medical Research, INSERM (Institut National de la Santé et de la Recherche Médicale) in Paris, the paper introduces an algorithm designed to automatically generate ‘trustworthiness evaluations’ based on facial features and expressions in paintings from the UK’s National Portrait Gallery collection and Web Gallery of Art, which index 1,962 and 4,106 pieces of art, respectively.

The authors conclude that the results show that trustworthiness in portraits increased between the years 1500 to 2000, which coincided with a “decline of interpersonal violence and the rise of democratic values observed in Western Europe” and increased living standards.

To test the validity of their results, the researchers applied their algorithm to selfies posted on Instagram in Bangkok, Berlin, London, Moscow, New York and Sao Paulo in 2013. “[W]e found that people located in places where interpersonal trust and cooperation are higher (as assessed in the European and World Value Surveys) displayed higher levels of trustworthiness in their selfies),” the paper states.

Critics have accused the authors of reviving practices such as phrenology and physiognomy, which claim that it’s possible to discern certain character traits based on a person’s physical appearance.

Rory Spanton a PhD researcher in cognitive psychology at the University of Plymouth, UK argued in a piece on Medium that among other problems, the paper used an algorithm that was trained on predominantly white people, so it “‘learned’ that the facial hallmarks of trustworthiness are those most associated with whiteness.”

Despite only being covered by 18 news outlets, the paper reached an audience on Twitter of more than 10 million, according to Altmetric.

Led by Annika Nelde, Tatjana Bilich, and Jonas S. Heitmann from the Department of Internal Medicine at the University Hospital Tübingen in Germany, this paper looks at T cell immunity – central for the control of viral infections – in relation to COVID-19.

More than 180 COVID-19 patients volunteered to be involved in the study, which identified T cell characteristics that could be used to identify people who have been infected with and people who have never been exposed to SARS-CoV-2.

These characteristics, called epitopes, are not only important for the investigation and diagnosis of SARS-CoV-2 immunity, says research group leader Juliane Walz, also from the University Hospital Tübingen, but could represent the basis for the development of new vaccines.

The paper has been mentioned by more than 5,000 Twitter users, reaching an audience on the platform of more than 9 million.