COVID-19 vaccine hopes, and the environmental effects of the pandemic. 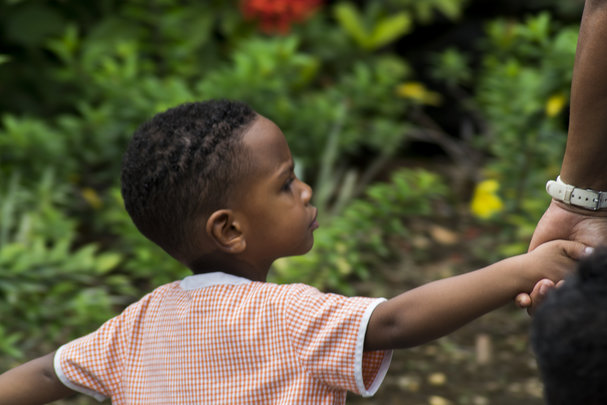 As global warming intensifies over the next 50 years, 3 billion people could find themselves in unliveable conditions. The development of countries in the Global South, such as Guadeloupe, where this boy lives, is imperative to ensuring their future, says a PNAS study published in May.

Below are the five most popular natural sciences papers of May, published in the 82 high-quality journals tracked by the Nature Index.

This is the first month in which COVID-19-related studies have dominated.

Ranked by Altmetric attention score, May’s most popular studies feature key findings on the body’s immune response to the virus and the potential for a vaccine.

Two of the five papers listed below were led by immunologist, Dan H. Barouch, and his team at the Center for Virology and Vaccine Research at the Harvard Medical School’s Beth Israel Deaconess Medical Center in Boston, Massachusetts.

The study that garnered the most attention, published on May 20 in Cell, has reached more than 22 million people on Twitter so far.

1. “Targets of T Cell Responses to SARS-CoV-2 Coronavirus in Humans with COVID-19 Disease and Unexposed Individuals”

One of the earliest detailed analyses of the human immune response to SARS-COV-2 (the virus that causes COVID-19), this paper supported hopes that a viable vaccine could be developed.

Led by Alba Grifoni from the US Center for Infectious Disease and Vaccine Research, the study describes a robust immune response to SARS-CoV-2 in a group of 20 adults who had recovered from COVID-19. Most of the patients had recovered from a mild case of the virus, but a few in the group had more severe cases.

The findings show that the body's immune system is able to recognize SARS-CoV-2 in several ways – a factor that is crucial for vaccine development.

The paper, which was the most talked-about for May 2020, has been covered by 169 online news outlets so far, and was tweeted about by more than 6,000 accounts.

When the world went into lockdown, many pondered the effect that self-isolation would have on the environment.

A team led by Corinne Le Quéré, professor of climate change science and policy at the University of East Anglia in the United Kingdom, used a combination of energy, activity, and policy data to estimate the changes in daily carbon dioxide (CO2) emissions during the COVID-19 confinement period (January to April 2020).

They found that average daily global CO2 emissions fell by 17% compared with 2019 levels. At the height of the pandemic in April, daily emissions were comparable to 2006 levels.

Le Quéré’s team identified the shutting down of international borders, reduced daily transport, and a shift in consumption patterns as the main drivers for change.

A more recent report, released by the same researchers on June 11, showed that emissions are now only about 5% lower than 2019 levels.

“We still have the same cars, the same roads, the same industries, same houses,” Le Quéré told National Geographic. “So as soon as the restrictions are released, we go right back to where we were.”

The original study in Nature Climate Change in May, has been covered by 282 online news outlets so far, and retweeted by 3,500 Twitter users.

This study set out to address a key unanswered question: does infection with SARS-CoV-2 result in protective immunity against re-exposure?

A team led by Abishek Chandrashekar and Dan H. Barouch from the Harvard Medical School developed a rhesus macaque model of SARS-CoV-2 infection. They wanted to see how the monkeys’ immune systems would respond when they were infected, allowed to recover, and then infected again.

The study reports that the immune response stimulated by the initial infection provided protection from the disease the second time around. The results suggest the viability of a vaccine for SARS-CoV-2.

The paper has been covered by almost 100 online news outlets and more than 8,500 users on Twitter, reaching an audience on the platform of almost 46 million.

Another study involving Dan H. Barouch’s team at Harvard, this one trialled 6 prototype vaccines on 25 rhesus macaques infected with SARS-CoV-2.

Compared with the 10 control animals, the vaccinated monkeys “saw a substantial degree of protection”, Barouch told Reuters. Eight showed no detectible signs of the virus.

Published in Science, the study could have implications for the effectiveness of vaccines in humans, but human trials are needed to demonstrate their potential.

The paper was covered by 75 online news outlets and more than 5,000 Twitter users retweeted it. Members of the public accounted for 85% of its Altmetric attention score.

5. “Future of the human climate niche”

According to this paper, which is the only non-COVID-19-related study in May’s top five, humans have settled in a “surprisingly narrow” subset of Earth’s available climates for at least the past 6,000 years.

Sourcing data from the WorldClim dataset, a team led by Chi Xu from Nanjing University in China, found that the majority of people have lived in regions where the annual average temperature ranges from 11 to 15 degrees Celsius.

As global warming intensifies over the next 50 years, as many as 3 billion people could be forced to live outside such conditions, the paper predicts.

The study authors say that the development of countries in the Global South is imperative to ensuring the liveability of many parts of the world in the coming decades.

They also raise the question of how population redistribution could come into play, as certain regions become too hot.

“Absent climate mitigation or migration, a substantial part of humanity will be exposed to mean annual temperatures warmer than nearly anywhere today,” the team concludes.

Published in PNAS, the paper has been covered by more than 150 online news outlets so far, and reached almost 5 million people on Twitter.