The 5 most popular scientific papers of December 2019

The genetic basis of wealth, and a wad of ancient chewing gum. 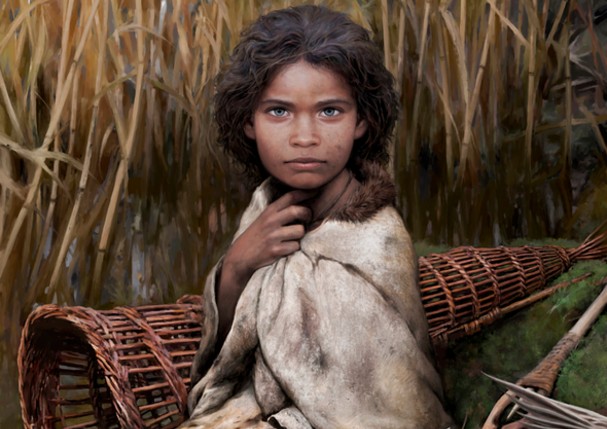 An artistic reconstruction of the woman who chewed the birch pitch and has been named Lola.

The year 2019 was the second hottest in recorded history. So it’s only fitting that its final month was marked with some exceptional climate change papers that emphasise the severity of the situation Earth now finds itself in.

But it’s not all bad news. December also dished up a delightful discovery of a 5,700-year-old piece of birch pitch, chewed up and spat out by an ancient human whose DNA points to blue eyes.

Here is an Altmetrics ranking of December’s most popular papers in the natural sciences, published in the 82 high-quality journals tracked by the Nature Index.

Do our genes influence whether we end up wealthy or poor?

This large-scale genetic study of 286,301 participants in the UK identified 149 genetic loci that the researchers say are associated with income.

The team, led by W. David Hill, a statistical geneticist at the Centre for Cognitive Ageing and Cognitive Epidemiology at the University of Edinburgh, says many of these loci are also associated with intelligence.

The paper, which reached almost 10 million people on Twitter, proved controversial, with scientists taking issue with the fact that the dataset correlated individual genetics with household income, rather than individual earnings.

Another complaint, Michael Schulson reports for Undark, is that "things like income are profoundly shaped by a host of other, more direct factors, including geography, racial discrimination, gender biases, and that other decidedly non-genetic type of inheritance: parental wealth."

This study describes how a piece of birch pitch, chewed on by an ancient human female in southern Denmark, was extracted during archaeological excavations at a site called Syltholm.

The DNA-rich sample allowed researchers from the University of Copenhagen to extract the ancient human’s entire genome, which revealed that she probably had dark skin, dark hair, and blue eyes.

This represents the first time that a complete ancient human genome was extracted from something other than human bones.

The paper reached more than 6 million people on Twitter, and was covered by more than 250 online news outlets.

3. “The impact of high ambient temperatures on delivery timing and gestational lengths”

Could climate change be linked to shorter pregnancies?

This study, which draws on information from 56 million births across the United States between 1969 and 1988, estimates that an average of 25,000 infants per year in the United States were born earlier as a result of heat exposure.

Andrew Shennan, professor of obstetrics at King's College London in the UK, who was not involved in the study, said the results should not cause panic among expectant families.

"Given the wide variety of temperatures around the world, and that most women have normal pregnancies, this is unlikely to be an important risk factor for any individual," he told Patrick Galey at Phys.org.

According to an Altmetric analysis, the paper was covered by more than 270 online news outlets.

4. “Pervasive human-driven decline of life on Earth points to the need for transformative change”

Desperate times call for desperate measures, an international group of 28 scientists state in this high-profile paper.

Described as an “unflinching examination” of just how much work it will take to address the economic, social, and technological causes of human-driven decline of life on Earth, the paper reviews the findings of the largest assessment to date of the state of nature.

"We cannot save the planet – and ourselves – until we understand how tightly woven people and the natural benefits that allow us to survive are," co-author Jianguo "Jack" Liu from the Center for Systems Integration and Sustainability at Michigan State University said in a press release.

The paper reached more than 13 million people on Twitter and was particularly popular among US audiences.

5. “Evaluating the performance of past climate model projections”

The first systematic review of climate models dating back to the 1970s revealed that projections of temperature changes over the last 50 years have been remarkably accurate.

Led by Zeke Hausfather from the University of California, Berkeley, the study compared 17 climate models with observational data for the corresponding timeframes.

These models are now outdated, having been replaced by more sophisticated technologies, yet, Hausfather told The Guardian, 14 of the 17 model projections were “indistinguishable from what actually occurred”.

The paper was covered by almost 70 online news outlets and reached more than 7 million people on Twitter.