5 Australian universities that are rising fast in the Nature Index 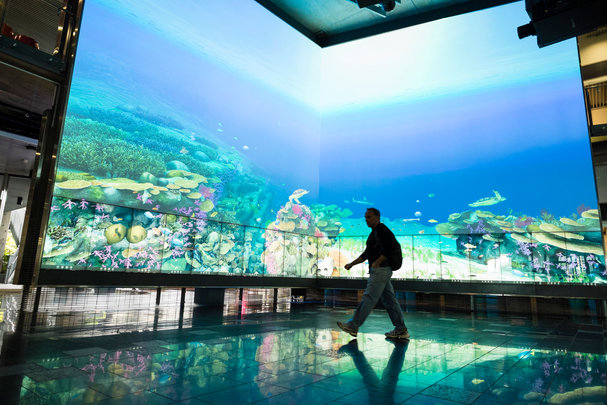 The Cube is one of the world's largest digital learning and display spaces providing an interactive experience of QUT's science and engineering research.

The Queensland University of Technology (QUT) is Australia’s fastest-rising university in the Nature Index.

Between 2015 and 2018, QUT’s Share+ made an impressive leap, achieving almost double the growth of the University of Technology, Sydney, in second position.

At just 31 years old, Queensland University of Technology (QUT) is punching above its weight as a prolific publisher of high-quality research in the Nature Index journals. Since 2015, QUT’s Share has more than doubled, making it the fastest rising university in Australia. In Nature Index’s 2019 Young Universities, is a measure of an institution's contribution to articles in the 82 journals tracked by the index, calculated according to the proportion of its affiliated authors on an article relative to all authors on the article., QUT was placed 30th in the world.

In March 2020, QUT researchers published a paper in Advanced Materials describing how organic pigments can be integrated with flexible electronics, wearables, and biodegradable devices. The approach could offer an inexpensive and low-waste alternative to conventional electronics manufacturing.

Founded in 1988, the University of Technology, Sydney (UTS Sydney) has developed into one of Australia’s leading producers of high-quality research. It’s a particularly strong performer in the physical and Earth and environmental sciences, which account for more than 75% of its Share in the Nature Index.

UTS Sydney is home to more than 50 research centres and institutes focussing on areas such as health, data science, sustainability, and future work. Its international collaborations account for more than 70% of its partnerships. Last year, its student enrolment numbers were 46,159, and it has 4,174 full-time staff.

In 2019, UTS Sydney researchers led a study that showed how severe marine heatwaves are responsible for unprecedented levels of death and decay in coral reefs. The Current Biology paper was the university’s most talked-about article on the web for the year, according to Altmetric.

Established in 1971, and now with six campuses in southeast Queensland, Griffith University has become one of Australia’s fastest growing universities. Since 2015, its Share has almost doubled in the Nature Index.

Griffith employs roughly 3,000 academics and collaborates with more than 5,200 national and international partners. Among its 22 research centres and institutes is the Centre for Quantum Dynamics, the Queensland Micro- and Nanotechnology Centre, and the Australian Research Centre for Human Evolution.

Last year, Griffith University researchers were involved in the discovery of the oldest known evidence of Homo sapiens outside of Africa (Nature) and a newly identified species in the Philippines, dated to 67,000 years ago, that likely belonged to the Homo genus (Nature).

Curtin University is the largest university in the state of Western Australia and has overseas campuses in Malaysia, Singapore, Dubai, and Mauritius. In the Nature Index 2019 Young Universities, Curtin was the highest placed Australian university, in 23rd position. Curtin has the largest Share (36.09) among the five fastest rising universities in this list, with a 24% increase between 2015 and 2018.

Curtin has 3,195 staff, including 1,126 full-time employees and 569 researchers. Its Institute of Radio Astronomy team is involved in the Square Kilometre Array (SKA) project, which aims to build the world’s largest radio telescope in Western Australia by 2025. In partnership with the University of Western Australia, Curtin is helping to develop SKA’s facilities in the remote Shire of Murchison, a vast area of 50,000 square kilometres, with a population of just 113.

In 2019, Curtin researchers were part of an international team that detected the origin of a single fast radio burst – a transient flash of radio waves from a distant astronomical source – for the first time. The findings, published in Science, could help researchers measure the amount of matter in intergalactic space.

After operating as a private college for more than a century, Royal Melbourne Institute of Technology (RMIT University) was granted university status in 1992. In addition to having campuses in Melbourne’s northern suburbs, RMIT also has two campuses in Vietnam.

RMIT is involved in a number of multi-partner collaborations, including 10 cooperative research centres and five Australian Research Council Centres of Excellence. It is also involved in 20 research projects based in the European Union, such as the University of Rome’s PEPSA-MATE, which aims to develop more sustainable alternatives to non-degradable, synthetic materials.

In a 2019 Science Advances paper, RMIT researchers revealed that honeybees can solve basic mathematical problems, such as addition and subtraction. According to Altmetric, the paper has been mentioned by 600 Twitter users, 153 online news outlets, and 22 blogs.

+Share, formerly referred to in the Nature Index as Fractional Count (FC), is a measure of an institution's contribution to articles in the 82 journals tracked by the index, calculated according to the proportion of its affiliated authors on an article relative to all authors on the article.

Editor’s note: The Nature Index is one indicator of institutional research performance. The metrics of Count and Share used to order Nature Index listings are based on an institution’s or country’s publication output in 82 natural science journals, selected on reputation by an independent panel of leaders in their fields. Nature Index recognises that many other factors must be taken into account when considering research quality and institutional performance; Nature Index metrics alone should not be used to assess institutions or individuals. Nature Index data and methods are transparent and available under a creative commons license at natureindex.com.