The results come despite a gender equity push at the National Health and Medical Research Council. 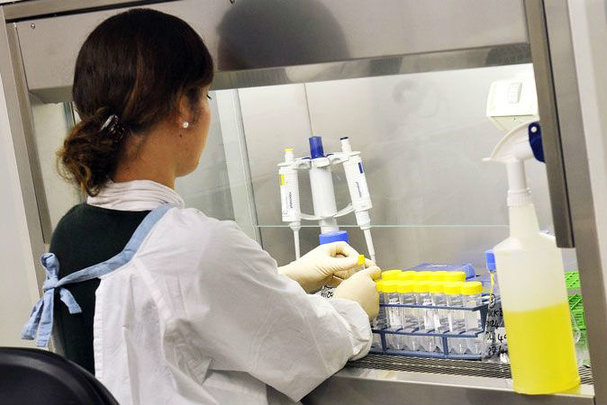 Gender disparities in research funding are a global problem.

Female scientists in Australia were less likely to win a major type of medical-research grants this year than their male counterparts, despite an overhaul of the country’s science funding that was supposed to address gender inequity.

The funding imbalance occurred in the National Health and Medical Research Council (NHMRC) ‘investigator grants’, which were first awarded to individuals in late August, and was particularly severe at senior levels.

“We’re putting millions of dollars into programmes and time and effort to maintain women in STEM, but then we only fund five [senior women]. It’s a poor message,” says Marguerite Evans-Galea, a molecular biologist in Melbourne and the co-founder of the non-profit association Women in STEMM Australia.

The results were released on the NHMRC's website. Grant application success rates were more closely matched between men and women at the early- and mid-career stages, with the big discrepancy appearing for senior leaders (see graphs below).

But overall, success rates were higher for men than for women (14.9% versus 11.3%), reflecting a consistent pattern in the agency’s funding outcomes since 2001. 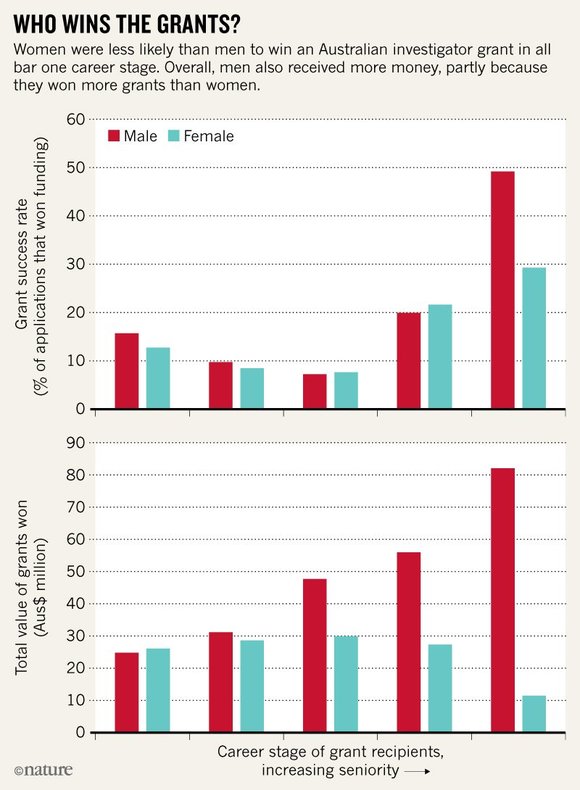 Gender disparities in research funding are a global problem, says Theresa Woodruff, an obstetrician and advocate for women in science at Northwestern University in Chicago, Illinois.

Earlier this year, Woodruff published a study1 that found the US National Institutes of Health (NIH) awarded female first-time principal investigators significantly smaller grants than those given to men in the same role. The NIH did not respond to questions about the study by Nature’s deadline.

The Australian NHMRC has acknowledged the problem in the past. In a gender strategy report released last year, the council said that it was restructuring its grant-funding programmes, partly to improve gender equity.

In the past, researchers had to apply for separate grants to fund their scientific work and their salaries. By contrast, the new investigator grants pay for salary and research, and allow projects to continue if leaders need to work part-time because of responsibilities such as childcare.

The outcomes of three other new grants programmes, also designed to provide greater funding opportunities for women, will be announced later this year.

A spokesperson for the NHMRC says the agency did allocate additional funding to a small number of female-led applications that weren’t initially earmarked to receive money, which reduced the difference between men and women. The agency also said it will do an analysis to identify the reasons for any inequity in investigator funding rates.

Frederic Meunier, a neurobiologist at the Queensland Brain Institute in Brisbane, says the NHMRC's attempts to reduce inequity may take time to bear results.

Evans-Galea says more can be done. She thinks the funding disparity is linked to how grant applications are evaluated. Panels of peer-reviewers assess an applicant’s career and achievements, but she thinks this process does not adequately take into account the impact of disruptions, such as taking time off for parenting — which often affect women more than men. She suggests that funding should be split to support an equal number of female- and male-led projects.

The NHMRC spokesperson says that peer reviewers are guided on how to take career disruptions into account. But the agency will continue to identify ways to retain women in health and medical research, the spokesperson says.

Woodruff says the funding disparity between male- and female-led research has had a chilling effect, and is likely the reason some women leave scientific research as their careers' progress — a phenomenon often called the leaky pipeline. She suggests that this is why there are fewer senior women applying for funding.

But she notes that funders identifying the gender imbalance is a major step towards addressing the number of women dropping out of science. After seeing the data, funders have an opportunity to address the issues, she says.

“If we get the economics right, women and men [will] compete easily and together in intellectual productivity.”

This article was first published on nature.com. Original article.