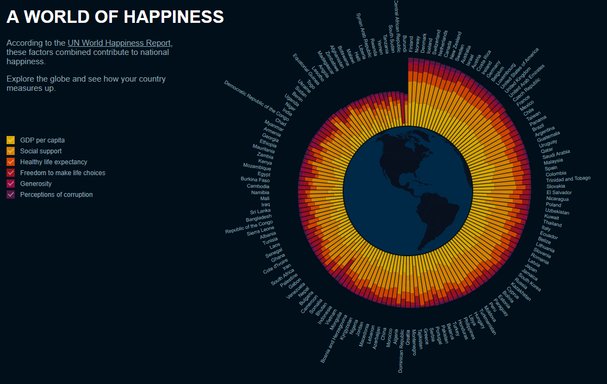 Money does not equal happiness, but it certainly helps. This interactive visualization by Benjamin Scott, a bioinformatics researcher at the Natural History Museum in London, reveals the happiest countries in the world and the factors that contribute to the satisfaction of their people.

The visualization is based on data from the annual World Happiness Report, which ranks 156 countries according to perceptions of happiness among its people. Published in March, the report is produced by the United Nations Sustainable Development Solutions Network in partnership with the Ernesto Illy Foundation.

The report explores the relationship between happiness and specific metrics such GDP per capita, social support, healthy life expectancy and perceptions of corruption.

Clicking on the coloured boxes reveals where each country ranks in each measure, while selecting all the boxes shows the overall happiness rankings. Explore the full interactive visualization here.

Scandinavian countries lead the way in the happiness ranks, with Finland topping the charts followed by Denmark and Norway. Australia, New Zealand and Canada are also among the top 10 happiest nations. (We note that Singapore, which ranks 34th in the World Happiness Report, does not appear in the visualization.)

African countries dominated the 10 least happy countries, with Burundi, which has particularly low GDP per capita, ranked behind all other the nations. The Central African Republic is not far behind, despite taking the top spot overall in generosity and second place in freedom to make life choices.

While GDP appears to play a significant role in life satisfaction, being cashed-up isn’t everything. Qatar and Saudi Arabia are the richest nations among the ranked countries, but don’t rank in the top 20 for overall happiness.

Another interactive visualization based on the World Happiness Report, created by Rebecca Barter from the Department of Statistics at the University of California, Berkeley, includes additional variables that are linked to happiness, including school years, sustainable economic development, health expenditure and employment rate.

The number of years spent in school and tertiary education plays a role in overall happiness, with happy countries Australia, Iceland and Belgium spending an average of 20 years in the classroom, the highest of all nations included in the visualization.

And although Australia and New Zealand spend around half as much per person on healthcare as the United States (US$4,492, US$3,530 and US$9,536 respectively), they are ahead of the country in overall happiness.

Below you can see the US as a major outlier in healthcare spending:

This graphic reveals the most innovative countries for 2019

Ranking the most popular degrees in the US