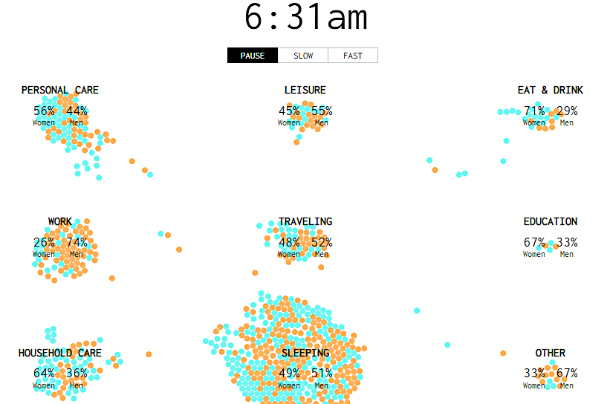 This visualization by Nathan Yau from Flowing Data shows how men and women engage in various types of activities at various times of the day.

The data comes from the American Time Use Survey, (ATUS) a rich database used by researchers to explore a range of issues related to how, where, and with whom Americans spend their time.

The ATUS data files include information from more than 200,000 interviews conducted between 2003 and 2018. They have yielded insights related to economic research, health and safety, family and work-life balance as well as international comparisons.

For example, Deloitte reports that, thanks to ATUS, we know that Americans with either part-time or full-time jobs are spending more time at work and on work-related activities today than they did in 2003.

Research scientists can probably relate, as this story about chronic time stress among early career researchers, and how they spend their work days, shows. And there's been a decline in time spent on sports, exercise, and recreation over the same period, despite an increase in the percentage of people engaging in such activities.

We found it mesmerizing to watch the explosion of activity at certain times of the morning, such as when so many people spark into action at 6:30am, readying themselves for work:

As Yau explains, household care refers to household work such as cleaning, cooking and laundry, as well as caring for others (children, for example). It occupies a much higher percentage of women’s time than men’s throughout the day,

"I was kind of surprised that the split for paid work isn’t closer to 50-50," Yau adds.

"The distribution of women and men [in paid work] is almost the inverse of the distribution for household care. But that seems to make sense, if we assume women tend to reduce work hours to take care of more household responsibilities."

Simulated a day in the life of men and women https://t.co/LoRFuoQDqn pic.twitter.com/Kvrm2fUcdL

The visualization, called a moving bubbles chart, is good for visualizing clusters and distributions, for example, of the movement of researchers or graduate students around the world or among institutions.

Explore the “Day in the Life” visualization here.

The Flowing data website looks at how statisticians, designers, data scientists, and others use analysis and visualization to better understand data.

‘I’ll work on it over the weekend’: high workload and other pressures faced by early-career researchers