A study revealing the decline of the Great Barrier Reef was one of the most discussed articles of 2018. 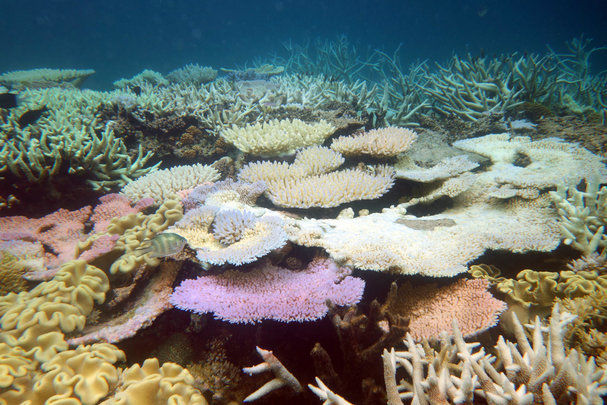 When Terry Hughes began researching coral reefs 30 years ago, he did not expect to witness the rapid die-off of the Great Barrier Reef. “I never thought I would write a series of papers on not just one, but two back-to-back events triggered by global warming in 2016 and 2017,” says Hughes, a marine biologist at James Cook University.

Now, in addition to conducting research, Hughes also spends a lot of his time providing briefings to politicians and “anyone else who will listen”.

“I see this outreach as a civic responsibility,” says Hughes. “If your research is worth doing, it’s worth communicating.”

One of the papers Hughes published last year was a particularly dire outlook for the world’s largest reef system. It revealed that the 2016 marine heat wave led to the death of almost half of the coral inhabiting the Great Barrier Reef. The once diverse reef system could soon be made up of just a few tough coral species, changing its structure and appearance.

The bleak paper rocketed to third place among the top articles published in the journals tracked by the Nature Index in 2018. Its Altmetric Attention Score, which measures an article’s online activity, was 4,386 as of 9 January 2019.

Hughes and his team used satellite data and aerial and underwater surveys to assess the scale of the damage caused by the 2016 heat wave across the entire 2,300 kilometres of the Great Barrier Reef. They found that of the 3,863 reefs that make up the system, 29% lost two-thirds or more of their corals in just nine months. The reef underwent another severe bleaching event in early 2017.

Under abnormally high temperatures, corals expel the algae that inhabit their calcium carbonate skeleton in a process known as bleaching. Although corals often bleach in response to heat, the team found that many species died from heat stress before bleaching could even take place. Staghorn and tubular corals fared the worst, and it will take at least a decade for those populations to recover, says Hughes.

New paper on #GreatBarrierReef - from @ProfTerryHughes & colleagues - mass mortality of #corals post-bleaching both adds to and far exceeds the influence of #cyclones and other local pulse disturbances. #climatechange https://t.co/APwaM6FTZ4

The paper informed nearly 200 news reports around the world. The Atlantic’s headline read like an obituary: “Since 2016, half of all coral in the Great Barrier Reef has died”. BBC News provided a graphic description: “Heatwaves ‘cook’ Barrier Reef corals”.

Climate scientist, Kim Cobb, told The Washington Post that the paper “is a grim post-mortem of an event that may very well mark the beginning of the end for many iconic reefs as we know them today.”

Another study led by Hughes, which reached eighth place among the top articles published in Nature Index-tracked journals in 2018, found that the frequency of coral bleaching events has increased fivefold over the last 40 years.

In 2017, Hughes published a paper linking sea temperature rise to mass bleaching events, which made it to #21 in the Altmetric Top 100 Articles in 2017 list.

It's NOT too late to save the #GreatBarrierReef from climate change, but we ARE running out of time - our latest paper today in @nature https://t.co/YeW6ymNDok https://t.co/cFuICWp8Hx