Paris excels in intra-city collaborations but needs to look beyond its borders to increase research performance. 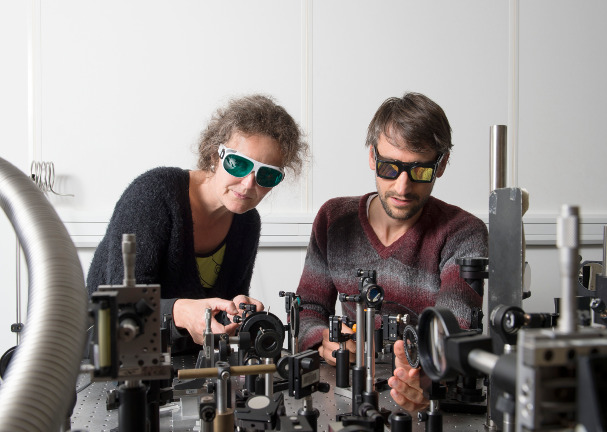 Alberto Amo and Jacqueline Bloch of Laboratory of Photonics and Nanostructures perform an optical experiment as part of the CNRS work on polaritons.

While international collaboration networks have become the hallmark of science, an analysis of papers included in the Nature Index reveals a large portion of top research is still produced by groups in the same city or neighbourhood.

Taken at face value, the data indicate that Paris is the intra-city collaboration champion in 2015, forming 1,932 partnerships. In this context a partnership is between two universities or research organizations that have authors on papers in any of the 68 top natural science journals included in the index. The top 50 partnerships are show on the map below.

What’s on the map: Circles show an institution’s contribution to journals in the index, a measure known as fractional count (FC). Lines denote collaborations between pairs of institutions in the Paris metropolitan area on papers included in the index. Line thickness represents the strength of a collaboration between two institutions, which is measured by bilateral collaboration score.

But the numbers don’t tell the full story.

The top partnership in Paris last year was between Paris Diderot University and the Pierre and Marie Curie University (UPMC), exploiting their mutual strength in physical sciences. Researchers from both universities were part of the team that observed gravitational waves, published in a landmark Physical Review Letters paper this year.

The connection between these institutions is historic. Until 1968, both were part of the University of Paris (the Sorbonne), which was then the only university in the French capital. But, after a series of student and worker protests and calls for reform in May of that year, the government took steps intended to quell the political fervour. One move was to break the Sorbonne up into 13 autonomous universities. Despite the split, Paris Diderot University, known as Paris 7, and the UPMC, Paris 6, continued to share a campus until 1996.

Olivier Pironneau, professor emeritus of applied mathematics at UPMC, says part of the legacy of that era is that collaborations among those at the 13 institutions tracing back to the Sorbonne arise more or less naturally. The centuries-old bonds between these centres of scholarship were not completely dissolved by the government’s restructuring.

When Diderot and UPMC went their separate ways, Pironneau recalls that there was a heated argument over where the library should be located. The compromise was that books would go to Diderot, and periodicals would be kept at UPMC, a situation that continues to this day. “It doesn’t make much sense,” says Pironneau. “But periodicals can now be consulted online, so it doesn’t much matter.”

In the index, UPMC was a partner in five of Paris’ ten strongest collaborations, measured by the size of joint contributions to articles in 2015, and was followed by Paris Diderot University.

Public research institutes such as the Atomic Energy and Alternative Energies Commission (CEA) and the French National Institute for Health and Medical Research (INSERM) were also members of many of the city’s top collaborations. Both organizations seek to forge close partnerships with other public and private research institutions. In the case of INSERM, all its researchers are embedded in French universities or hospitals, while the CEA has dozens of research units with its partners.

Recent administrations have gone a step beyond just encouraging collaboration between institutions, going as far as suggesting some universities should merge to achieve a critical mass. UPMC and Paris-Sorbonne University will merge by 2018, although remain on their own campuses.

University presidents have also directed researchers to join forces to boost France’s poor track record in academic rankings, such as the Shanghai Academic Ranking of World Universities, says Pironneau. “Not that this has made much difference so far,” he says. Only three French universities made the top 100 ranking this year, two in the top 50.

One explanation for the plethora of collaborations in Paris is the country’s focus on research projects that combine multiple disciplines, a trend that has increased over the past 15 or 20 years, under the direction of both centre-left and centre-right governments.

Bernard Meunier, the president of the French Academy of Sciences, says this focus on multidisciplinarity encourages researchers to join forces to increase their chances of being awarded funding. “Of course we need multidisciplinary research, provided that it is driven by research and not the opportunistic creation of artificial clusters in order to obtain funds,” he says.

Meunier also says that scientists report it is now extremely difficult to obtain research funding without creating a consortium of teams. “There are often three, four or even more teams involved in projects in the life sciences,” he says. Policies that encourage multidisciplinarity result in each individual team getting less money than they would like to do their research. “The cash is so thinly spread that the researchers are happy to have some of it, but are unhappy that the amount is so limited,” he adds.

While collaborations amongst groups from different disciplines are encouraged in other countries, Meunier maintains that France is an extreme case. “Nowhere has the change been more marked than here,” he says.

Meunier argues that the shift has now gone too far, with the French National Research Agency (Agence Nationale de la Recherche, ANR) now usually rejecting original ideas from a single team. This is a particular problem for senior researchers, who cannot reply on special funding schemes like those for early-career researchers. The ANR declined to comment on Meunier’s view.

Meunier would like France to emulate the European Research Council’s (ERC’s) practice of granting funds to principal investigators (PI), who then form their own teams from different disciplines as appropriate, which would make the process more efficient. “If 500 million euros a year were awarded to PIs for basic research in France, that would be quite a different matter and would give French scientists hope for the future,” he says.

Most public research in France is supported by the government through universities and major agencies such as the CNRS, INSERM and INRA, which cover lab operating costs and salaries. The National Research Agency (Agence Nationale de la Recherche, ANR) funds competitive grants for basic and applied research. Last year the ANR’s budget was €528.1 million, down from €553.7 million in 2014. Money also comes from the European Research Council and industry grants.

The government’s junior minister for higher education and research, Thierry Mandon, acknowledges that the process of applying for research funding needs simplification. He has introduced a first series of 50 simplification measures. Meunier welcomes this initiative, but is sceptical about the difference it will make. “France has an amazing capacity to resist simplification,” he says.