Uncertainty about the United Kingdom’s role in EU science is damaging research networks. 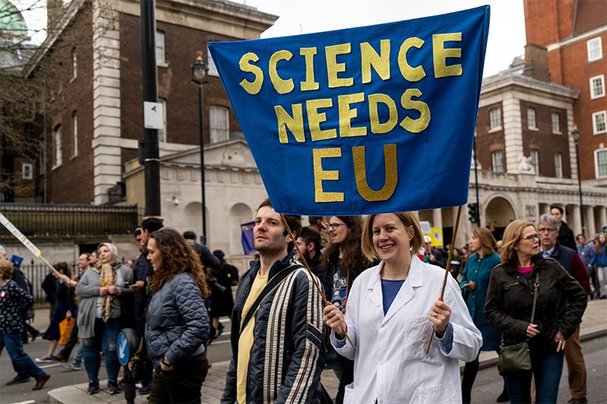 Protesters at a central London rally highlight the perils for science if the United Kingdom leaves the European Union.

The United Kingdom has already missed three deadlines for leaving the EU. Although the terms of the country’s withdrawal from the bloc have been agreed, political manoeuvring has stalled the ratification of this treaty.

To break the deadlock, the United Kingdom is gearing up for a general election on 12 December, and faces a new Brexit deadline of 31 January 2020.

Even if the withdrawal treaty is ratified, it does little to resolve the country’s long-term links with European science, which would be thrashed out in subsequent negotiations.

If the United Kingdom leaves the EU next year without a deal in place to smooth the way, UK scientists could immediately lose access to the EU funding and collaborations that underpin their research.

These changes could have far-reaching effects on existing partnerships. UK researchers collaborate more with researchers in other EU countries than any other region.

According to the Nature Index, collaborative articles by UK–EU researchers in five leading journals (Nature, Science, Proceedings of the National Academy of Sciences, Nature Communications and Science Advances) grew by 36% between 2015 and 2018, although for reasons still not clear, the growth in collaborative articles across all 82 journals tracked by the index has stalled since before 2016, when the vote to leave the EU was taken.

The United Kingdom has also benefited significantly from EU research programmes. Huge schemes such as Horizon 2020, the EU’s €77 billion (US$85 billion) research and innovation programme, have provided a useful protocol for cross-border collaboration, facilitated by funding and helpful immigration arrangements. “

If Brexit goes ahead with a withdrawal agreement in place, most researchers hope it will pave the way for the United Kingdom to participate in Horizon Europe as an associate member, an option the UK government says it will consider.

This might involve paying into the central fund, so that UK researchers can apply for grants in the same way as EU members, albeit with little influence over the programme’s strategy.

Peter Coveney, a computational scientist at UCL, coordinates two major projects that apply advanced computing to biological modelling, backed by €12 million in Horizon 2020 funding. In September, he learnt that the European Commission would ask UK project coordinators to step down in the event of a no-deal Brexit.

To counter that, Coveney is ready to move the management of his projects to the continent. In March, he accepted a professorship in applied high-performance computing at the University of Amsterdam in the Netherlands, which he holds in addition to his existing UCL roles. “It’s a Brexit mitigation strategy,” he says.

Some regions of the United Kingdom are particularly vulnerable to Brexit, and may struggle to adapt. Northern Ireland, for example, depends heavily on collaborations with partners from the Republic of Ireland, a separate country and EU member state.

“Sixty-three per cent of Horizon 2020 applications from researchers in Northern Ireland involved a partner from the republic,” says Gerry McKenna, who chairs the Royal Irish Academy’s North–South Committee, which is concerned with collaboration across the Irish border. “There’s no way that Brexit won’t have some negative impact on research collaboration.”

Amid these damage limitation efforts, Reid has been looking farther afield for ways to diversify the United Kingdom’s research collaborations. He and statistician, Adrian Smith, who leads the London-based Alan Turing Institute, have written a report for the UK government that outlines opportunities for international collaboration if the country decides not to associate with Horizon Europe.

Published on 5 November, the report suggests measures such as dedicated funding streams to enhance global collaboration, and new fellowships to attract talent to the United Kingdom. Reid hopes that the report will demonstrate that there are alternatives to traditional EU-focused collaborations.