"No one is immune": Alaska’s scientists despair over plan to shrink state universities

The University of Alaska’s governing board plans to consolidate campuses to cope with a 40% cut in state funding. 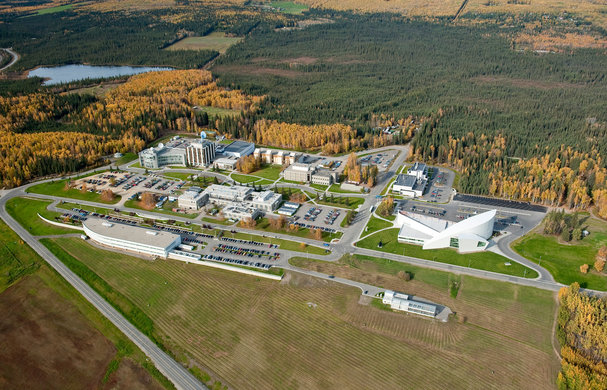 The University of Alaska Fairbanks is the flagship of the state's higher-education system.

Kat Milligan-Myhre, a microbiologist at the University of Alaska Anchorage, has simple advice for her current graduate students: get out as fast as you can.

Milligan-Myhre is one of roughly 1,300 academics whose jobs are at risk after Alaska Governor Mike Dunleavy slashed US$130 million from the University of Alaska (UA) system’s budget last month.

The state legislature has so far failed to override the cut, which amounts to roughly 40% of the state’s contribution to the university and will take effect this academic year.

Researchers are waiting anxiously to see how university administrators will apply the cuts, which could fundamentally reshape science in the state — including UA’s world-class Arctic and climate research programmes.

The first hint came on 30 July, when the university’s governing board voted to consolidate the system’s three main branches — in Anchorage, Fairbanks and Juneau.

“It’s awful,” says Milligan-Myhre. “I had to turn away a student planning on starting in the fall because I just don’t know what the department or his degree would look like in a year or two.”

She’s also encouraging her current students to graduate as soon as possible.

The university’s governing board has asked UA president Jim Johnsen to present a detailed merger proposal in September. It will start making cuts as soon as possible once a final plan is in place.

What is clear is that “no one is immune” from the budget pain, says Glenn Juday, a professor emeritus of ecology at the University of Alaska Fairbanks.

On 22 July, the UA governing board declared financial exigency, a sort of academic martial law that gives it emergency powers to lay off staff and faculty members — including tenured professors — and even to scrap entire campuses.

The massive but nebulous nature of the cuts makes planning for the future difficult across the university. “All the uncertainty is stressing me out a lot,” says Kelly Ireland, who is studying for a master’s degree in biological sciences at the University of Alaska Anchorage (UAA).

A grant from the US Department of Homeland Security will pay for her final year of research, but Ireland worries that her adviser — Milligan-Myhre — will be laid off before she graduates.

“I was thinking of applying to the PhD programme here, but I’m going to wait and see how this all shakes out,” Ireland says.

She is also worried that layoffs among the administrative staff, who shepherd grant applications through bureaucracy and keep departments running, will limit research at the university.

“Right after the legislature failed to override the governor’s cuts, I went into lab and prepped all the tubes I’d need to finish every single sample, which is literally 3,000 tubes,” she says.

“I’m worried that they might cut the person who orders all our tubes and equipment.”

Brandon Briggs, a geomicrobiologist at UAA, is also feeling the pressure. “All this uncertainty has definitely decreased productivity,” he says. “Instead of writing the next paper, I’ve been going to board meetings and trying to reassure students who’ve just been told their scholarships are gone.”

That’s because Dunleavy de-funded a scholarship programme for Alaskans attending UA. “As of July 1, 4,000 students got a letter notifying them that their scholarships will not be renewed this fall,” says Briggs.

The budget cuts have already altered some researchers’ plans. Milligan-Myhre, who studies a native Alaskan fish called the three-spined stickleback (Gasterosteus aculeatus), has dropped out of a “once in a lifetime” ecological experiment.

Dozens of researchers from across the globe plan to combine various stickleback populations in ten lakes that have previously been treated to kill all invasive fish.

The idea is to track how differences in the lakes’ ecosystems influence a host of traits in the fish — from the composition of their gut microbiomes to characteristics of their brain tissue — over decades, revealing evolution in action.

Milligan-Myhre is using the time she would have spent on the experiment to hunt for work.

“I just don’t have time to devote to this project because I’ve got to be writing my butt off the next few months,” she says. “I need to get as many papers out as I can to prep my CV for job applications, because I have no job security. [The university] can fire me with 60 days’ notice.”

The funding crisis also threatens some of UA’s flagship climate-research facilities, such as the International Arctic Research Center in Fairbanks or the nearby Bonanza Creek Long Term Ecological Research site.

Although the majority of their funding comes from outside sources, such as the US National Science Foundation, Juday says that a core level of institutional support holds the centres together.

“It’s like a bucket,” he says. “If you take away the bucket, then you can’t fill up the bucket” with grants from other funders.

These include efforts to improve weather forecasts in remote areas and to protect roads and other infrastructure from damage caused when permafrost thaws.

“A big part of our mission is making our research matter for Alaskans,” says Eicken. “These programmes provide tremendous value to the people of Alaska, and they’re under significant threat.”

And more cuts could be coming. Dunleavy, who was elected in November 2018 to a four-year term, has said that he plans to trim the state’s budget further in the coming years.

“This is just a terrible situation,” says Milligan-Myhre. “And it’s just going to continue.”