For the love of discovery, a biochemist freely shared the research which laid the groundwork for widely-used drugs. 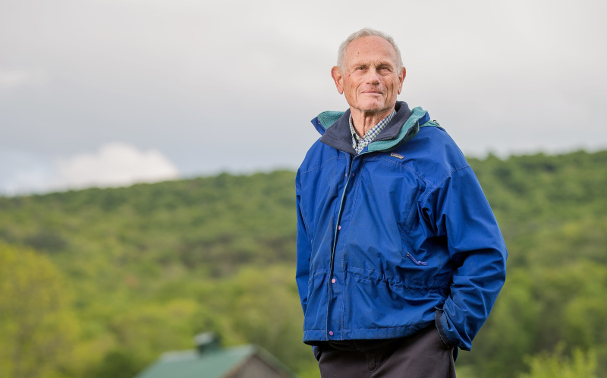 Michael Sporn sees science as a venture for social benefit and his open-access research results are still being built on.

But at the height of his career, in the 1970s and 1980s, Sporn was at the centre of a bustling research laboratory at the US National Institutes of Health (NIH) in Bethesda, Maryland, where his research group published a succession of papers. Their first major achievement was to show how derivatives of vitamin A, known as retinoids, could prevent and treat cancers of the bladder, breast, colon and other organs in rodent models. Later, they discovered transforming growth factor-ß (TGF-ß), a protein with an ability to either promote or inhibit cell growth depending on the molecular microenvironment.

“Our lab really cranked it out,” says Sporn. And the impact of his earlier work is substantial. Retinoid-based creams, gels and pills are now commonly used to treat acne and other skin conditions, while numerous drugs that target TGF-ß are in clinical development for patients with cancer, fibrosis and other diseases.

Yet, despite the lasting effect it has had on the drug industry, Sporn doesn’t stand to earn much from his pioneering work. During his time at the NIH he filed only a handful of patents, instead choosing to share his discoveries and research tools to promote general scientific advancement. “Mike had a genuine thirst for knowledge,” says Sharon Wahl, a former NIH colleague. “The last thing he’d be thinking about was patenting or money.”

To some extent, Sporn is a product of a bygone era, a time before patenting became paramount. As many of his peers began working with technology transfer offices to secure their intellectual property — after two pieces of US legislation in 1980 made it possible for US universities, NIH laboratories and others to own patents arising from federally funded research — Sporn continued to operate on an open-access model. His prodigious output exemplifies what Pierre Azoulay, an economist from the Massachusetts Institute of Technology in Cambridge, recently described as the “indirect” value of public spending on biomedical research.

Analysing NIH grants funded between 1980 and 2007, Azoulay and his colleagues found that less than 10% of NIH-backed research projects have led directly to a patent, but more than 30% have produced scientific papers that were later cited in commercial patents for drugs, devices or other medical technologies.

According to Azoulay’s data, more than half of the 400-plus papers Sporn published between 1959 and 2006 have been cited by at least one patent and his entire body of work has collectively been referenced thousands of times in the patent literature. However, Sporn only started filing patents himself after leaving the NIH in 1995 to start a lab at the [Dartmouth Geisel School of Medicine](Geisel School of Medicine, Dartmouth College) in Hanover, New Hampshire. And even then, it’s Dartmouth that stands to gain the most financially if the compounds Sporn developed there ever make it to market. (One such compound, known as a synthetic triterpenoid, is in final trials for treating pulmonary arterial hypertension as well as a kidney disease called Alport syndrome.)

“The notion of intellectual property was alien to me,” says Sporn, who trained in medicine but spent most of his career as a bench scientist. “Being a scientist meant sharing thoughts and ideas and aspirations with colleagues as part of this intellectual and societal venture.” But with pressure on academics to make money from research, “that world is gone”, he laments.

Sporn’s disinclination to patent his discoveries stems in part from the culture of the NIH in the 1980s. Nowadays, agency scientists file hundreds of patents every year, which “have translated into drugs and biologics with high public health impact,” says Karen Maurey, director of the Technology Transfer Center at the NIH’s National Cancer Institute. They also bring back more than US$100 million annually in royalties.

But before the NIH opened its technology transfer offices in the late 1980s, such activities were still rare. “The general feeling at that time was that patenting was something that got in the way of the free flow of reagents and information between labs,” says cancer researcher Lalage Wakefield, who joined Sporn’s lab in 1983 and has been at the NIH ever since. Sporn embodied this philosophy, Wakefield says, recalling how he would foist tubes of purified TGF-ß on anyone who professed the slightest interest in it. “Mike had this missionary zeal.”

Because of that evangelism, Wakefield adds, “the field just exploded.” And Sporn contends that “the ease with which we made this molecule available to everybody and anybody, no strings attached, contributed to that growth.”

Contemporary research examples support Sporn’s argument. For example, Tania Bubela and her colleagues at the University of Alberta in Edmonton, Canada, show that simplifying sharing agreements for mouse-related research tools can accelerate scientific progress. And a recent case-study of a drug candidate called JQ1 found that openly sharing the molecule with the research community led to more scientific and commercial activity, as measured by the greater number of related publications, citations and downstream patents than for equivalent anticancer drugs developed under usual systems.

“Open innovation is accelerating the rate of drug development,” says David Brindley, who studies healthcare innovation at the University of Oxford, UK, and led the JQ1 investigation.

Although Sporn eschewed patenting, he was open to commercial partnerships. He worked with Johnson & Johnson, Roche, BASF and other large companies to advance his investigations of retinoids. He and his close collaborator, Anita Roberts, also entered one of the first formal research partnerships between the NIH and a drug company, working with Rik Derynck’s team at Genentech to clone and sequence the gene that encodes TGF-ß.

The resulting paper, published in 1985, remains one of Sporn’s most cited — both by other academic papers, and by patents, including many of those that underpin promising experimental therapies in commercial development today. However, Sporn’s top cited paper in the patent literature, referenced at least 15-times more than any other, is a 1988 investigation of the structure and biological activity of TGF-a. It found that altering some amino acids had unexpected effects, showing for the first time “that the outcome of some mutations are not obvious”, says Eliane Lazar-Wesley, who led the study as a postdoc in Sporn’s lab. The paper is often cited to challenge claims of obviousness for drug targets of all kinds.

Using rat models, Sporn and Roberts also laid the scientific groundwork for administering TGF-ß to accelerate wound healing — an idea that several companies embraced. Genentech, for example, in the early 1990s tested topical and intravenous forms of TGF-ß in rats and rabbits with injuries to the flesh and bones. But the TGF-ß gel was never tested on people, despite a trial being “all set to go,” says Edward Amento, a research director at Genentech at the time. Genentech executives had decided to put resources elsewhere.

One TGF-ß product that did make it into — and on to — study volunteers was BetaKine, a form of the growth factor developed by Celtrix Pharmaceuticals and Genzyme. The companies ran trials in the 90s testing BetaKine in several ways: in a biodegradable sponge applied topically to diabetic foot ulcers; delivered through an injection to the eye for fixing macular holes and other ocular conditions; and as blood infusions for people with multiple sclerosis. Yet for various reasons, none of the trials panned out.

Sporn remains frustrated that business considerations, more so than clinical or scientific ones, scuppered his dream of seeing a therapeutic formulation of TGF-ß for wound repair. “I’d love to see TGF-ß on a Band-Aid,” he says. But with all the key patents long expired, he acknowledges that’s unlikely to happen. That doesn’t mean another kind of TGF-ß-related therapy won’t make it to market. Eli Lilly, Genzyme, Biogen and others all have drugs in clinical testing that block TGF-ß signalling in some way, either by inhibiting the growth factor itself or by targeting some other member of the TGF-ß superfamily, a group of related proteins all structurally similar to their familial namesake. They have Sporn and Roberts to thank for laying the groundwork for those drug development programmes. “Anti- TGF-ß is the big deal right now,” says Derynck, who left Genentech in 1991 and is now at the University of California, San Francisco.

John McPherson, a former Genzyme executive who collaborated with Sporn, is optimistic that one of these drugs will soon make it to market — and hopeful Sporn will see that happen.

Although Sporn hasn’t treated patients since his internship more than half a century ago, “he always wanted to see his scientific breakthroughs translated into medicines for patients,” McPherson says.