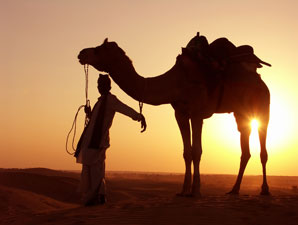 Discovering the chemical culprit behind the offensive odour of camel urine has provided valuable information for biochemists searching for better treatments for sleeping sickness.

African trypanosomiasis, or sleeping sickness, affects millions of people across 36 sub-Saharan countries. The illness is spread by the tsetse fly whose bite directly injects the parasite Trypanasoma brucei into a victim’s bloodstream.

Early symptoms of trypanosomiasis include itching, fever, joint pain and headache. In the second stage of the disease, the parasite crosses the blood-brain barrier and enters the central nervous system, causing severe behavioural changes, disrupted sleep, confusion and tremors. If not treated, trypanosomiasis is fatal.

Trypanosomiasis affects camels and other domesticated animals as the wasting disease, ‘nagana’, which has major economic consequences for Africa. Camel herders have traditionally diagnosed nagana from the rancid smell and reddish hue of the infected beast’s urine.

While studying the metabolism of T. brucei, Derek Nolan at Trinity College in Dublin and his team noticed what Nolan calls a “metabolic anomaly”. As the parasites multiplied in the blood after infection, so did the concentration of a chemical compound called indolepyruvate.

The team determined that indolepyruvate was a metabolic by-product released by the parasite as it broke down tryptophan, an amino acid taken from the host. It was thought that this metabolic activity, driven by the enzyme, cytoplasmic aspartate aminotransferase (ASAT), was redundant. Nolan’s team soon discovered that, by creating indolepyruvate, ASAT ensured the parasite’s survival.

Recalling the telltale effect of the putrid camel pee, Nolan and his team concluded that the foul smell must be caused by the oxidation of indolepyruvate as it is excreted from the sick animals. However, the direct function of this chemical in the persistence of the parasite was still unclear. Nolan and his colleagues studied indolepyruvate’s effect on the response of macrophages, blood cells that protect the host, and found that it powerfully and selectively supressed the inflammatory response of these important immune cells.

“During an infection, the number of parasites can exceed 100 million per millilitre of blood,” notes Nolan, “most of these parasites will be cleared by the host’s defences but the presence of indolepyruvate may serve to depress host inflammatory responses”.

In humans, T. brucei can therefore evade the immune response while keeping its host alive long enough to ensure its transmission by other biting flies. Understanding how the parasites beat our bodies’ natural defences is another step towards developing more effective treatments.

The next challenge for the team is to develop a drug that selectively inhibits the activity of ASAT. “If we can prevent this enzyme from working, then the parasite has a problem,” says Nolan “because ASAT activity is essential for the parasite to grow.”