The shape of things to come in drug design 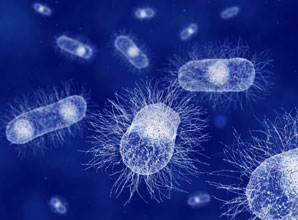 Lipoproteins are essential components of the outer cell membranes of bacteria and play vital roles in bacterial life. These complex structures made of proteins and lipids are synthesized by three enzymes in the inner cell membrane which scientists believe could be potential targets for antibiotic development. Now, an international team has described the structure of the final enzyme in the synthesis process, Lnt, a revelation which may guide the development of new antibiotics.

The team, led by Martin Caffrey of Ireland’s Trinity College Dublin, determined the structure of Lnt from the bacterial species Pseudomonas aeruginosa and Escherichia coli, both human pathogens. While the Lnt structures in the two species were extremely similar, Caffrey remarked that even very minor differences could potentially be exploited to develop species-specific antibiotics.

The structures described by the team revealed that Lnt is anchored to the cell’s inner membrane by eight cylinders and its active site, the part which carries out the reaction, sits outside the membrane. “It was unexpected to find the active site so far removed from the membrane, and that made us ask how substrates access it,” says Caffrey. “The answer came out of the structure itself, because we saw these outstretched arms that extend away from the active site and essentially provide a ramp from the plane of the membrane to the site.”

This layout is consistent with how Lnt is thought to work, a ‘ping-pong’ mechanism in which lipids and lipoprotiens line up for access to the active site, with the product of one reaction round leaving the active site before the next substrate enters. A mutated version of the protein which could not carry out the reaction made it possible for the team to directly visualize this queue. “We saw these corralled lipid molecules lined up perfectly for the active site of the protein,” recalls Caffrey.

Despite its detail, just knowing this structure is insufficient for guiding new drug design. Lipoproteins are recognized as ‘foreign ID cards’ by our immune system. Drugs designed to block Lnt’s interaction with lipoproteins might also affect our immune response. While the structure of the complex formed by immune proteins and lipoproteins is known, researchers don’t know what the Lnt-lipoprotein complex itself looks like. “If we can get those, and they are sufficiently different, which I expect they are, then we will be able to exploit that difference for a targeted, structure-based drug design that is selective and would ideally have no off-target effects,” says Caffrey.