The secret of life’s spark 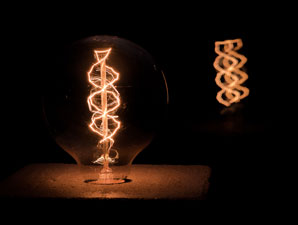 Piezoelectricity — the production of electricity in response to stress — has been observed in many biological materials, including bone, collagen, and DNA, but scientists still don’t fully understand why or how this happens. While advances in computational power and measurement tools helped researchers at the University of Limerick to tackle the issue, their breakthrough resulted from asking questions at the right level.

“Up until now, researchers have predominantly used tissue, which is a hierarchical structure, complex and highly variable. What we did was to look at a simpler level, at crystals of an amino acid, which is an easier structure to handle,” says Tofail Syed, one of the researchers leading the study. By looking at these “fundamental building blocks”, the team avoided the “physicist’s nightmare” of complexity and variation that obscures understanding of complex biological structures.

The team focused on two of the three crystalline forms of the amino acid glycine. Using density functional theory, a technique which approximates solutions to the Schrodinger equation, they predicted the piezoelectric properties of beta and gamma glycine. Based on the structure of beta glycine, they expected that it might be more piezoelectric than has been previously reported. Measurements of single crystals revealed that beta glycine generates ten times more voltage when stressed than currently used piezoelectric materials, while gamma glycine performed about as well as existing materials.

The exceptional piezoelectric performance of beta glycine is because the crystal’s molecules are densely packed together, but still able to move when stressed. As a result, the deformations caused by stress can separate charges in the crystal, generating electricity.

For Syed, the main value of this research is in validating the predictive computational approach they used. “We used quantum mechanical simulations to tell us what to expect,” says Syed. “This reduces the need for typical trial-and-error approaches.” Instead, researchers can predict which biological materials should have interesting piezoelectric properties and then explore them.

“Our work has opened the possibility of answering a lot of questions by doing experiments at the single crystal level and combining the blocks to build up complex structures to understand what’s happening in biological structures,” says Syed. “I believe this will make it possible to understand the foundation and relevance of piezoelectricity, which has been one of the holy grails in physiology.”