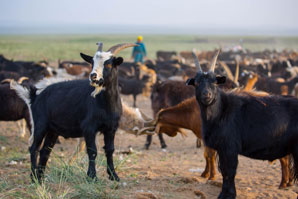 The first goat farmers created the best breeds for meat, milk and hides by breeding their beasts with wild herds.

Humans began domesticating animals more than 10,000 years ago, thereby ensuring a fixed source of food and furs, which supported the evolution of society. Since then, the careful art of animal husbandry has generated hundreds of different livestock breeds.

Goats were one of the first animals to be domesticated, according to evidence from the Fertile Crescent — a region spanning Europe, Asia and Africa where crop farming and animal herding began. However, there is some debate over how and where goat domestication occurred. In particular, it is not clear whether it was a singular, geographically isolated process, or if it arose multiple times as humans ventured out of the Fertile Crescent.

Now, a team led by Dan Bradley at Trinity College Dublin has sequenced genomes from ancient goat bones, collected at numerous sites across the Fertile Crescent, from the Balkans to Turkmenistan, that range from hundreds to thousands of years old.

“Just like humans, modern goat ancestry is a tangled web of different ancestral strands,” says Bradley. “The only way to unravel these and reach reliably into the past is to sequence genomes from actual ancient animals; a kind of molecular time travel.”

His team completed the genomes of 83 individual goats, in order to analyse genetic diversity within and between different populations and compare them to modern and ancient goats from around the world.

The team discovered a surprising amount of genetic variation between ancient goats in the Fertile Crescent and the surrounding regions. This suggests that domestication occurred at multiple locations through the continuous and highly selective breeding with local wild populations, as well as between existing domesticated herds.

The researchers identified several genetic traits that had been repeatedly introduced as goat farmers tried to control the size, reproductive capacity and milk production of their herd. And the distinct genetic characteristics that evolved through this process were also visible in modern goats of Asia, Europe and Africa.

The researchers were surprised to find that appearance was important in those early days, revealing a prehistoric preference for pelt colours. “We found evidence that at least as far back as 8,000 years ago herders were interested in or valued the coat colour of their animals, based on selection signals at pigmentation genes,” says Kevin Daly from Trinity College Dublin.

This study provides evidence that humans have been tweaking the genomes of domesticated animals for thousands of years. In addition, the dispersed pattern of domestication supports existing theories that humans took a range of routes out of the Fertile Crescent.