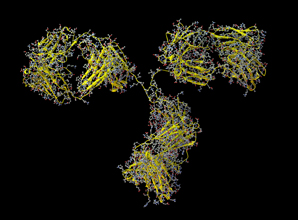 The extent to which large stretches of a tumour cell’s DNA are duplicated or deleted may help doctors identify which colorectal cancer patients are good candidates for treatment with bevacizumab, a best-selling drug that chokes the blood supply to tumours.

Nowadays, many oncologists routinely prescribe bevacizumab alongside chemotherapy for advanced cases of this common and deadly cancer, even though the drug, which is marketed as Avastin, works just for a minority of patients.

A genetic test that predicts which patients would benefit from the drug could help spare others needless exposure to the bevacizumab’s powerful, and toxic, effects, which include complications such as bleeding episodes, arterial clotting events, elevated blood pressure and defective wound healing.

Furthermore, a test for alterations in DNA copy numbers — a genomic situation called ‘chromosomal instability’ — could help lower healthcare expenses in places that already use the life-extending therapy to treat colorectal cancer. And it could expand patient access in countries that have restricted the use of bevacizumab, citing the drug’s lack of cost effectiveness when offered across the board to those with metastatic colorectal cancer.

Genetic profiling of colorectal tumours is “now poised to impact clinical treatment paradigms,” Annette Byrne of the Royal College of Surgeons in Ireland told attendees of the 2018 International Conference on Gastro Education. Her team’s findings, she noted, show that “chromosomal instability represents a novel biomarker for bevacizumab response.”

Byrne is the project coordinator of ANGIOPREDICT, a European initiative geared at personalizing the use of bevacizumab among colorectal cancer patients. Members of that research consortium had previously shown that tumours lacking a large chunk of chromosome 18 were particularly sensitive to bevacizumab treatment. It now seems that specific loss of DNA seems to be just one example of a much larger genomic phenomenon.

Byrne and her colleagues analysed the DNA of archived tumour samples from more than 400 individuals with colorectal cancer. They concluded that patients with intermediate-to-high levels of chromosomal instability in their tumours responded favourably to the combination of bevacizumab plus chemotherapy, whereas patients with low-instability tumours derived no further benefit from the addition of bevacizumab to standard treatment. The researchers also confirmed the findings in mouse models.

Looking ahead, Byrne noted that there’s already a movement among colorectal cancer experts to reclassify the disease into subtypes according to genomic profiles. Within that framework, she said, genetic testing should become more routine and the personalization of bevacizumab-related treatment decisions should follow.