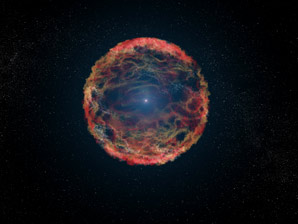 A simulation of a supernova undergoing a core-collapse explosion provides support for an explosion mechanism in which elementary particles known as neutrinos play a big role.

Core-collapse supernovae are the death throes of massive stars, and they give birth to neutron stars or black holes. A proto-neutron star forms at the center of the explosion. Despite stars being spherical, the proto-neutron star receives a ‘kick’ in one direction. The ‘foot’ behind this kick has been keenly debated by astrophysicists.

Now, a team led by a researcher at Waseda University in Japan has performed a simulation of a core-collapse supernova that includes neutrino motion and proper motions of the proto-neutron star. They found that asymmetry associated with neutrinos may play a role in generating the neutron star kick, although further work is needed to firmly establish this.