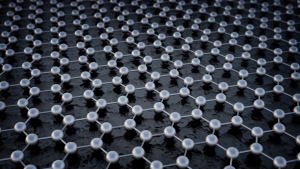 Graphene's hexagonal lattice of carbon atoms can absorb laser light like a sponge and then release it in bursts lasting just a fraction of a nanosecond.

Graphene, hailed as one of the thinnest, strongest and most conductive materials ever found, seems to have bagged one more amazing property. Experiments suggest that it can be used to create ultrashort laser pulses of any colour, owing to an ability to absorb light over a broad range of wavelengths.

The discovery could help researchers to build small, cheap and highly versatile ultrashort-pulse lasers, with potential applications ranging from micro-machinery to medicine.

Conventional ultrashort-pulse lasers use a material that absorbs light like a sponge and then releases it back in quick bursts, typically lasting for femtoseconds (one femtosecond is 10−15 seconds, or one millionth of a billionth of a second). These 'saturable absorbers' function only at specific wavelengths, says Roy Taylor, a physicist at Imperial College London. Applications such as monitoring pollutants in the atmosphere need to use multiple wavelengths to detect a range of molecules, so several separate lasers are required.

In 2009, physicist Andrea Ferrari of the University of Cambridge, UK, and his collaborators first showed that graphene —  a one-atom-thick sheet of carbon, with the atoms arranged in hexagons like chicken wire — can act as a light sponge in the infrared spectrum1. More recently, Taylor, Ferrari and colleagues from the United Kingdom and Switzerland have coaxed the material to produce pulses of infrared radiation lasting tens of femtoseconds2, 3.

Now, the researchers have improved their device to produce a broad spectrum of infrared wavelengths, which are useful in applications such as fibre optic communications. Moreover, their results, together with the known properties of graphene, suggest that the material should be able to yield similar ultrashort pulses over the entire spectrum of visible light as well, says Ferrari. The team's latest results will be reported at the Conference on Lasers and Electro-Optics in San Jose, California, in June.

Graphene’s ability to absorb light of any colour comes from the peculiar structure of the energy levels of its electrons. In a typical solid non-metal material, electrons can exist in a low-energy state, in which they are bound to atoms, or in a higher-energy state, where they are able to move around and carry an electric current. Between these two states is a 'band gap', which requires a certain energy to be bridged. An electron can cross the band gap if the material absorbs light with that particular energy — which means a particular wavelength. In the semiconductor materials used to make transistors in computer chips, electrons jumping over the band gap switch the current from 'off' to 'on'.

In graphene, by contrast, there is no band gap, and the electrons' energy can vary along a continuum. That makes single-sheet graphene useless in transistors, says Byung Hee Hong, a physicist at Seoul National University, but it gives the material an advantage in optics, enabling it to absorb a wide range of wavelengths of light.

“Usually, different materials are needed for different wavelengths, and there are not many [conventional] materials that can be used for the near-infrared region,” says Hong, who was not involved in the new study.

Graphene is also chemically and mechanically stable enough to prevent thermal damage by intense laser beams, Hong adds. And a major advantage of graphene-based ultrashort-pulse lasers is that these devices can be as small as a pencil, making them versatile and easy to use.