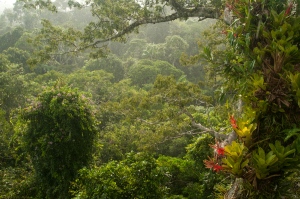 Trees in rainforests, such as these in the Ecuadorian Amazon, might end up absorbing as much carbon as they release because of global warming.

Tropical forests are unlikely to die off as a result of the predicted rise in atmospheric greenhouse gases this century, a new study finds. The analysis refutes previous work that predicted the catastrophic loss of the Amazon rainforest as one of the more startling potential outcomes of climate change.

In the most extensive study of its kind1, an international team of scientists simulated the effect of business-as-usual emissions on the amounts of carbon locked up in tropical forests across Amazonia, Central America, Asia and Africa through to 2100. They compared the results from 22 different global climate models teamed with various models of land-surface processes. In all but one simulation, rainforests across the three regions retained their carbon stocks even as atmospheric carbon dioxide concentration increased throughout the century.

The study provides “robust evidence for the resilience of tropical rainforests”, says lead author Chris Huntingford, a climate modeller at the UK’s Centre for Ecology and Hydrology in Wallingford. But uncertainties remain, he adds.

For one, it remains difficult to predict how climate will change regionally. Moreover, each global climate model represents climate somewhat differently.

The single simulation that predicted biomass loss for the Amazonian and Central American rainforests in the current study used a model called HadCM3, developed by the UK Met Office's Hadley Centre in Exeter. That same model produced the earlier prediction that climate change would lead to massive forest die-off in the Amazon2.

Climate scientist Peter Cox at the University of Exeter, UK, was one of the authors on the earlier study and is also involved in the new one. He explains that, unlike other climate models, HadCM3 predicts extreme drying over the Amazon basin in the future, which changes the outcome for the forests there. But in the light of new data and of improved modelling, the drying now seems a lot less probable. Scientists are more confident in the predictions from current studies, he says, as they are based on many more, and much more sophisticated, models.

“This has been a big issue in science for many years,” says forest ecologist Daniel Nepstad, who directs the Amazon Environmental Research Institute in San Francisco, “and the emerging view is that there is less sensitivity in tropical forests for climate-driven dieback”.

But Cox points out that much uncertainty still exists in how forests will respond to changes in climate. In another paper3, some of the same authors have shown that warming alone could have a massive impact on tropical forests; for every 1 °C rise in temperature, around 50 billion tonnes of carbon would be released from the tropics.

The fertilizing effect of carbon dioxide, which boosts plant growth, counteracts the release completely if it is as large as suggested by the models used in the new study. What scientists don’t yet know if whether that assumption holds up.

That tropical forests will retain their carbon stocks long term gives a major boost to policies aimed at keeping forests intact, such as the United Nations' REDD programme on reducing emissions from deforestation and forest degradation.

But, warns Nepstad, there may be more immediate threats to forests in the next 20 to 30 years from extreme weather events. And those events will only become more common in a warming world.