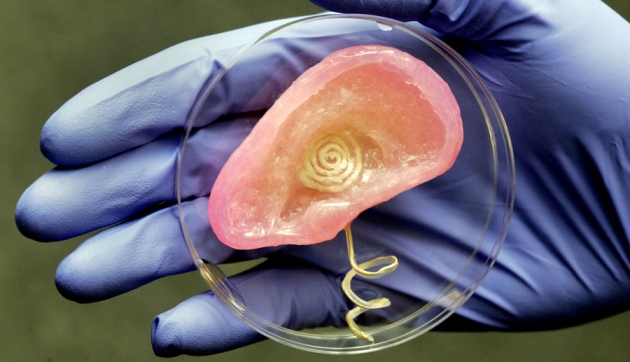 The increasing sophistication of 3D printing is shown in an ear that melds biological and electronic parts.

The advent of three-dimensional (3D) printing has generated a swell of interest in artificial organs meant to replace, or even enhance, human machinery.

Printed organs, such as a proto­type outer ear developed by researchers at Princeton University in New Jersey and Johns Hopkins University in Baltimore, Maryland, will be on the agenda at the Inside 3D Printing conference in New York on 15–17 April. The ear is printed from a range of materials: a hydrogel to form an ear-shaped scaffold, cells that will grow to form cartilage, and silver nanoparticles to form an antenna (M. S. Mannoor et al. Nano Lett. 13, 2634−2639; 2013). The device is just one example of the increasing versatility of 3D printing.

The New York meeting, which bills itself as the largest event in the industry, will have plenty of widgets and novelties on display. But it will also feature serious discussions on the emerging market for printed body parts (see gallery for some of the latest results).

That business is currently focused on titanium replacement hip joints, which can be tailored to fit individual people, and made-to-order polymer bones to reconstruct damaged skulls and fingers. Printed body parts brought in US$537 million last year, up about 30% on the previous year, says Terry Wohlers, president of Wohlers Associates, a business consultancy firm in Fort Collins, Colorado, that specializes in 3D printing.

Scientists are looking ahead to radical emerging technologies that use live cells as ‘ink’, assembling them layer-by-layer into rudimentary tissues, says Jennifer Lewis, a bioengineer at Harvard University in Cambridge, Massachusetts. Bioprinting firm Organovo of San Diego, California, already sells such tissues to researchers aiming to test experimental drugs for toxicity to liver cells. The company’s next step will be to provide printed tissue patches to repair damaged livers in humans, says Organovo’s chief executive, Keith Murphy.

Lewis hesitates to say that 3D printing will ever yield whole organs to relieve the shortage of kidneys and livers available for transplant. “I would love for that to be true,” she says. “But these are highly complicated architectures.”