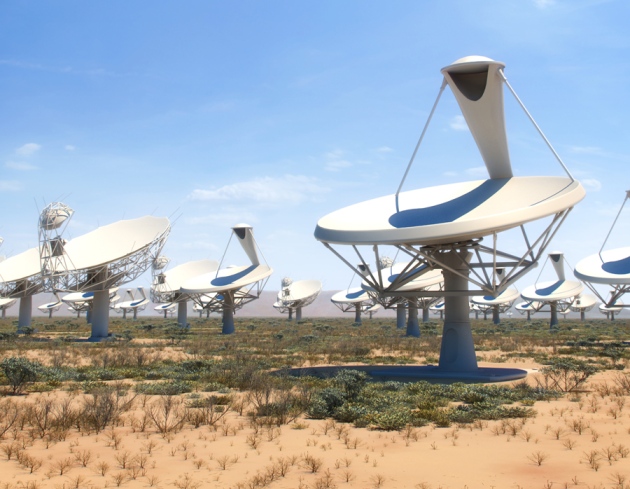 Scientists are predicting an astronomy renaissance on the African continent in coming years, thanks in part to a giant radio telescope array being built there. But the road to cosmic cachet is not an easy one, and African science advocates are scrambling to take full advantage of the opportunities coming their way.

"Astronomy really is about to explode across the African continent," astronomer Kartik Sheth of the US National Radio Astronomy Observatory said January 9 at the 223rd meeting of the American Astronomical Society near Washington DC The challenge, he said, is to make sure African astronomers benefit from the surge of facilities being built in their midst. "We want to build long-term sustainable collaborations that are mutually beneficial to the US and to Africa. We don’t want brain and data drain from Africa to the US."

The biggest game-changer on the continent will be the Square Kilometer Array (SKA), the world's largest network of radio telescopes designed to survey the sky faster than any instrument before it. Roughly 3,000 radio dishes — having a combined total surface equal to a light-collecting area of about a square kilometer — will be spread across vast distances to offer a resolution akin to a single dish encompassing the whole span. "SKA will be the premier project of the coming decades, completely revolutionizing radio astronomy," said Ted Williams, director of the South African Astronomical Observatory. "The largest part of the SKA will be sited in Africa, and it's continent-wide, extending across eight African countries:" Botswana, Ghana, Madagascar, Mauritius, Mozambique, Namibia, South Africa and Zambia. A smaller portion of the project will be built in Australia.

South Africa, headquarters for the African contingent of the project, mounted a competitive campaign to bring the observatory to Africa, and the news in 2012 that its bid had won the lion's share of the project was unexpected to many. "We kind of took them by surprise but we did our homework very well," says Takalani Nemaungani, an engineer at South Africa's Department of Science and Technology who led his country's SKA lobbying campaign. Nemaungani sold the SKA committee on South Africa's clear skies (necessary for precision radio astronomy), the promised political support of its president and cabinet — who have passed legislation to strictly limit the amount of radio noise in the remote site area — and its expertise in engineering and infrastructure. Construction of the $1.6-billion observatory is due to begin in 2016 and will be added to in phases, with the first observations to take place in 2019 and full operation by 2024.

South Africa's apartheid past posed a special challenge. Until the race-separation policy ended in 1994 the country faced local unrest and international opprobrium. Trade sanctions imposed on South Africa by other countries, especially the US, hampered the nation's economy but resulted in some unintended consequences in boosting homegrown technologies. "Because of the embargoes and sanctions here, there were technologies and expertise we had to build for ourselves to sustain the country," Nemaungani says. For example, the international oil embargo against South Africa enacted in 1987 forced the nation to become the world leader in technology to convert coal to oil.

Still, Africa's goal of astronomical ascendancy faces serious challenges, including many African countries' high levels of unemployment, poverty, poor education and lack of investment in science. According the UNESCO 2010 Science Report, scientific development in sub-Saharan Africa faces "poor infrastructure development, a small pool of researchers and minimal scientific output. The continent has failed to invest in science, technology and innovation (STI) as drivers of economic growth and long-term sustainable development."

Proponents of Africa’s new age of astronomy want to change all that. "SKA is helping us to change perspectives on Africa as a destination for high-tech opportunities and industry," Nemaungani says. "We're using astronomy as a gateway science to interest young kids to study math and science. That's where a big project like SKA can make an impact."

Virtually everywhere in South Africa people have heard about the SKA, although they might not know much about it, Williams said. Leaders are particularly working to help South Africa's black population reap the new scientific opportunities, which have traditionally gone to the nation's privileged whites. "Several generations of Africans were told, 'You can't do this,'" he told Scientific American. "The message we're trying to send is, 'Yes, you can.'"

And the SKA is just one of numerous astronomical projects on the continent. The High Energy Stereoscopic System (HESS) gamma-ray observatory opened in 2002 in Namibia, new telescopes are being built in Burkina Faso and Ethiopia, and the Southern African Large Telescope (SALT) was inaugurated in South Africa in 2005 and came fully online in 2011.

Ted Williams was a Rutgers University astronomer in 1998 when he first came to South Africa to investigate the possibility of building SALT. His wife insisted on coming on the trip because it was a "once-in-a-lifetime" opportunity to visit. It was not long, though, before the two moved to Cape Town. In his time there Williams has seen significant technological, scientific and social advancement. "When we started on SALT, nobody could have conceived that a project like SKA would go to South Africa," Williams says. "So much has changed."