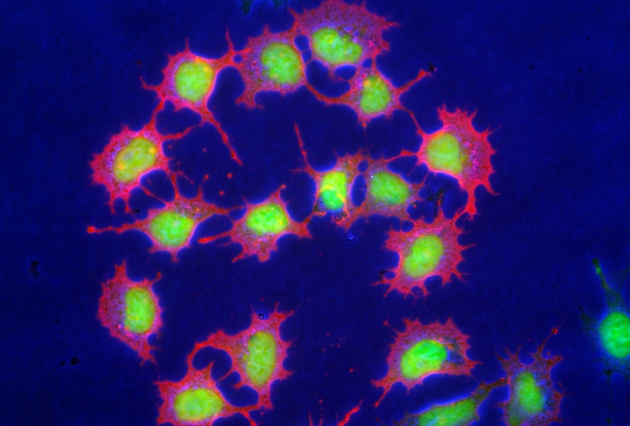 A newly found type of stem cell could be easier to grow in the lab than embryonic stem cells (shown here).

A newly discovered type of stem cell could help provide a model for early human development — and, eventually, allow human organs to be grown in large animals such as pigs or cows for research or therapeutic purposes.

Juan Carlos Izpisua Belmonte, a developmental biologist at the Salk Institute for Biological Studies in La Jolla, California, and his colleagues stumbled across a previously unknown variety of pluripotent cell — which can give rise to any type of tissue — while attempting to graft human pluripotent stem cells into mouse embryos.

Scientists previously knew about two other types of pluripotent stem cells, but growing them in large numbers or guiding them to mature into specific types of adult cells has proven difficult. Writing in Nature1, Izpisua Belmonte and his colleagues report a type of pluripotent cell that is easier to grow in vitro and grafts into an embryo when injected into the right spot. They call them region-selective pluripotent stem cells (rsPSCs).

Because the region-selective cells grow more quickly and stably than other pluripotent cells, they may be more useful for developing new therapies, says Paul Tesar, a developmental biologist at Case Western Reserve University in Cleveland, Ohio.

Izpisua Belmonte and colleagues sought to transplant known types of human pluripotent cell into mouse embryos in vitro. They prepared these cells by growing them in media containing different combinations of growth factors and chemicals. One blend was more effective at making the cells grow and proliferate. The cells that thrived in this solution were found to display different patterns of metabolism and gene expression from other pluripotent stem cells — but they did not graft well into the mouse embryo.

To pinpoint the factors that could be holding back this integration, the researchers injected the human cells into three different regions of a 7.5-day-old mouse embryo. Thirty-six hours later, only the cells that were grafted into the tail, or posterior of the embryo, integrated and differentiated into the correct cell layers, forming a chimaeric embryo — an organism with DNA of different origins. Because these cells seemed to prefer one part of the embryo, the researchers dubbed them region-selective.

Izpisua Belmonte suspects that embryos contain multiple types of pluripotent stem cells, including rsPSCs, during their early development. It is not yet clear whether the rsPSCs play a part in designating which part of the embryo will become the head or hind end. Identifying various types of pluripotent cells could allow researchers to study the early stages of human embryonic development by transplanting the stem cells into animal embryos.

Izpisua Belmonte and his colleagues found that they could easily use DNA-cutting enzymes to edit the genomes of the region-selective stem cells, which is usually hard to do in pluripotent cells grown in vitro.

Gene editing could help scientists to optimize human cells’ ability to grow within another species, allowing the creation of transgenic chimaeras. Tesar says that the idea of using human pluripotent cells, such as rsPSCs, to create animals with human organs is not unrealistic, but he expects that it will be very difficult. For instance, it is unknown whether an animal’s developing immune system would recognize the human organ as part of the animal, or attack it. The signalling molecules that drive organ formation may differ between animals and humans, and a human organ might develop at a different rate from an animal organ.

Izpisua Belmonte acknowledges these concerns, adding that there may be ethical questions about creating viable human–animal hybrids. Although he says that his lab is already starting to implant pig embryos with a different type of stem cells, he says that the technique is only the very first step.