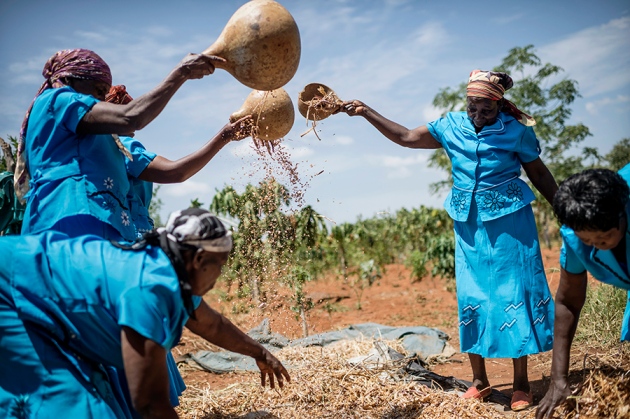 An ecosystem’s ability to support crops is affected by the bacteria and fungi in the soil.

One thousand ziplocked bags of soil from ten countries will form the basis of the first large-scale survey of the microbial life hidden underground in sub-Saharan Africa. The leaders of the African soil microbiology project hope that the data will one day help to drive better agricultural practices and to protect ecosystems and crops in the face of climate change.

“Soils are critical and soil health is vital for human and animal livelihoods,” says Don Cowan, director of the Centre for Microbial Ecology and Genomics at the University of Pretoria in South Africa. He launched the project on 8 October at the consortium’s first meeting in Pretoria.

Researchers increasingly recognize the importance of soil microbes to ecology and agriculture. Some bacteria and fungi colonize plant roots, promoting the plant’s growth. A diverse population of soil microbes helps to regulate an ecosystem’s climate, and maintains the fertility of the soil and its ability to support crops. And biotechnology companies including Monsanto are testing additives that contain soil microbes for their ability to improve agricultural productivity.

Yet the diversity and sheer number of soil microbes — as well as the extent to which populations vary across the planet — is not well understood, says microbial ecologist Noah Fierer, who researches microbes in diverse environments at the University of Colorado at Boulder. A 2014 study of Central Park in New York revealed that the majority of its soil microbes were new to science. “We know surprisingly little about the soil microbiome,” says Fierer.

This is particularly true for sub-Saharan Africa. South Africa, a scientific leader in the region, has a long history of soil science, but until now, its researchers have focused on soil chemistry rather than soil microbes. An understanding of the soil microbiome and its effect on crops is especially relevant now because microbial communities are expected to be affected by climate change.

“We know surprisingly little about the soil microbiome.”

The goal of the three-year initiative is to create a broad survey of soil chemistry and microbiology across a range of regions and climates.Its researchers, led by Cowan, will use climate, topography and geology to choose 1,000 sample locations most likely to capture the maximum diversity. At each point, scientists will record data about the area, including temperature and altitude, and take photos of the site as well as digging the samples, which they will send back to Cowan’s lab in South Africa. Each country is responsible for its own sample collection using a standardized method.

Cowan’s team, in collaboration with researchers sent from partner countries, will extract the DNA from the samples — and amplify and sequence sections containing specific DNA tags that mark them out as bacteria. The researchers expect to find unknown bacterial genomes as well as known ones. In the project’s next phase, they will look at soil fungi.

There are practical challenges ahead. Zimbabwe is under US sanctions and not eligible for USAID support, so Cowan must find alternative funding to undertake sampling there. And the project may run up against anti-biopiracy legislation, which restricts the movement of samples across borders. “If it proves to be impossible to get all the appropriate permits from partner nations, we’ll just have to leave them out,” says Cowan.

The project “represents a key step to charting the diversity of the soil microbiome and mapping the hidden biodiversity found below ground”, says Fierer. Although valuable for creating a baseline for further studies, these kinds of data can provide only a superficial understanding of the microbiome, notes plant molecular biologist Simona Radutoiu at Aarhus University in Denmark. Her work involves in-depth studies of how soil bacteria interact with plants, which is necessary to understand the role of microbes in plant health. “This is a very good initiative,” she says, “but is a start and should be continued, improved and sustained.”

“The resolution is not great,” acknowledges Cowan, “but the novelty is enormous.” He adds: “We don’t have the resources to do the coverage and analyses that would take the project to a more sophisticated level.”

He hopes that the project will develop as more African scientists are trained to perform microbiome analyses, allowing more samples to be taken and a higher resolution of sampling. “We know our partners are struggling to build cutting-edge labs,” he says. “We can’t help them build their laboratories, but we can bring students here to train them in the practicalities.”