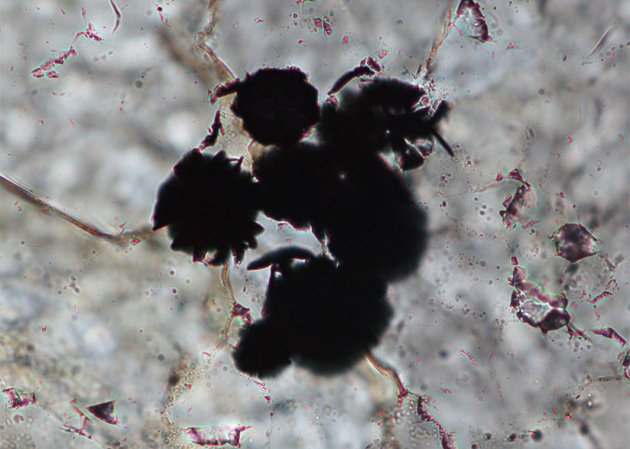 The microscope view shows dark grains of graphite that could contain traces of ancient life on Earth.

Ancient rocks in northeastern Canada could contain chemical traces of life from more than 3.95 billion years ago, a new study suggests1. If confirmed, the finding would be among the earliest known signs of life on Earth.

To some, the work adds to growing evidence that the young Earth was teeming with many different kinds of organism. “Accept it!” says Dominic Papineau, a geochemist at University College London who, in March, co-authored a report of possible fossilized microbes from Quebec that date back at least 3.77 billion years2.

But others are sceptical that the latest work will hold up to scrutiny. Many previous claims of ancient life have been hotly contested — in part because rocks that formed billions of years ago have been severely heated and squished, making the geological context hard to interpret, and in part because the chemical traces of life can be difficult to distinguish from reactions that do not involve living organisms.

“When I read this I thought, ‘here we go again,’” says Martin Whitehouse, a geologist at the Swedish Museum of Natural History in Stockholm who, in 2002, co-authored a study3 that criticized a similar report of ancient life in Greenland.

The latest work investigated a set of rocks from northern Labrador, known collectively as the Saglek block. A team led by Tsuyoshi Komiya and Yuji Sano of the University of Tokyo visited the area between 2011 and 2013, fanning out among the rocky outcrops to gather samples while armed guards kept watch for polar bears.

In the 28 September issue of Nature, the researchers report analysing carbon isotopes in powdered rock and in individual graphite grains from the Saglek area. In some of the samples, they found relatively low amounts of the isotope carbon-13 compared to carbon-12, a lighter isotope with one less neutron in its nucleus. Organisms prefer to use carbon-12 to make organic compounds, and so material in which microbes once lived — like the Saglek rocks — becomes enriched in the lighter isotope.

Finding evidence of life in these ancient, highly deformed rocks “is surprising and exciting”, says Komiya. He says that he and his group have ruled out other possible explanations for the skewed ratio of carbon isotopes, such as decomposition of the mineral siderite. And the graphite seems to have crystallized at roughly the same temperature as that experienced by the rocks around it as they were squeezed and heated, which suggests the graphite isn’t just contamination that arrived later. 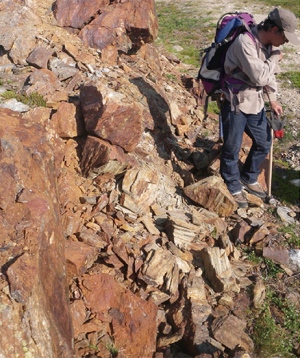 Researchers sampled rocks from an area in Labrador, Canada, called the Saglek block.

In previous papers4, 5, Komiya’s team described the geological history of the Saglek block, and used uranium–lead dating on ancient zircon crystals inside a type of metamorphic rock called gneiss to conclude that the gneiss was 3.95 billion years old. They say that the graphite containing hints of life must be at least that old, because it lies within rocks that are apparently shot through with — and thus presumably older than — the 3.95-billion-year-old gneiss.

Yet that scenario prompts other scientists to raise a warning flag. “The graphite is in much younger sediment than the authors claim,” say geologists Monika Kusiak of the Institute of Geological Sciences at the Polish Academy of Sciences in Warsaw and Daniel Dunkley of Curtin University in Perth, Australia, who have been working to unravel the geological history of the Saglek block. They argue that the rocks that are supposedly shot through with the gneiss are not, in fact, older than it.

Komiya says that he stands by his team’s interpretation.

The debate over the results resembles one that began in 1996, when a US–Australian–British team reported finding biologically altered graphite from at least 3.86 billion years ago inside grains of a mineral called apatite, in rocks on Akilia island off southwestern Greenland6. That work was criticized on many fronts7, although some still argue that Akilia's rocks contain traces of ancient life.

Labrador’s ancient rocks, including the Saglek block, lie directly across the Labrador Sea from Greenland. “There are a lot of similarities,” says Minik Rosing, a geologist at the Natural History Museum of Denmark in Copenhagen who has studied possible chemical traces of life in Greenland rocks8. “It's extremely complex geology.”

He applauds Komiya's team, but says that more remains to be done. “It's a good example of very sophisticated and high-quality analytical work,” he says. But the rocks are so complicated, he explains, that the graphite being studied “could be as young as 2.7 billion years old, and still pass all the tests”.