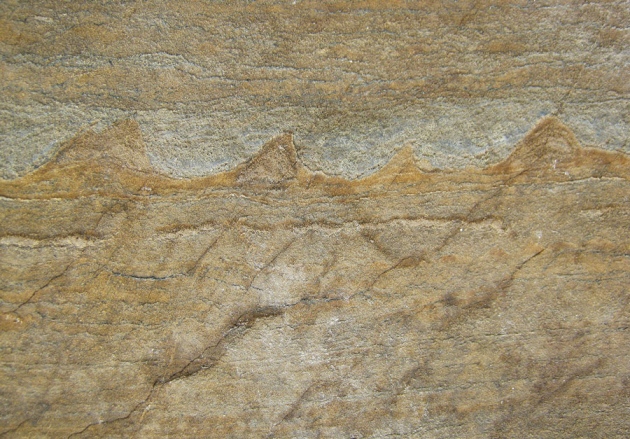 The bumpy layers in this rock could be signs of early life.

Geologists say that they have unearthed some of the oldest known evidence for life on Earth. The discovery, yet to be confirmed, suggests that life arose quickly on the young planet.

In this week's Nature, Australian and British researchers report finding layered structures called stromatolites in 3.7-billion-year-old rocks from Greenland1. Stromatolites, which look a bit like geological cauliflowers, form when microbes trap sediment and build up layer after dome-shaped layer.

But the discovery involves some of the most physically tortured rocks on Earth, which have been squeezed and heated over billions of years as crustal plates shifted. The pressure and heat recrystallizes the rocks, erasing much of the fine-scale detail that researchers normally use to identify fossilized stromatolites — so the work is already triggering heated debate.

“I’ve got 14 queries and problems that need addressing before I’ll believe it,” says Roger Buick, a geobiologist at the University of Washington in Seattle.

The rocks hail from Isua, Greenland, where researchers have laboured to tease out potential signs of life dating back billions of years. Previous work on the rocks’ chemistry, such as a 1999 paper analysing carbon isotopes2, suggested that they contain ‘biomarker’ traces of early organisms. But various claims over the years have remained contentious.

Now, melting snow has revealed new clues. A team led by Allen Nutman, a geologist at the University of Wollongong in Australia, visited a rock outcrop that had been buried under a perennial snow patch until warmer temperatures melted it away. They sawed out a chunk of 3.7-billion-year-old rock and took it back to Australia to study.

In it they found the purported stromatolites, along with other clues to ancient life. “It’s a combination of different types of evidence that makes the story so compelling,” says team member Martin Van Kranendonk, a geologist at the University of New South Wales in Kensington, Australia.

The structures are tiny bumps, just 1–4 centimetres tall, whose shape and internal layering strongly resemble ancient and modern stromatolites, Van Kranendonk and his colleagues say. The texture of the surrounding rocks suggests that they were laid down at the bottom of a shallow sea, much as stromatolites are today in places such as the Bahamas and western Australia. And the rocks contain carbonate minerals such as dolomite, which are also common in younger stromatolites.

The Greenland structures are about 220 million years older than the oldest widely accepted evidence for life, a set of stromatolites from the Pilbara region of western Australia3. “The evidence is a whole lot thinner than the rocks in Australia,” says Abigail Allwood, an astrobiologist at NASA’s Jet Propulsion Laboratory in Pasadena, California. “Having said that, it’s incredible that anything can be found in these rocks that are barely a ghost of what they were before. That’s why it’s worthy of attention.”

Part of the problem with studying ancient stromatolites is that layered structures can form through processes that have nothing to do with life. Minerals precipitating out on the seafloor can leave layers, like rings on a bathtub, that look like stromatolites but aren't4.

“At most, these structures should be classified as pseudostromatolites,” says Kathleen Grey, a consulting palaeontologist in Perth, Australia, who has worked on ancient stromatolites. “Sadly, I don’t feel the evidence is convincing for such an important claim.”

Tanja Bosak, a geobiologist at the Massachusetts Institute of Technology in Cambridge, adds that she would like to see whether the proposed stromatolites have small amounts of organic matter in or near them. Comparing different types of carbon in the rock could help to reveal whether the structures are biological or not.

At a minimum, Allwood notes, the Greenland rocks should help astrobiologists as they prepare for the first ever samples to be returned from Mars, from a NASA mission slated to launch in 2020. The newly reported stromatolites may serve as a test case for scientists to argue about what constitutes convincing evidence of past life.

“If we found something like this on Mars would we stick a flag in it and call it life?” she asks. “I don’t think we would.”