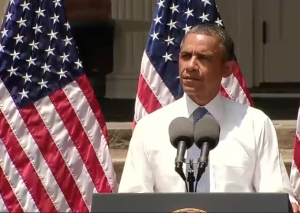 Obama unveiled the wide-ranging climate change plan in a speech at Georgetown University in Washington DC, pledging to "put an end to the limitless dumping of carbon pollution from our power plants."

The US Environmental Protection Agency (EPA) will work with states, industry and other stakeholders on a power-plant rule that will promote a "common-sense, timely transition to a clean-energy economy", White House officials told reporters on Monday. But the administration, which aims to introduce the proposal by next June and finalize it by June 2015, is not committing to specific emissions reductions.

Existing power plants account for roughly 40% of US greenhouse gas emissions, and the potential for emissions reductions is huge: a proposal put forth by the Natural Resources Defense Council, an environmental group based in New York, would cut the power sector's greenhouse gas output to 26% below 2005 levels by 2020. That plan relies on setting up a complex regulatory framework that gives power companies flexibility to reduce emissions through things like mechanical upgrades or even consumer energy efficiency programs.

But some legal experts say the Clean Air Act was not designed to regulate a ubiquitous pollutant like carbon dioxide. There is a risk that an aggressive policy to stem emissions would be vulnerable to a legal challenge, says Jeff Holmstead, an attorney with the Washington DC firm Bracewell and Giuliani who served at the EPA under President George W. Bush. On the other hand, Holmstead says the administration could stick with a relatively straightforward, safer rule that requires basic equipment upgrades across the industry, but such an approach would only reduce emissions by much less – perhaps a few percent.

The White House plan also includes initiatives targeting domestic energy efficiency, climate resilience, and international climate diplomacy. But it conspicuously avoids calling for policies that would require assent from Congress to implement. Obama’s nominee for EPA administrator, Gina McCarthy, has yet to be confirmed, and the administration faces continued opposition on Capitol Hill to any kind of comprehensive climate policy.

Environmentalists generally applauded the president's message while underscoring the need for urgency, given the time it takes to push complex rules through the regulatory process. The public comment period on the administration's proposal to regulate emissions from new power plants ended a year ago, for example, and the rule has not been finalized. Obama's speech comes six months into his second term and more than two years after his last major address on climate change.

"President Obama has a little more than three years to cement a lasting legacy on climate change, and he'll need every last second," says Alden Meyer, strategy and policy director at the Union of Concerned Scientists, an advocacy group based in Cambridge, Massachusetts.

The president's plan also proposes a new round of fuel economy standards for heavy duty vehicles manufactured after 2018, building on regulations established in 2011. The plan includes funding for advanced fossil fuel projects, a new round of efficiency regulations for household appliances, and additional commitments to generate renewable energy on federal lands. To nudge these plans along, Obama is backing calls for a "Quadrennial Energy Review", designed to assess progress and help establish a national energy strategy.

Tom Peterson, president of the Center for Climate Studies, a climate think tank in Washington, says the administration deserves credit for building "a more holistic" climate strategy. Nonetheless, he said it will be difficult for the United States to meet its emissions commitments. "This gets us much closer, but there’s still more work that needs to be done," Peterson says.