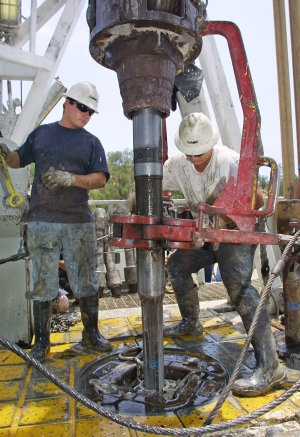 The hole drilled into the San Andreas fault near Parkfield, California, is about 3 kilometres deep.

The future of an effort to monitor earthquakes from within the infamous San Andreas fault is on shaky ground. On 14 April, the US National Science Foundation (NSF) said that it will stop soliciting proposals for new experiments at the partially completed San Andreas Fault Observatory at Depth (SAFOD), and may move to “mothball” the facility, located in Parkfield, California, within the year.

The US$25-million project aimed to achieve two firsts: to sample rocks from deep inside an active fault, and to install pressure sensors, thermometers and seismometers within a roughly 3-kilometre-deep borehole to catch a small earthquake in action. But instruments placed in the hole failed in 2008, shortly after they were installed, and the NSF says that it has received only one proposal for further research at the site.

Nevertheless, the agency’s latest move has disappointed researchers who still dream of installing instruments in the SAFOD drill hole to monitor tremors.

“Given all the money and time invested, in my opinion it would be wise to finish the job,” says seismologist Cliff Thurber of the University of Wisconsin–Madison, who organized a 31 March letter of support for the project signed by 36 scientists. Mark Zoback, a geophysicist at Stanford University in Palo Alto, California, who was one of SAFOD’s original principal investigators, calls the NSF’s decision short-sighted.

The project, which began in 2004, had a bright beginning. Despite technical challenges and budget troubles, researchers were able to retrieve rock samples from the San Andreas fault, the source of earthquakes that threaten California cities from San Francisco to Los Angeles. Analysis of the rock samples has been a huge success, revealing new information about the mineralogy of the fault, says James Whitcomb, who heads the NSF’s deep-Earth processes section in Arlington, Virginia.

But when instruments were installed in the hole in 2008, they only worked for a few weeks before malfunctioning in the harsh environment. By then the project had run out of money, Whitcomb says.

In 2011, an independent engineering report commissioned by the NSF concluded that the drilling project suffered from financial pressure, lack of a clear project manager and some questionable technical decisions. The cost of the instrument package was slashed from $2.6 million down to $0.4 million after the initial drilling went over budget.

Some researchers are keen to try again. But Whitcomb says that putting new instruments in the borehole would cost between $3 million and $20 million, and it is not clear where the money would come from.

It is also not clear who would run the project. In 2008, the NSF passed control of SAFOD from its principal investigators at Stanford and the US Geological Survey in Menlo Park, California, to UNAVCO, a geodesy consortium in Boulder, Colorado. “It wasn’t a match made in heaven,” says Thurber. “They are not borehole, fault-zone people — that’s not their cup of tea.”

UNAVCO severed its ties to the project in September 2013, and an NSF call for researchers to set up their own group to oversee the site was unsuccessful. Today SAFOD has no official manager and only a few working instruments, including a simple seismometer and a strain meter.

Although the NSF is no longer inviting proposals for managing or using SAFOD, the agency says that it will still accept unsolicited applications.

Thurber says that the facility should be used to compare different sections of the San Andreas fault. The hole, near Parkfield, sits at the border between a quiet part of the fault that creeps along smoothly without producing quakes and a more dangerous patch that tends to fracture under stress and produce quakes. Thurber's plan would use new downhole instruments to map the edge of the brittle patch; then researchers would need to drill about 100 metres sideways into that area. All told, it would be a multimillion-dollar proposition.

But for now, the site’s prospects seem bleak. Whitcomb says that the NSF has not decided to abandon the facility, but will take up the question in six months. “People are still talking about stepping in,” he says. “But we haven’t received a [management] proposal yet, and we’ve given the community a lot of time.”