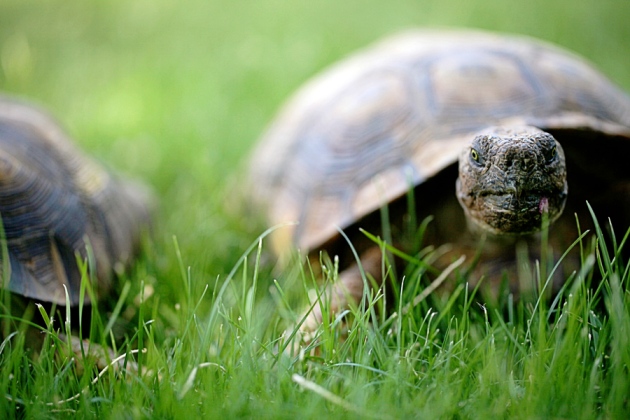 The desert tortoise (Gopherus agassizii) is unusual in that its mortality decreases as it gets older.

Guppies and water fleas live only days or weeks, but their mortality increases sharply with age, as is the case in longer-lived animals such as humans. But other animals — such as the hermit crab, the red abalone and the hydra, a microscopic freshwater animal that can live centuries — buck that trend, enjoying near constant levels of fertility and mortality.

A comparison of standardized demographic patterns across 46 species, published today in Nature1, suggests that the vast diversity of ‘ageing strategies’ among them challenges the notion that evolution inevitably leads to senescence, or deterioration of mortality and fertility, with age, says Owen Jones, a biologist at the University of Southern Denmark in Odense, who led the study.

“By taking a grand view and doing a survey across species, we found plenty of violations of this underpinning theory,” says Jones.

To compare fertility and mortality patterns, the authors assembled published life-history data sets for 11 mammals, 12 other vertebrates, 10 invertebrates, 12 vascular plants and a green alga, and standardized the trajectories — dividing mortality rates at each point in the lifespan by the average mortality rate.

When the researchers organized the species along a senescence continuum, mammals were clustered at one end of the spectrum, among the organisms that have an abrupt shift in mortality, and plants, which boast vastly lower relative mortality, populated the other end. Birds and invertebrates were scattered throughout.

The authors suggest that the diversity of ageing strategies across the spectrum should challenge theoreticians. “The [evolutionary] theories we have are applicable in lots of situations — but they can’t explain some cases,” says Jones. “It’s not about throwing out old theories; it’s about modifying theories to work on all species.” 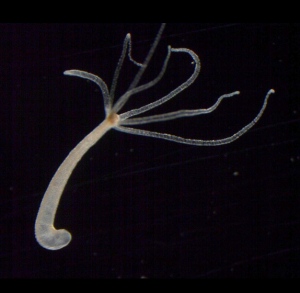 The freshwater medusa (Hydra magnipapillata) can live for centuries, with no decline in fertility.

This is the first attempt to standardize cross-species comparisons of mortality and survivorship, but it has several scientists scratching their heads because, they say, the diversity of life strategies is well established. More importantly, they question the biological basis of the comparison.

At issue is the validity of comparing lab-raised, sometimes inbred, populations to field studies, some of which go on for decades.  “This approach is like making a fruit salad and imagining it can tell you something about evolution of the orange,” says Steven Austad, an evolutionary biologist at the University of Texas Health Science Center in San Antonio. “This comparison of demographic trajectories across the tree of life is completely divorced from biology and ignores the impact of the environment,” he adds.

Laurence Mueller, an evolutionary biologist at the University of California at Irvine, agrees. “Organisms in the field die from a lot of causes — for example, predation or disease — other than ageing,” he says. “Unfortunately, the unknown source of mortality in field-data sets confounds the age-related patterns of senescence, which is what we’re all interested in,” he adds.

Study co-author Hal Caswell, a mathematical ecologist at Woods Hole Oceanographic Institution in Massachusetts, says that attempting to distinguish whether or not deaths are senescence related is a mistake. “An increase in mortality with age represents a decline in the ability to deal with hazards of death, regardless of their source, and is defined as senescence,” he says.

But the critics interviewed by Nature say that they doubt this paper presents a formidable challenge to evolutionary theory. “This study is a useful reminder that the patterns of ageing are diverse, but it is not a refutation of existing theory,” says Stephen Stearns, an evolutionary biologist at Yale University in New Haven, Connecticut. “That would require difficult empirical measures of the trade-offs between reproduction and mortality, which haven't yet been done.”