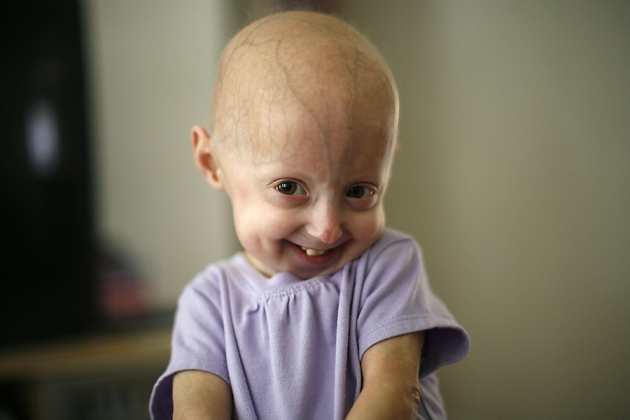 Progeria is one condition that has benefited from a redeployment of ‘failed’ drugs.

Progeria is a rare, lethal disease that ages children so rapidly that they seem to be 80 years old when they are just 10. So patients and families celebrated the news last week of the first therapeutic success against the disease — as did advocates of the notion that abandoned drugs can rise again. A clinical trial has shown improved symptoms in children with the disease who used lonafarnib (L. B. Gordon Proc. Natl Acad. Sci. USA http://doi.org/jfz; 2012), a drug developed by Merck in the 1990s that failed against its original target, head and neck cancer.

If resurrecting an ineffective drug works for progeria, why not for other conditions, asks Francis Collins, director of the National Institutes of Health (NIH) in Bethesda, Maryland, whose lab in 2003 identified the mutated gene that causes progeria. “And why not seek those answers by ‘crowd-sourcing’?” he asks.

Roughly 30,000 drugs have been shelved by the pharmaceutical industry over the past three decades, and medical funders are now inviting researchers to find a new future for some of them. This month, the UK Medical Research Council is expected to announce the initial awards in a £10-million (US$16-million) programme aimed at repurposing 22 stalled compounds developed by London-based AstraZeneca. And this week, the NIH’s National Center for Advancing Translational Sciences (NCATS) will solicit the first full applications to a similar programme it launched in May.

NCATS invited researchers to look for new uses for 58 abandoned compounds contributed by eight big drug companies (see ‘Crowd-sourcing drug development’). All were taken through preclinical testing and into early human trials at a cost of millions of dollars, and all were found to be safe. They were abandoned either for lack of efficacy or for business reasons. 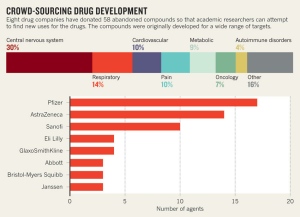 The planned budget for the NCATS programme is just $20 million in 2013, but the competition seems to be fierce: by mid-August, the agency had received nearly 160 pre-applications for a maximum of eight awards. Kathy Hudson, acting deputy director of NCATS, says that the pre-applications sought to attack conditions as diverse as autism, Alzheimer’s disease and cancer. For many compounds, multiple uses were conceived; for one compound alone, the agency received seven applications targeting six diseases or conditions. This week, the most promising will be asked to submit full applications.

The winners, to be announced in June 2013, will have to provide preclinical evidence of the biological rationale for the compound’s new use. The company then gets to decide whether it wants to take that finding any further.

John LaMattina, former president of global research and development at Pfizer in New York, thinks that the programme faces long odds because drug companies have already tested these compounds against many targets. “There has been an awful lot of hype,” says LaMattina, who is now a senior partner at PureTech Ventures, a life-sciences venture-capital company in Boston, Massachusetts. Any new finding by an NIH grant recipient, he adds “is going to have to be pretty compelling for a company to take it forward”.

Steven Potkin, a psychiatrist at the University of California, Irvine, worries that even compelling findings may not be enough to persuade companies to reinvest in a shelved compound. Potkin wants to repurpose a compound originally aimed at depression that he thinks could help with mood-regulation problems across a range of psychiatric diseases from bipolar disorder to schizophrenia. But the NIH requires the participating companies to share the intellectual property created if grant recipients find new uses for a compound; a company can then license it back to develop the drug. “There is no guarantee that this will happen,” Potkin says.

Hudson says the companies have agreed that, if they are not interested, the academic partner can either purchase the agent from the company, or have it manufactured by a third party, so that the push towards the clinic can still proceed. Then, “if the company elects not to pursue the new indication, all is not lost”, Hudson says.

Chemists are grumbling about a different issue: the companies have not released the structures of the 58 compounds (although the programme’s winners will learn the structures of their compounds). That has led to a “tremendous waste of effort” for chemists trying to deduce any new activities that the compounds might have, says Jeremy Berg, former director of the NIH’s National Institute of General Medical Sciences in Bethesda, and now a computational and systems biologist at the University of Pittsburgh in Pennsylvania.

But some say that the NIH had to meet the industry halfway. “This project has required a delicate dance to get industry to share compounds and data,” said Thomas Insel, who was acting director of NCATS until 23 September, in an August e-mail to Berg. “My hope is that if this first step goes well, we can expect more sharing in the future.”