Can current theories of cosmology explain how the Universe evolved? One way to find out is to plug everything we think we know about the early Universe and how galaxies form into a supercomputer, and see what comes out. In a simulation presented today in Nature1, researchers did just that — and revealed a cosmos that looks rather like our own. The findings lend weight to the standard model of cosmology, but could also help physicists to probe where our models of galaxy formation fall down.

Mark Vogelsberger, a physicist at the Massachusetts Institute of Technology in Cambridge, and his colleagues created a model of the Universe that follows the evolution of both visible and dark matter starting just 12 million years after the Big Bang (see video). While previous models have either been small and detailed or large and coarse, this simulation covers a region of space big enough to be representative of the whole Universe — a cube 106.5 megaparsecs (350 million light years) across — but is detailed enough to resolve small-scale structures, such as individual galaxies. Unlike previous simulations, it produces a mixture of galaxy shapes that fit observations well. Its also accurately recreates the large-scale distribution of galaxy clusters and neutral gas in the Universe, as well as the hydrogen and heavy element content of galaxies. 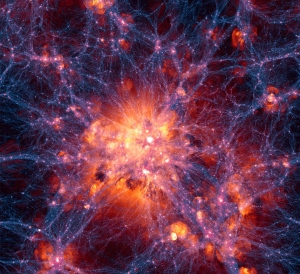 A large galaxy cluster — together with a dense halo of dark matter — formed at the centre of the simulated Universe.

Vogelsberger says that the simulation's success is down to its improved algorithms, and the fact that its calculations include a rich variety of physics, such as the formation of supermassive black holes and their effect on their environments. The model, called Illustris, requires a huge amount of computing power: running it on even a state-of-the-art desktop computer would take almost 2,000 years, he adds. Even run across more than 8,000 processors, the simulation still took several months.

Previous models have struggled to get even the most basic of galaxy properties right, says Chris Brook, an astrophysicist at the Autonomous University of Madrid who studies galaxy formation using simulations. It was unclear whether failures were caused by issues with modelling galaxy formation, or an underlying problem with physicists' standard model of Big Bang cosmology, in which only 4% of the Universe is ordinary matter, 23% is dark matter and 73% is dark energy.

Only in recent years has it been possible to use this model to simulate galaxies that match a range of observed properties. That Vogelsberger and his colleagues' model reproduces the variety of galaxy types seen in the real Universe puts the standard model on firmer ground, says Brook. From now on, such simulations will become much more useful for predicting and interpreting observational results, he adds.

Although the model agrees well with observations of the Universe, it does have anomalies. For example, it shows low-mass galaxies building up too early. “The idea now is to try to understand why this is happening and see what we are missing in terms of galaxy formation,” says Vogelsberger.