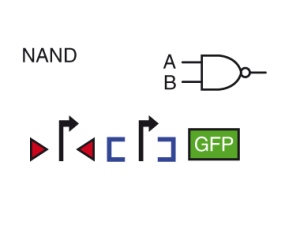 Synthetic DNA can perform logic operations such as “NAND” and give out the answer by lighting up the cell with green fluorescent protein, or GFP.

Synthetic biologists have developed DNA modules that perform logic operations in living cells. These ‘genetic circuits’ could be used to track key moments in a cell’s life or, at the flick of a chemical switch, change a cell’s fate, the researchers say. Their results are described this week in Nature Biotechnology1.

Synthetic biology seeks to bring concepts from electronic engineering to cell biology, treating gene functions as components in a circuit. To that end, researchers at the Massachusetts Institute of Technology (MIT) in Cambridge have devised a set of simple genetic modules that respond to inputs much like the Boolean logic gates used in computers.

“These developments will more readily enable one to create programmable cells with decision-making capabilities for a variety of applications,” says James Collins, a synthetic biologist at Boston University in Massachusetts who was not involved in the study.

Collins developed the genetic ‘toggle switch’ that helped to kick-start the field of synthetic biology more than a decade ago2. A wide range of computational circuits for cells have been developed since, including a simple counter that Collins and his team devised in 20093.

But “to make this a really rigorous engineering discipline, we need to move towards frameworks that allow you to program cells in a more scalable fashion,” says Timothy Lu, a synthetic biologist at MIT who led the latest research. “We wanted to show you can assemble a bunch of simple parts in a very easy fashion to give you many types of logical functions.”

Lu’s logic modules are based on plasmids, circular strings of DNA, that are inserted into Escherichia coli cells. He and his colleagues devised 16 plasmids — one for  each of the binary logic functions allowable in computation. Each variant comprises promoter and terminator DNA sequences, which start or halt gene transcription, and an ‘output gene’ that encodes a green fluorescent protein.

The key to the system is the use of recombinase enzymes, which cut and rearrange promoter and terminator DNA sequences to turn them on or off. In other words, recombinase enzymes are the inputs that determine whether the output gene is transcribed.

An electronic ‘AND’ gate, for example, gives a positive output only when voltage is applied to both of its inputs. In the genetic version, the output gene is transcribed only when both terminator sequences between it and the promoter sequence are neutralized by two inputs in the form of recombinase enzymes.

Lu says that although recombinases have been used similarly in the past — to write data into a DNA memory, for example — the latest work takes the idea a step further by making the DNA part of the computation itself. “If the DNA that you alter is a regulatory element, like a promoter sequence or a terminator, then that gives you the ability to control something inside the cell. And it’s that control that gives you the logic.”

Christopher Voigt, a synthetic biologist also at MIT, calls the artificial modules “a very digital and permanent way to store information in DNA. The logic can store multiple experiences — for example, if the cells had encountered two environments and in what order.”

Voigt says that there is another advantage to this system. “[The change] is permanent. After the cells die, the information can still be retrieved from the DNA.” Indeed, the researchers found that the altered plasmids are passed down through at least 90 cell generations — which would be important for a biologist wanting to record key moments in a cell’s ancestry.

Lu says that the approach could also be useful in biotechnology. Using simple forms of these addressable switches, manufacturers could grow cell cultures in which key genes are turned off until activated by a signal compound, permanently turning on production of a drug, for example, when the system is ready. Other switches could halt production, he says, when some threshold has been reached.