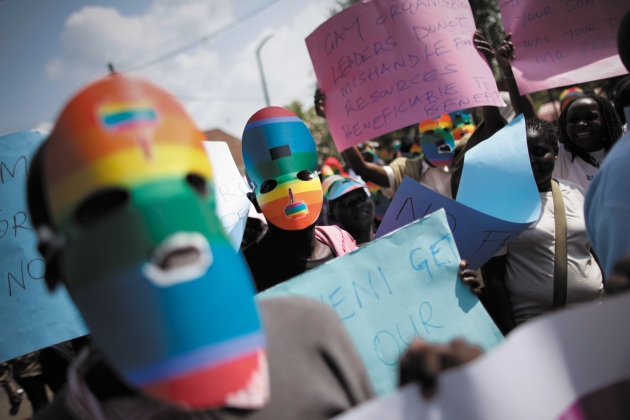 On the morning of Saturday 12 April, ten police officers raided Maaygo, a men's health and HIV/AIDS advocacy organization in a residential area of Kisumu in western Kenya. Staff watched helplessly as the officers confiscated information leaflets and even the model penis used in condom demonstrations. The police arrested the organization's director and finance officer, as well as one of its members, for “illegally practising sexual orientation information”.

The detainees were released later that day after Daniel Onyango, director of a local homosexual-rights group, arrived at the police station and explained that it was not actually a crime to distribute information on sexual orientation. Maaygo will continue its operations — albeit from a less conspicuous location in Kisumu.

An HIV treatment and research project in Uganda was not so lucky. On 3 April, the Makerere University Walter Reed Project in Kampala suspended its operations indefinitely after a staff member was arrested on charges of recruiting homosexuals and carrying out 'unethical research'.

Stories such as these are becoming increasingly common across Africa, where vocal protests against homosexuality are on the rise. Many countries, including Ethiopia, Nigeria and Senegal, have stringent anti-homosexuality laws. In February, Uganda toughened its stance, passing harsh new measures that hand down life sentences to people convicted of having gay sex and that stipulate up to seven years in jail for actively supporting the rights of gay people.

Antipathy towards homosexuality has hampered efforts to curb HIV in these countries. The Joint United Nations Programme on HIV/AIDS (UNAIDS) has identified men who have sex with men (MSM) as a key risk group for HIV infection, but because of cultural prejudices, gay people in Africa are often unable to access information on how to protect themselves from HIV, and those who become infected are often denied treatment. Homophobia and criminalization are also impeding research on MSM and HIV transmission.

“There are several examples where research has been stopped or slowed based on these laws,” says Stefan Baral, an epidemiologist and physician at Johns Hopkins Bloomberg School of Public Health in Baltimore, Maryland. He has seen the problem at first hand, having conducted research with MSM in several African countries over the past decade. “What you end up with then is a data paradox, where you know the least in the places with the most stigma,” he says.

Researchers and clinicians say that there are a few small signs of hope. In Kenya, for example, one clinic has managed to use education to curb anti-gay sentiments, providing a model that might be successful elsewhere. But that relative stability could easily crumble with changes in the local community or in the country's leadership.

The tide of homophobia has hit particularly hard in Uganda, says Paul Semugoma, a gay physician and researcher from that country who left two years ago and now lives in exile in South Africa.

“Uganda is the worst, it's a witch-hunt,” he says. A research project was supposed to start there this year to identify groups at risk of HIV, but it was suspended because of concerns for the safety of the researchers and participants, he says. When it comes to MSM, he adds, “what's going to happen is that there's not going to be any up-to-date information on this risk group”.

Similar problems are plaguing research in Ethiopia, where same-sex encounters are punishable by up to 15 years in prison. Researchers are kept from studying MSM and HIV by the Ethiopian Public Health Institute, which must approve medical research in the country.

A programme run by the US Centers for Disease Control and Prevention and the Ethiopian Public Health Association managed to pass the screening process in 2011 because it used terms such as 'most at-risk populations' rather than MSM or gay, says an Ethiopian advocate for gay and transgender health and human rights, who lives in exile in the United States and asked not to be named because of concerns about the safety of his family and friends. Once the government found out that the project would target MSM and related groups, the research was stopped, he says.

The problem is not limited to countries where homosexuality is a crime. “In many countries in sub-Saharan Africa, we just cannot do research on MSM-related topics,” says Lung Vu, an HIV and tuberculosis research adviser at Population Services International, a global-health organization in Washington DC. “Government officials and religious leaders just don't allow for this to happen.”

“The problem isn't limited to countries where homosexuality is a crime.”

This is detrimental, he says, because data on MSM are needed to understand and combat HIV in Africa, where there is an epidemic of the disease. In an analysis1 last year, Vu and his colleagues found that the prevalence of HIV among MSM in three large Nigerian cities was between four and ten times that in the general population. Scraps of data from Senegal and other countries paint the same picture.

Because there is so little information on MSM in Africa, researchers are only now starting to appreciate how much that population and other sexual minorities are spurring the spread of HIV on the continent, says Kent Klindera, director of an initiative at amfAR, the Foundation for AIDS Research in New York, that promotes HIV research and prevention for MSM and transgender individuals.

Funding problems have also limited research in this area, says a 2013 amfAR report2. Of the US$1.5 billion allocated to six African countries (Botswana, Malawi, Namibia, Swaziland, Zambia and Zimbabwe) by the Global Fund to fight AIDS, Tuberculosis and Malaria since 2001, only 0.07% went to research concerning MSM and transgender people. Four of the countries reported no dedicated MSM projects whatsoever.

Despite the problems, researchers in Africa point to a few bright spots. For example, Mtwapa, a coastal town north of Mombasa, Kenya, managed to calm a volatile situation through community engagement and education about how the research can help society at large.

The trouble at Mtwapa centred on an HIV clinic run by the Kenyan Medical Research Institute (KEMRI), which conducted risk-group studies at the facility. On 12 February 2010, a mob of several hundred people charged the clinic, incited by two religious leaders — a Christian bishop and a Muslim imam.

The riot was based on misinformation. “It started with a rumour that two gay men were getting married in the town,” says Eduard Sanders, an epidemiologist with the University of Oxford, UK, who has studied MSM in Mtwapa since 2005, and who witnessed the riot. “But when the mob couldn't find any hint of the wedding, it descended on the clinic because of its well-known research on MSM.”

Armed with sticks, stones and other weapons, the crowd surrounded the clinic, demanding that the gay men come out. Police arrested people accused of being gay — possibly as a way of saving them from mob justice — and later released them. One KEMRI volunteer was severely beaten, according to the international group Human Rights Watch.

Today, the clinic is safer, says Sanders, thanks to a campaign to inform local residents about its role in managing HIV in the area. As part of this effort, KEMRI hired community-liaison officer Evanson Gichuru, who met and interviewed local leaders and the people who organized the attack. Most of the antipathy, he observed, came down to misconceptions about gay people, such as the idea that they groom young boys to become prostitutes. Gichuru's meetings, combined with a media campaign and health-worker training on MSM sensitivities, have brought a turnaround in attitudes. There have been no further attacks on the clinic, and research conducted after health-worker training found3 that it significantly reduced homophobic tendencies, particularly among those who had previously scored a high rating on a homophobia scale.

An important factor in changing attitudes was teaching people that the health of the wider community in Kenya depends on understanding and treating HIV among MSM, says Gichuru. Many men who have sex with men in Kenya also have sex with women, so a high HIV incidence in this group puts society in general at risk.

But neither Sanders nor Gichuru wants to overstate the success in Mtwapa. “I don't want to be overconfident,” says Sanders. There is still a big stigma to being gay in Kenya, he adds.

And the techniques used to raise awareness there are not likely to work in Uganda, says Semugoma. “In Uganda the homophobia is not only from the people, it's also coming from the state,” he says.

Researchers point to Malawi as another example of positive developments. A few years ago, the Centre for the Development of People (CEDEP), a human-rights organization that supports minorities including MSM, had to scale down its activities after health workers were arrested. But in 2012, partly thanks to CEDEP's advocacy, Malawian President Joyce Banda suspended the country's laws criminalizing homosexuality. The arrests have stopped and CEDEP now has five offices across Malawi.

The raid on Maaygo's office in Kenya last month worried many physicians and researchers, but it also provided an opportunity. In subsequent meetings with local authorities and the police, people from the organization and other human-rights groups discussed how HIV treatment and support for MSM are needed to fight the high HIV infection rates in Kisumu, says Onyango, who attended the first such meeting. “Currently all is well. We have not had any further incidents,” he says. “Maaygo are still doing their activities, although at a slow pace so that we can sensitize the community.”