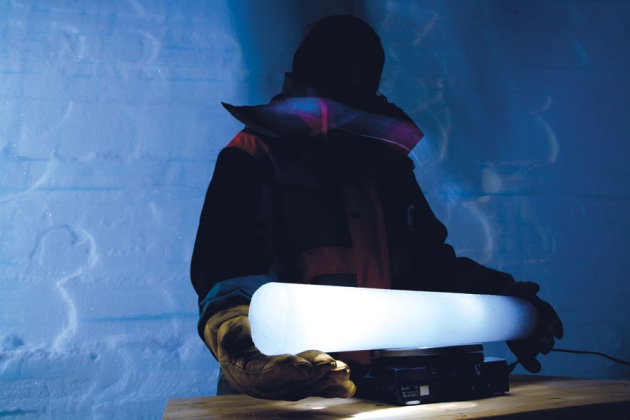 Isotopes in this ice core reveal how glaciers responded to climate change more than 100,000 years ago.

Over a few exceptionally warm days last July, Greenland’s frozen surface turned into a colossal puddle. Even the coldest parts of the world’s largest island saw ice thaw and rain fall, fuelling concerns over the future of glaciers that hold enough water to raise global sea levels by around 7 metres.

A record of the past written in an ancient ice core now reveals that Greenland’s ice sheet is not melted as easily as some fear. But the message is not entirely reassuring: it also implies that Antarctica has much greater potential to raise sea levels than previously thought.

The 2,540-metre-long core comes from a site in northwestern Greenland that hosts some of the island’s oldest ice, dating back to the Eemian interglacial: the Earth’s most recent warm period before temperate conditions returned once more some 12,000 years ago. Lasting from about 130,000 to 115,000 years ago, the Eemian warming was triggered by increases in summer sunshine, resulting from variations in Earth’s orbit and axis of rotation. But it may be a good model of the man-made climate change expected over the coming centuries. “We are in a similar climate regime as the world was in the early Eemian,” says Eric Steig, who studies ice cores at the University of Washington in Seattle.

The North Greenland Eemian Ice Drilling (NEEM) project, a 14-nation research team, has spent the past four years drilling and analysing the core, and its results are published in Nature this week1. Extracting a record of the Eemian was a challenge: the core’s lowest layers had been deformed and folded by the constant movement of the ice sheet. “Of course we had hoped for a purer record,” says Dorthe Dahl-Jensen, a palaeoclimatologist at the University of Copenhagen who led the NEEM project. “But it is a fantastic record even so, and it does have all the information we needed to reliably reconstruct the Eemian climate and ice-sheet history.”

She and her colleagues painstakingly compared and synchronized the disturbed parts of their core, layer by layer, with other well-dated ice cores from Greenland and Antarctica to tease out the story. “I am very sure that we have got the picture right,” says Dahl-Jensen.

The results confirm the warmth of the Eemian climate: ratios of oxygen and nitrogen isotopes in the core show that some 6,000 years after the onset of the Eemian, local temperatures reached about 8 °C above the present-day annual average of roughly −25 °C.

But the ice sheet at the NEEM site did not get much thinner than its present 2.5 kilometres, according to the air content in the core that the team correlated with elevation. Before the Eemian, the Greenland ice sheet was some 200 metres thicker than it is today, and after six millennia of strong warming the ice sheet lost just over one-tenth of its thickness, dropping to 130 metres below its present height. It then remained steady until the end of the Eemian (see ‘Warm spell’). “It’s illuminating to see just how strongly Greenland had warmed at the time,” says Steig. “That the warming seemingly caused only relatively modest melting is of course also remarkable.” 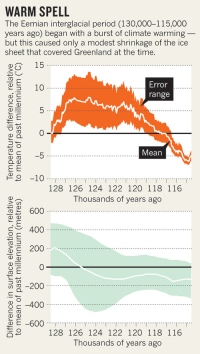 There is a small possibility that the reconstruction is incomplete because it reflects conditions at only one site, which may provoke debate about the results, says Steig. Until the past few years, most researchers had thought that Greenland contributed at least half of the 6–8 metres of Eemian sea-level rise that has been deduced from records of ancient corals and other markers2. Yet the NEEM core implies that Greenland’s ice sheet lost at most one-quarter of its volume, and contributed no more than 2 metres of sea-level rise. “The good news is that Greenland is not as sensitive to climate warming as we thought,” says Dahl-Jensen. “The bad news is that if Greenland’s ice sheet did not disappear during the Eemian, Antarctica must have been responsible for a significant part of the sea-level rise,” she adds. These two ice sheets, the world’s biggest, have been stable for most of the current interglacial period. But since temperatures began to soar a couple of decades ago, Greenland and Antarctica have been shedding ice fast. Between 1992 and 2011, they lost around 2,700 billion and 1,350 billion tonnes of ice, respectively — enough to raise sea levels by about 0.6 millimetres per year3. Scientists think that by 2100, the global sea level may have risen by 0.5–1.2 metres above current levels.

Although ice loss is currently greatest in Greenland, that could change: some parts of Antarctica are warming almost twice as fast as previously believed4, and glaciers in western Antarctica have retreated at a worrying rate in the past few decades5. Furthermore, Eemian sea-level rise seems to have proceeded in drastic jumps, rather than gradually6, suggesting that the ongoing sea-level rise could accelerate.

That may not be a menace to civilization yet. But, says Dahl-Jensen, if Antarctica’s massive ice sheets do disintegrate — as the NEEM core suggests they did before — we could face an extremely rapid sea-level rise around the world. NEEM’s message is that the Eemian is distant only in years, not in consequence.