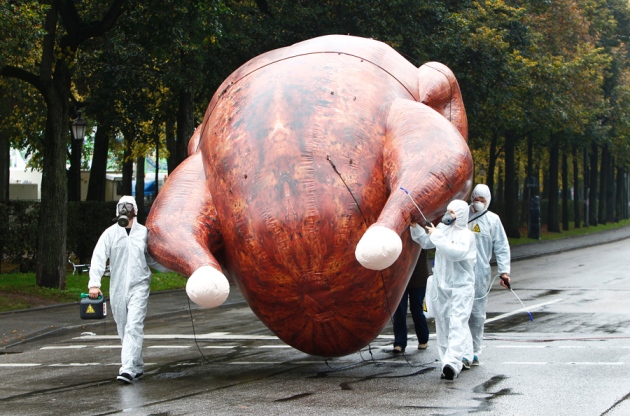 Activists campaign against a trade treaty that they fear will allow US chlorine-washed chicken into the EU.

Two treaties that would govern most of the world’s trade — and change how nations across the globe use scientific evidence to craft regulations — inched closer to fruition this week. On 22 May, the US Senate approved legislation that could speed up approval of the Transatlantic Trade and Investment Partnership (TTIP) and the Trans-Pacific Partnership (TPP).

Public attention has focused on the economic impact of the treaties: TTIP is between the United States and the European Union (EU) and the TPP is between a variety of North American and Asian nations (including the United States, Mexico, Japan, Australia and Malaysia, but not China or India) whose economies together account for around 60% of the world’s gross domestic product. But researchers, industry groups and non-governmental organizations (NGOs) are urging scrutiny of the treaties’ impact on science.

Supporters point to the agreements’ potential to boost research in pharmaceuticals. Critics say that the treaties could undermine countries’ abilities to protect the health of their citizens, as well as to cleave to nation-specific comfort levels with genetically modified (GM) organisms.

“TTIP really falls squarely within the domain of science and technology policy,” says Sebastian Pfotenhauer, a science-policy researcher at the Massachusetts Institute of Technology in Cambridge. “What is at stake is the sovereignty of countries to interpret scientific data and regulate risks in the way they choose.”

In the case of TTIP, tariffs between the EU and United States are already so low that the benefits to business are expected to come mainly from harmonization of regulations, which differ significantly between the two blocs. The EU is sceptical of GM crops, limit­ing what can be grown and imported there. In the United States, by contrast, the crops are widespread and are generally accepted by the public. However, the United States has tougher standards in other areas of trade: for example, it heavily restricts beef purchases from the EU because of fears over BSE (bovine spongiform encephalitis), also known as mad cow disease.

Race to the bottom

Some groups fear that agreements such as TTIP could be used to force all nations to adopt the rules of the country with the least regulation in each field. “It sets up a series of regulatory steps that will undoubtedly create a race to the bottom,” says David Azoulay, an attorney with the Center for International Environmental Law (CIEL) in Geneva, Switzerland. “We believe that there are basically no benefits that will come from TTIP for people or the environment,” adds Fabian Flues, a campaigner for Friends of the Earth Europe in Geneva. CIEL notes that the agrochemical industry is already considering using TTIP to increase the acceptable level of pesticide residues on food by pushing for the higher US threshold to be adopted in the EU.

“TTIP is set to change the way in which scientific cooperation is set to take place.”

Others dismiss the idea of a ‘race to the bottom’. The European Commission says that harmonization need not lower regulatory protection. And Alberto Alemanno, a lawyer at the business school HEC Paris who has done consultancy work for the EU’s TTIP negotiating team, says that TTIP aims to create a system that allows regulators to discuss when their standards are equivalent, which does not necessarily mean making all regulations identical, as many people assume. If regulations are harmonized in some instances, he points out, citizens would be able to push for the higher standard — not the lower — to be adopted.

Greater clarity on how medicines will be treated by regulators would be a boon for pharmaceutical research, says Richard Bergström, director-general of the European Federation of Pharmaceutical Industries and Associations in Brussels. It could also mean that drugs reach patients earlier, because companies would no longer have to apply separately to US and EU regulators, a process that can involve costly and time-consuming tests, especially for paediatric medicines. “I’m both surprised and quite frustrated by the debate around TTIP,” he says.

Another fear surrounding the trade agreements is that if they are ratified they will include a legal framework known as an investor-to-state dispute resolution mechanism, which would allow companies to take governments to court and overturn legislation. A company could thus limit a government’s ability to regulate a certain chemical on health grounds if that were seen as an unreasonable restriction of the company’s trade as laid out in the treaty. Objectors to the treaties fear that a dispute provision would also discourage governments from passing strict legislation in the first place.

The history of the North American Free Trade Agreement (NAFTA) and other such agreements is littered with such cases, says Pfotenhauer. The pharmaceutical firm Eli Lilly is currently suing Canada under NAFTA after the government invalidated patents on two of the company’s drugs in an argument over interpretation of clinical-trial data. Companies have also tried to use NAFTA to force Canada to allow toxic-waste exports and to include an additive in petrol that the nation’s regulators claimed was dangerous.

These cases revolved around the interpretation of scientific knowledge, notes Pfotenhauer. Indeed, one thing that NGOs, lawyers and governments agree on is that scientists should care about the trade deals. “TTIP is set to change the way in which scientific cooperation is set to take place across the Atlantic,” says Alemanno.

And there may be little point in fighting the deals. Against a background of gloom and pro-free-trade governments, says Alemanno, even if this particular trade negotiation breaks down, as a philosophy, “TTIP is here to stay”.