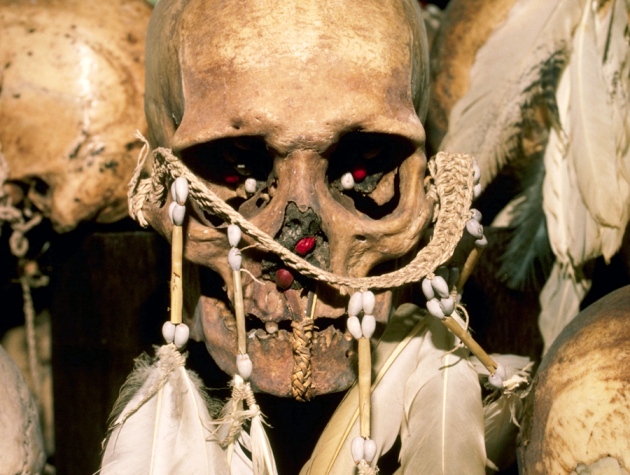 A genetic variant protected some practitioners of cannibalism from prion disease.

Scientists who study a rare brain disease that once devastated entire communities in Papua New Guinea have described a genetic variant that appears to stop misfolded proteins known as prions from propagating in the brain1.

Kuru was first observed in the mid-twentieth century among the Fore people of Papua New Guinea. At its peak in the late 1950s, the disease killed up to 2% of the group's population each year. Scientists later traced the illness to ritual cannibalism2, in which tribe members ate the brains and nervous systems of their dead. The outbreak probably began when a Fore person consumed body parts from someone who had sporadic Creutzfeldt-Jakob disease (CJD), a prion disease that spontaneously strikes about one person in a million each year.

Scientists have noted previously that some people seem less susceptible to prion diseases if they have an amino-acid substitution in a particular region of the prion protein — codon 1293. And in 2009, a team led by John Collinge — a prion researcher at University College London who is also the lead author of the most recent analysis — found another protective mutation among the Fore, in codon 1274.

The group's latest work, reported on 10 June in Nature1, shows that the amino-acid change that occurs at this codon, replacing a glycine with a valine, has a different and more powerful effect than the substitution at codon 129. The codon 129 variant confers some protection against prion disease only when it is present on one of the two copies of the gene that encodes the protein. But transgenic mice with the codon-127 mutation were completely resistant to kuru and CJD regardless of whether they bore one or two copies of it.

The researchers say that the mutation in codon 127 appears to confer protection by preventing prion proteins from becoming misshapen.

“It is a surprise,” says Eric Minikel, a prion researcher at the Broad Institute in Cambridge, Massachusetts. “This was a story I didn’t expect to have another chapter.”

Collinge and his colleagues are now continuing their work, to figure out the mutant protein's structure and how it shields against illness.