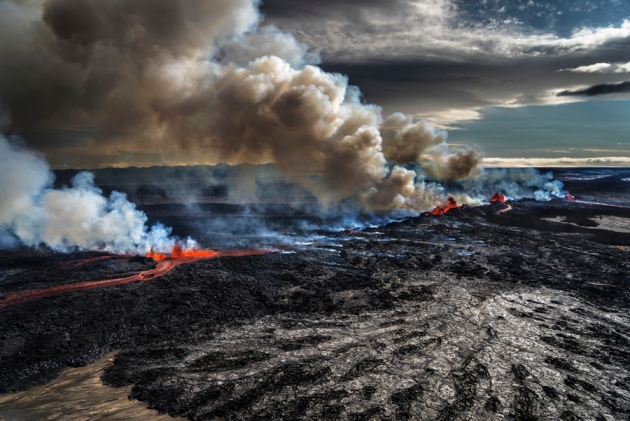 Record amounts of gas have spewed from Iceland’s Holuhraun plain.

Icelandic sunrises and sunsets have been tinged blood red, of late. Above the maritime bustle of Reykjavik’s harbour and the city’s towering concrete Hallgrímskirkja church, volcanic pollution gives the skies an eerie glow.

For eight weeks, lava has been spurting out of a fissure in the ground radiating from the Bárðarbunga volcano, about 250 kilometres from Reykjavik. Sulphur dioxide has been spurting too — 35,000 tonnes of it a day, more than twice the amount spewing from all of Europe’s smokestacks. The gas has spread across the Icelandic countryside, causing people to wheeze and trapping some indoors.

The record-setting amount of pollution has surprised even volcanologists in the middle of a major project funded by the European Union to understand the island’s fiery activity. They had been preparing for a repeat of the 2010 Eyjafjallajökull eruption, which led to a billowing ash plume that grounded planes across Europe. “Everybody was expecting a big ash cloud, and now we have something totally different,” says Anja Schmidt, an atmospheric modeller at the University of Leeds, UK, who studies how volcanic gases spread.

The timing of the eruption was just about perfect for the project, called FUTUREVOLC. The initiative aims to use Iceland as a natural laboratory to understand how magma makes its way from deep in Earth’s crust to the surface — to do so, its organizers have focused on four of Iceland’s most active volcanoes, one of which is Bárðarbunga. The researchers used extra seismometers and global-positioning-system (GPS) stations to bolster the monitoring network maintained by the Icelandic Meteorological Office and the University of Iceland, both in Reykjavik. And they used these to measure the events leading up to and after the eruption with unprecedented detail.

Earthquakes began shaking Bárðarbunga on 16 August. For two weeks, researchers watched as seismic activity marched north and east, towards the edge of the ice cap that covers the volcano. GPS stations measured the ground flexing upward as huge amounts of magma shifted underground. “The seismic shows us the detail, and the GPS shows us the volume,” says Kristín Vogfjörð, a seismologist at the Icelandic Meteorological Office and co-leader of FUTUREVOLC.

For 45 kilometres, the magma crept along, cooling and forming an underground sheet known as a dike. By 29 August, it had made it to the edge of the ice cap and begun erupting into a barren plain called Holuhraun.

Since then, the eruption has spewed at least half a cubic kilometre of lava, making it the largest lava-producing eruption in Iceland since 1947. But the quantity of gas is what has startled scientists most. Chunks of rock collected from the eruption show how gas-rich the lava is; the rocks are porous, filled with air pockets where the gas has leaked out.

With the right winds, the sulphur that Holuhraun produces can reach as far as the European continent, where Austria has recorded more sulphur in its air than any time since the industrial clean-up of the 1980s.

FUTUREVOLC has placed some basic gas-monitoring equipment at its volcanoes, including two types of spectrometer at the Holuhraun site. One measures concentrations of SO2 by studying how it absorbs particular wavelengths of sunlight. The other scans for multiple gasses simultaneously.

Both types of instrument rely on daylight to make their measurements, and the encroaching darkness of the high northern winter will limit their usefulness, says Sara Barsotti, an atmospheric physicist at the Icelandic Meteorological Office. (Even getting to the eruption site, which is remote, is getting harder as the winter sets in.) Researchers will try to continue making as many gas measurements on the ground as possible, and compare those to the rough estimates made by satellites, Barsotti says.

Icelandic officials are trying to work out how much of a hazard the sulphur is and whether they can predict its movement more accurately. The meteorological office has begun issuing forecasts of where the gas is likely to travel each day. Sulphur spikes as high as 21,000 micrograms per cubic metre were measured last weekend in the town of Höfn; the World Health Organization recommends no more than 500 micrograms per cubic metre for a 10-minute exposure.

No one has died in the eruption, and the plume is not high enough to penetrate the stratosphere and cause widespread climate perturbations. But the million tonnes of sulphur emitted so far are an unprecedented experiment in testing the effects of toxic-gas exposure, Barsotti says.

Lessons from Iceland may prove useful in understanding long-term gas exposure in other volcanic regions, such as Japan, Indonesia and Hawaii. In the early 2000s, residents around the Miyake-jima volcano in Japan were evacuated when it began erupting with roughly the same level of sulphur emissions.

In Iceland, the last similar event was a fissure eruption known as the Krafla fires that began in 1975 and lasted on and off until 1984, says Freysteinn Sigmundsson, a volcanologist at the University of Iceland and co-leader of FUTUREVOLC. If the current eruption is tapping magma deep in the crust, as the lava’s volume and chemistry suggest, then it, too, may continue for months or even years.

“This eruption comes at a good time for the project,” Sigmundsson says, waving out his office window at Reykjavik’s red skies. “We don’t see an end in sight.”