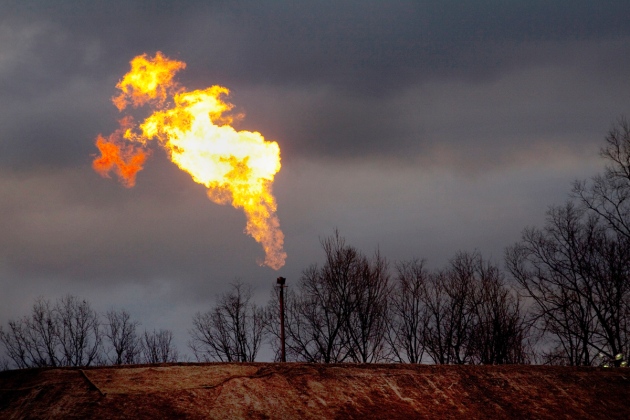 A gas flare burns at a fracking site in Bradford County, Pennsylvania.

For Ohio, a Midwestern state hit hard by recession, the promise of an energy boom driven by hydraulic fracturing, or ‘fracking’, would seem to be a sure route to financial health. Far less certain is whether the technique has an impact on human health. Fracking uses high-pressure fluids to fracture shale formations deep below ground, releasing the natural gas trapped within. With the number of gas wells in Ohio that use fracking set to mushroom from 77 to more than 2,300 in the next three years, the state is the latest to try to regulate a rapidly growing industry while grappling with a serious knowledge gap. No one knows what substances — and at what levels — people near the gas fields are exposed to in the air and water, and what, if any, health threat they might pose.

In a nod to those concerns, Ohio’s legislature passed a bill on 24 May, awaiting signing by the state governor as Nature went to press, that requires companies to disclose the chemicals they use during the fracking process and during the construction and servicing of the wells. However, the bill does not compel companies to divulge a complete list of the ingredients in their fracking fluid before it is pumped underground. Some of those ingredients are deemed trade secrets, a position that troubles environmental groups and increases the problem for researchers trying to understand the risks.

“There is a real lack of data,” says John Balbus, senior adviser on public health at the National Institute of Environmental Health Sciences in Bethesda, Maryland, who spoke at a workshop organized by the Institute of Medicine in Washington DC last month to discuss research strategies for studying the health impacts of gas extraction. “There’s a lot of variability from region to region, in the kinds of mixtures that need to be used for the specific geology.”

Fracking fluids are primarily water and sand, but they also contain chemical additives that aid the horizontal fracturing of shale and the release of natural gas. Some components, such as citric acid and coffee grounds, are benign, whereas others, such as benzene or toluene, could cause chronic health problems at certain doses. Waste water — fracking fluid mixed with groundwater containing high levels of brine and traces of natural radioactive elements — comes back to the surface during the drilling process.

“The big threats to public health are in wastewater pits and storage and also during transportation when you are trucking around contaminated water,” says Deborah Swackhamer, an environmental chemist at the University of Minnesota in St Paul. “You can have spills or leaks or flooding.”

With uneasiness growing about the increasing scale of fracking in the United States, the pressure on companies to be more forthcoming is growing. The Ohio bill would allow a doctor to request proprietary information about fracking fluid when treating a patient who shows signs of exposure to a toxic chemical that might have come from a gas well — but doctors must keep what they learn confidential. An amendment to the bill supported by the Ohio State Medical Association would allow doctors to break the confidentiality rule when professional ethics demands it.

“The end result of any legislation should not impact a physician’s ability to care for his/her patients,” wrote Timothy Maglione, senior director of government relations for the medical association, in a letter to the legislature dated 22 May.

A tougher national disclosure requirement is in the works. Earlier this month the US Bureau of Land Management released a draft version of its rules for fracking operations on federal and Indian lands. Like the Ohio bill, the rules allow companies to withhold trade secrets, but they also put the burden on the firms to convince the bureau that a trade-secret claim is valid. Environmental groups say that even these rules don’t go far enough.

“There is no one chemical-disclosure provision out there that gives the public enough information to know if they’re being exposed to something through natural-gas drilling,” says Thom Cmar, a Chicago-based attorney with the Natural Resources Defense Council in New York City. Testing the air and water near fracking operations could give a clearer indication of human exposures (see ‘Riches, at a price’). A survey by the US Environmental Protection Agency (EPA) will include case studies in five states where fracking occurs. The studies will draw from existing water, air and soil data; test waste water; analyse well design and construction; and conduct toxicity tests. At two sites, the agency will compare pre-drilling testing to post-drilling testing. The study, now a year old, will run into 2014, but initial results are expected by the end of this year.

But even after the environmental data from the EPA roll in, there will still be a dearth of information on effects on human health. “There really is nothing out there in terms of well designed epidemiological studies,” says Madelon Finkel, an epidemiologist at the Weill Cornell Medical College in New York City.

At last month’s meeting in Washington, researchers from the Geisinger Health System, which includes hospitals, clinics and community practices in central and northeastern Pennsylvania, announced a plan to use their own 10-year database of electronic health records to map health trends before and during drilling. The database includes more than 2.6 million residents in a region that has some of the highest concentrations of fracking wells in the United States. “We can at least get a surveillance-level snapshot of what some of the health trends might be,” says David Carey, director of Geisinger’s Weis Center for Research in Danville, Pennsylvania.

Other researchers hope to tap Geisinger’s records for joint projects. Brian Schwartz, an epidemiologist at Johns Hopkins University in Baltimore, Maryland, wants to mine them for multiple health indicators, including trends in asthma cases, which can serve as a bellwether for air quality. His team will overlay these data with computer models for environmental air quality based on EPA monitoring data, which will provide a picture of whether air quality around wells has changed as fracking in the region has intensified and how, where and when pollutants could be affecting asthma patients.

Robert Oswald, a pharmacologist at Cornell’s College of Veterinary Medicine in Ithaca, New York, is taking a different tack: using animal-health reports as proxies for humans. When farmers split their herds between pastures close to and distant from fracking activity, they create inadvertent experimental and control groups. “They’re sentinels for human health,” says Oswald. “If you want to look at reproductive problems, you might be hard pressed to find 100 pregnant women living near a wastewater impoundment pond, but we can probably find 100 pregnant cows.”

His case survey, published in January (R. Oswald and M. Bamberger New Solutions 22, 51–77; 2012), finds two instances of correlation between gas-drilling activity and mortality rates in livestock, but there are several caveats, including small sample size, the fact that the individual cases were all reported by different people, and the fact that toxic sources unrelated to fracking could explain the pattern.

Conducting controlled studies among people will be slow and costly. But Finkel warns that questions about the long-term effects of the fracking boom are too urgent to ignore. “We don’t know the impact on human health,” she says, “and living in blissful ignorance isn’t a solution.”